Peter McLoyd doesn’t care what you think of him. From addiction to advocacy, his story has been defined by overcoming obstacles. From substance abuse to stigma to health inequity, McLoyd has seen it all. At 64, his long and winding road has led him to his current role as the Consumer Development and Advocacy Coordinator at the Ruth M. Rothstein CORE Center, which treats HIV, hepatitis C (HCV) and other infectious diseases.

McLoyd recently sat with AFC staff in his office on a sunny day in June, recalling his past struggles with drug addiction, as well as challenges navigating the health system as someone who is HIV-positive and as someone previously living with HCV. Soft-spoken and well-dressed, McLoyd is honest about himself and the winding road he has taken to where he is today. 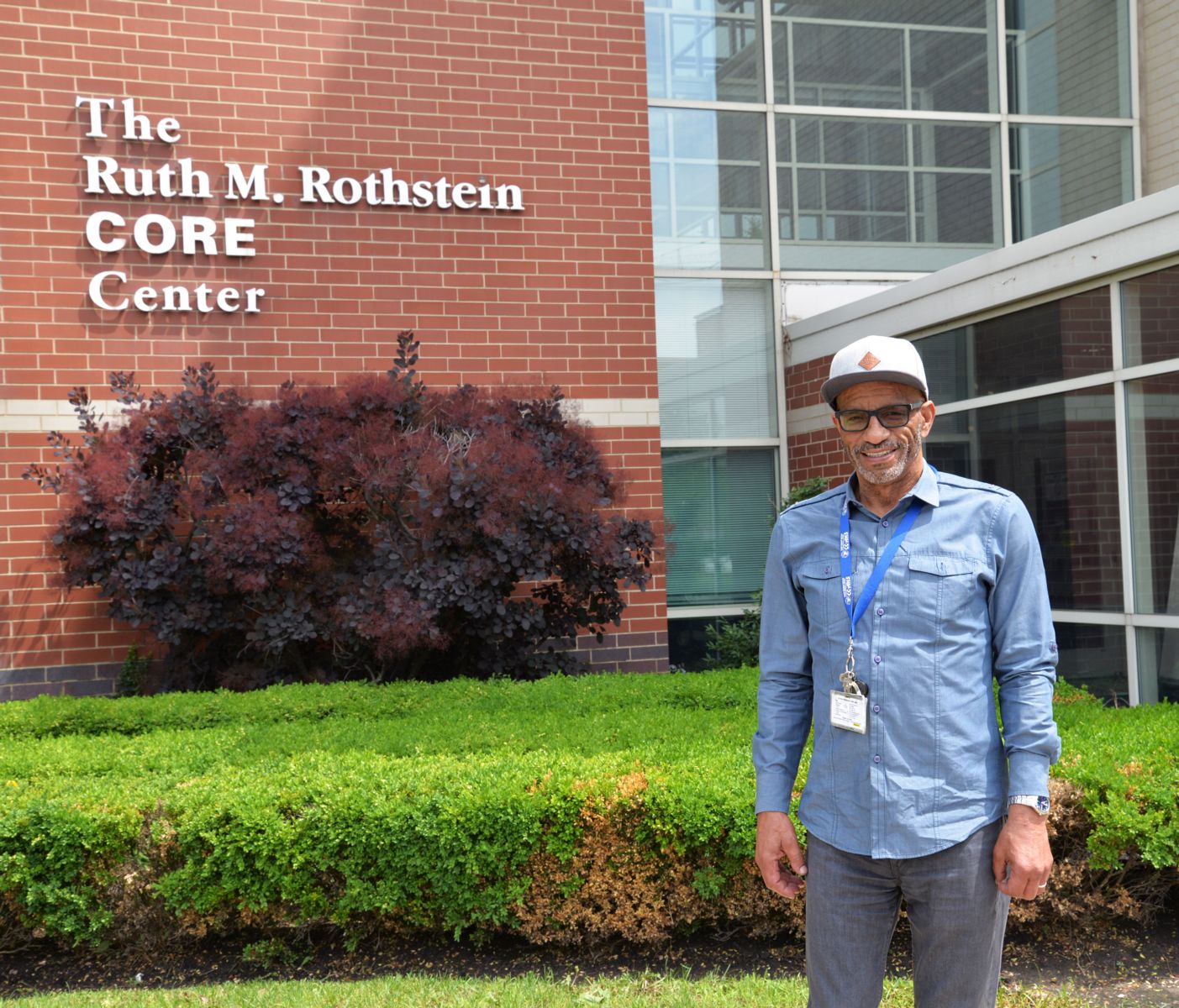 Speaking with a slight twang he developed from a childhood in the South, McLoyd traced his migration to Chicago, where his family moved to better care for his childhood illnesses. The trauma of uprooting his life to a new and foreign city, coupled with other childhood experiences followed McLoyd throughout his youth, until he started experimenting with drugs in high school. By senior year, he was injecting heroin and using cocaine, a practice that continued into adulthood.

Despite his struggles with addiction, McLoyd married and had children, and began work as a steel worker. A workplace injury led to a hospital stay that would impact his life for decades. Before surgery, a nurse entered his room to tell him of abnormal lab work they had discovered.

“I can remember that so clearly, forty years later,” McLoyd recalls. “She said it was hepatitis, ‘There’s no treatment for it and there’s not much we can really do about it, but we want to let you know.’ And that was it. That was how I found out about hepatitis.”

With no treatment and no further education about his condition, McLoyd left the hospital and descended into deeper struggles with substance use. As addiction started to unravel his life, including his marriage and career, McLoyd’s health began unraveling as well. Suddenly plagued with mysterious ailments, including bronchitis, night sweats and sudden weight loss, McLoyd went to numerous ERs looking for answers. Finally in 1995, a doctor suggested his symptoms could indicate an HIV infection and suggested he get tested — but provided no resources on how or where.

Years later, McLoyd is honest about his reaction to the news. “I was disturbed,” he recalls. “But I wasn’t surprised because I knew how HIV was transmitted, and I knew that I had shared needles.”

He struggled with the possibility and considered if he really wanted to know the truth. Even if he was living with HIV, treatment wasn’t widely available and an indifferent health care system gave him no further direction on testing or treatment, just as it had failed him with his diagnosis of hepatitis years before.

“It was a little anger at the fact that they were telling me that I might have an infection that could lead to death and just telling me to find a place to get tested,” McLoyd says.

So he left the hospital, unsure of his HIV status. But chance had other plans for McLoyd and his future. Within the next year, he found himself in jail, where he found a magazine article on Dr. David Ho and his work with HIV-positive injection drug users in New York City.

“That article just really resonated with me,” he remembers. “He was talking about African-American men who were injectors, and I could see myself in that group.”

With newfound hope, McLoyd committed himself to get tested. When he was finally tested in 1997, his illness had progressed to a point where he was wasting to nothing, weighing only 130 pounds and suffering from pneumonia, thrush and numerous other infections. McLoyd found his way to the hospital and toward a new life of health and possibility, since by that time, powerful new HIV treatments were available.

As McLoyd recovered, he realized the full impact of his addiction on his life and well-being.

“Because of my addiction, I hadn’t even noticed that I was basically skin and bones,” he remembers. “In order to deal with my HIV and become the person who I had strived to be as a young man and make a difference in the lives of other people, I had to let the drugs go.”

"I wondered how many other people were like that, who were just kind of left to their own devices and probably didn't make it,"

With the help of therapy and peer educators, McLoyd began to address his struggles with substance use and began proper treatment for his HIV. As he dove into his new life with strength and resilience, McLoyd began to help others treat their addictions and improve their health, and he went from being a participant in the CORE Center’s peer educator program to managing it. From there, he became increasingly involved in HIV advocacy and policy, leading to his current role at the CORE Center.

Reflecting on his own recovery, McLoyd emphasized the importance of role models and representation in the treatment and recovery process.

“I had these role models, I could look at those people and say ‘wow, look at him, look at her, they did this, they can do this.’ Being encouraged and motivated by that was huge for me,” he remembers.

Tacking the hurdle of hepatitis C

It was also due to his involvement with the CORE Center that he finally received treatment for HCV. But as with other aspects of his life, it was not an easy road. As medications emerged to treat what McLoyd now understood to be hepatitis C, he began his first treatment of interferon and ribavirin therapy.

Despite warnings about the severity of the side effects, McLoyd thought he could handle it. After all, he was successfully maintaining his HIV and had overcome addiction. But right away, as McLoyd admitted, the treatment for HCV was a different ballgame than taking his HIV medications. Between pills and injections, he would be knocked out for days, with exhaustion and depression plaguing his body and mind. He made it through treatment largely with the support help of his new wife Kathy, but despite her loving support and the care of his physicians, the demanding treatment failed and did not cure his HCV.

Despite this, he remained hopeful. His optimism followed him into another failed year of HCV treatment, which initially showed promise, but ultimately did not clear his infection. Finally, in 2016, he began another year-length treatment with the new medication Harvoni, and the third time was the charm. Thanks to his upbeat nature and resilience, McLoyd can now say that after forty years and three rounds of treatment, his HCV has been cured. “It’s been a journey,” McLoyd acknowledges.

As McLoyd reflects on the long hard road he’s traveled to get to where he is today, he can’t help but consider the failings of the health system with his own conditions and wonder who fell through the cracks.

“I wondered how many other people were like that, who were just kind of left to their own devices and probably didn’t make it,” he considered.

But despite progress, McLoyd acknowledges the painful reality of health inequity today, especially among people living with HIV and HCV, and the power of pharmaceutical companies and the government in controlling care for those most in need. 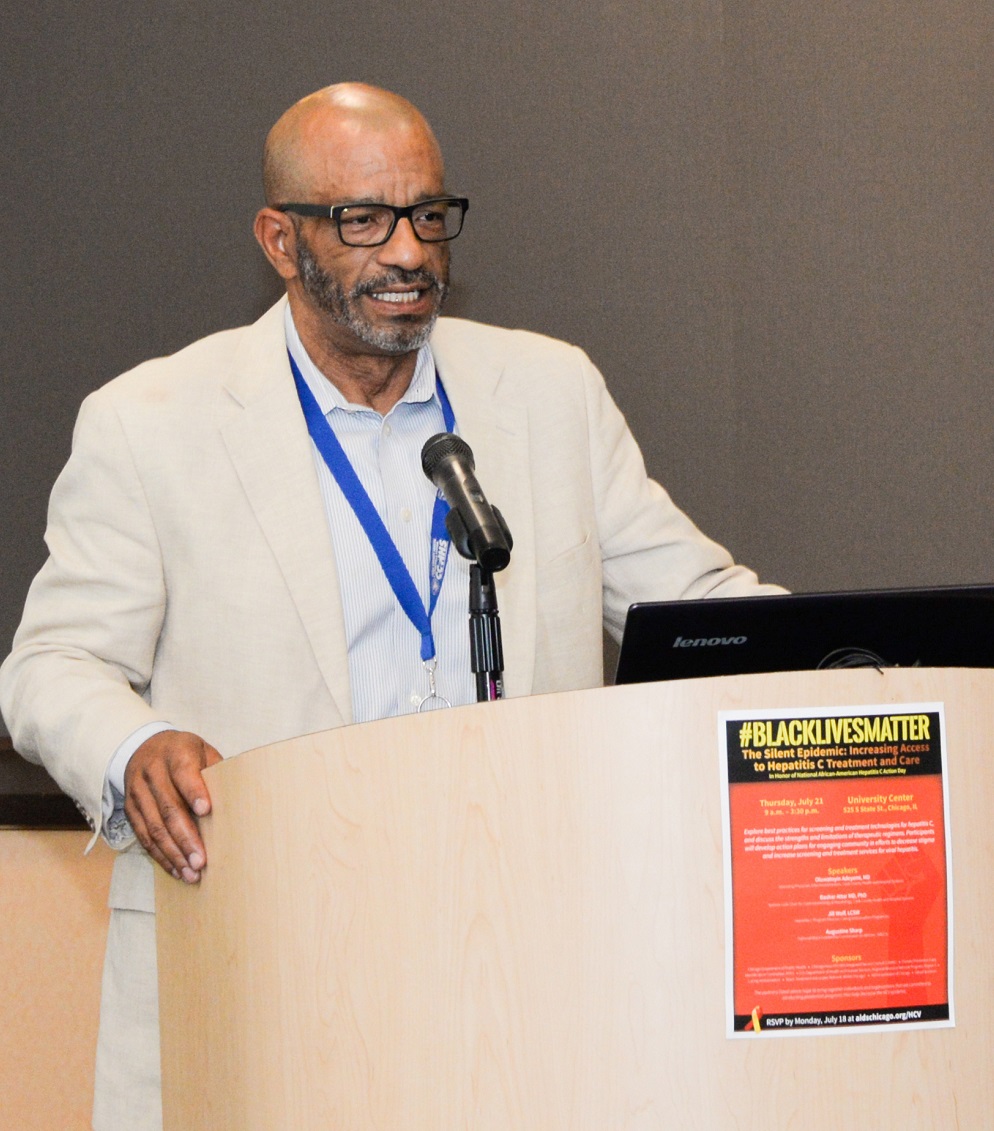 Treatment for HCV can cost upwards of $100,000 and Medicaid programs often deny treatment until the final, most severe stages of infection, when patients’ livers near failure and their health teeters precariously. Though steps have been taken in Illinois Medicaid to expand treatment to those with stage-three infections, thanks to AFC’s advocacy team and others, it is not enough. Such policies put patients in a vicious circle. They must be severely sick to get treatment, but will only get to the last stages of infection without the treatment. In the meantime, physicians tell them to care for their health to ensure they do not reach the last levels of infection that would make them eligible for treatment.

“There’s so much work to be done,” McLoyd confirms gravely, as he acknowledges the pain and frustration patients feel as they see others getting treatment, while being denied care.

“When you see other people getting treated and you’re not being treated, it’s just another way the world has rejected you; it’s very hard on the spirit,” McLoyd says. “It’s difficult to give people hope.”

Despite this, McLoyd is hopeful for the future of HIV and HCV treatment and the possibility of many diverse voices coming together to demand change. He particularly hopes his status as a heterosexual Black man and as a former injection drug user can influence the discussion around HIV and HCV treatment and prevention and lessen the stigma, particularly among heterosexual Black men. The power of representation of Black men struggling with addiction and an HIV diagnosis, from the magazine article to the peer educator program, encouraged McLoyd to transform his life and become the man and voice for change he knew he could be.

“As these efforts to end AIDS continue, my hope is that all voices will rise to the top to provide input and direction on what it requires to end AIDS in our communities,” he says. “We’re all in this together.”

Categorized under Advocacy, Chicago, Health insurance, Illinois and Inside Story.