Before she met with State Representative La Shawn Ford at the Illinois state capitol building, Jacalyn Boyd had never had much interaction with her elected officials. But on April 9, Boyd, a peer navigator on the Austin Health Center of Cook County CBC Initiative in Chicago’s Austin neighborhood, joined more than 100 advocates to meet with their elected officials and advocate for their support in the fight against HIV/AIDS.

This daylong event is part of the AIDS Foundation of Chicago’s Advocacy Days program, which equips community advocates with the knowledge and skills to meet with their state representatives and ask for their support for statewide services for the estimated 41,000 people living with HIV/AIDS in Illinois. 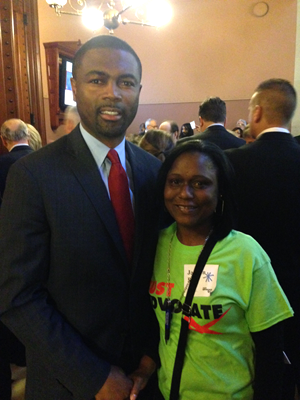 She and two other peer navigators from the CBC Initiative rode a packed bus from Chicago down to Springfield to speak with elected officials about two important issues: protecting HIV/AIDS funding from a possible $4 million budget cut and introducing a “fair tax” in Illinois, which would replace the “flat tax” currently written into the state constitution.

“I’m going to Springfield to ask for support for those living with HIV,” said Boyd. “I have friends who have died from HIV, and some who are still living with this disease. This problem needs help from people in our state government.”

After attending a training session led by AFC’s policy team, the advocates were grouped based on their elected officials and sent with a leader to the capitol building.

Boyd’s state representative, La Shawn Ford (8th District), was in the House chambers that afternoon. With help from AFC’s Interim President/CEO John Peller and group leader from the Illinois Alliance for Sound AIDS Policy (IL ASAP), Boyd and her group sent a card to Ford at “the rail,” a public area just outside of the House chambers where representatives will emerge to meet with selected lobbyists and other visitors. Their distinctive green t-shirts helped them stand out amid the sea of suits and ties.

Boyd prepared her statements for Rep. Ford and practiced them, with support from her group of advocates.

When Rep. Ford emerged from the chambers and called Boyd’s name, she approached the rail. Ford walked around the barrier and joined the group of advocates, so he could better hear and respond to Boyd’s call for a fair tax initiative and protection for HIV/AIDS support in the state budget. Ford affirmed his commitment to those issues, and then shook hands with the group and posed for photos.

“I had to do what I had to do,” said Boyd about the experience. “After it was over, though, I no longer had stage fright!”

After each group attempted to meet with their elected officials (often leaving letters for those senators and representatives in their offices), they came back together in a packed conference room. The level of excitement was high, as advocates shared their experiences with one another before remarks were made by Rep. Greg Harris (13th District), Rep. Rita Mayfield (60th District), and Senator Heather Steans (7th District).

AFC will host another Advocacy Days event on May 14. Click here to register. 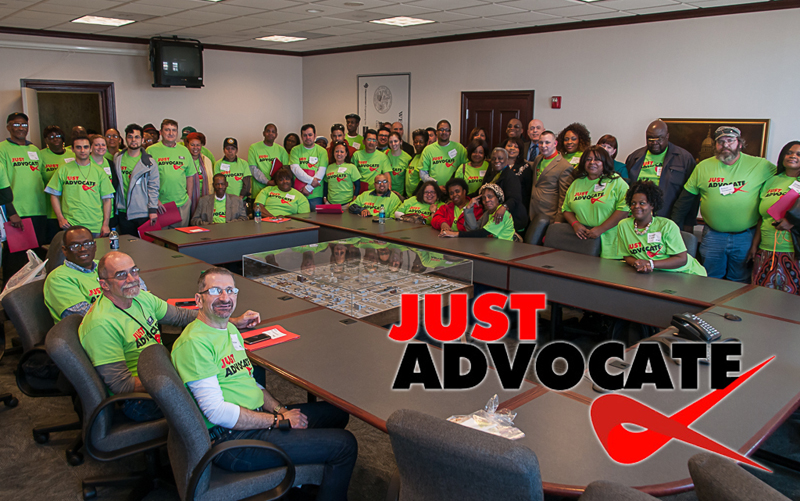