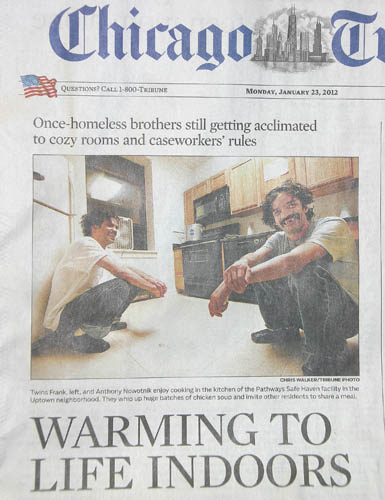 The powerful story of Frank and Anthony Nowotnik, 43-year-old twin brothers recently housed after a hardscrabble life of homelessness, was featured in the Monday Chicago Tribune.

We encourage you to read Colleen Mastony’s honest and compelling story, “Warming to Life Indoors.”

The inseparable Nowotnik brothers, as the story describes, are still coming to terms with the difficult transition from life on the streets to the great indoors. They are also fighting alcoholism and receiving treatment for bi-polar disorder. The Pathways Safe Haven, where they live, allows alcohol use as part of the “housing first” philosophy that emphasizes the need to house chronically homeless people.

Frank and Anthony are two of more than 200 Chicago homeless people housed since last winter, thanks to the 100,000 Homes Campaign in Chicago.

Last winter, the city of Chicago selected the AIDS Foundation of Chicago (AFC), in collaboration with the Corporation for Supportive Housing and the Chicago Department of Family and Support Services, to implement the 100K Homes Campaign locally.

The goal of the national campaign is to house the most vulnerable homeless people in the United States.

The Tribune first reported on the Nowotnik twins last winter, when they were still living under a bridge. At that time, Anthony had been identified by AFC for the 100K Homes campaign after he was hospitalized for a head injury. He was offered a room at the Lake View YMCA, but he refused to move in without Frank.

Together, the brothers are now giving it their best shot at Pathways.

It’s critical to emphasize this: Housing chronically homeless people means saving significant taxpayer dollars. There is a savings of $1 million for every 100 chronically homeless people living with chronic medical conditions who are housed in permanent supportive units with intensive case management, according to recently published data in the Journal of Health Services Research.

Permanent housing like Pathways, which also provide intensive supportive services, means fewer trips to the hospital for the homeless — among other reductions in health care and social services costs.

So, housing the homeless is the right thing to do AND it saves money, a solution that works for the most vulnerable people and for those paying the bill.