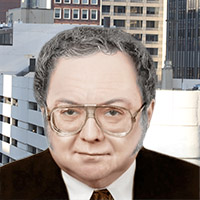 I am an epidemiologist. Today, due to the COVID-19 pandemic, my profession now is understood by many people who inquire about it. This is the backstory of an important occurrence in my rehabilitation from a stroke.

In October 2003, I had the first of my four strokes over the past 17 years. In a brief moment, I suddenly became a person with major disabilities. I entirely lost functioning of my arm and leg on my right side. I spent the next 90 days in the hospital. Nevertheless, I got back to work in February 2004. Each time I had a stroke, I had to struggle to be considered a disabled professional.

Upon my return home after my first stroke, my wife had an idea: I should become an election judge. Her rationale was that it was my civic duty. But her real purpose was to teach me that I still was the same person as before. It was a brilliant idea. Whenever I encountered a roadblock, it was easy to give up. She would not let me quit. Although I didn’t initially see how it could help, it did turn out to be one of her better ideas.

My next challenge, however, was to convince the Chicago Board of Elections that a disabled person could serve. After some very long discussions, I succeeded. I was appointed for the next election, a primary to be held soon.

I was thrown into being a team member for 16 hours on Election Day doing hands-on tasks taking these voters’ decisions. I had to deal with my partners. None of them cut me any slack. Right or wrong, they wanted me to pull my full weight.  Not only did I have to do all of the many secretarial tasks associated with being an election judge like entering names on voter forms, but I also had to do the many physical tasks setting up the polling location. Initially, both types were hard, but I stuck them out.

For the next ten years, I worked every election - Primary, State/City, and Presidential.

Usually a five-person team is appointed for each polling site in the City of Chicago. An odd number of judges is appointed representing the two major parties (Democrat/Republican). Although all judges appointed are considered equal, there is a learning curve that is affected by experience. As time goes on, more experienced judges have encountered all strange situations that occur in a polling place. It requires a cool head and tact. Ultimately, I became a well-respected leader of teams that often were very new each time.

Regardless of your political philosophy or party, this election is absolutely critical to everyone in the U.S. There simply are too many divisive issues now that face us. Every person entitled to vote MUST VOTE.

Civic responsibility has never meant more than it does today. 2020 started off as a difficult year on two fronts: the health front and the racial justice front. Every individual has a different view about our society and the critical issues that give existence to their lives. For people living with HIV and AIDS as well as those who want to support the community, your civic responsibility – and the consequences of the coming election – have ultimate importance. Vote and make sure your vote counts this year.

As a veteran election judge, I encourage everyone take advantage of an early voting option that feels safest to you and exercise your civic responsibility. Vote now!