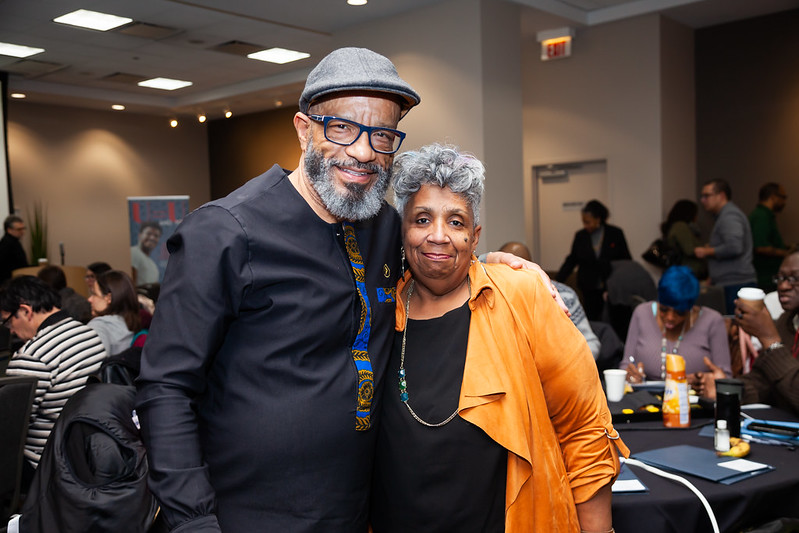 When you talk to Judy Brown, it is immediately clear that the 69-year-old Chicagoan is passionate about advocating for the people around her. Every day, Judy commits herself to helping others and has been doing so since she and her husband tested positive for HIV in 1993. Judy is an active member of AIDS Foundation Chicago (AFC)’s Ryan White community advisory board and works with Universal Family Connection Inc. to support Black women in underserved communities connect with health and wellness resources. Despite the challenges that Judy has faced in her life, she has maintained a positive attitude and has always worked to both support and find support from her Chicago community.

Judy was born and raised on Chicago’s West Side. She remembers her childhood fondly, recalling growing up in a big house with her parents, two sisters and brother. In 1965, when Judy was in eighth grade, she met her future husband. The two were married in 1971 and were young parents, giving birth to their first daughter when Judy was 15. The couple later had two more children whom Judy adores.

In addition to being the mother of three and eventual grandmother of many, Judy worked in the medical field as a certified nursing assistant, a phlebotomist (someone who draws blood) and a dialysis nurse. She lived a busy lifestyle, both professionally and personally, and she was caught by surprise when her and her husband tested positive for HIV in 1993.

Adjusting to life with HIV

When Judy tested positive for HIV in 1993, she did not have the same resources and information that is available today. At the time, HIV testing and medication was relatively new. In 1985, the Food and Drug Administration (FDA) licensed the first commercial blood test to detect HIV, and two years later, the FDA approved the first medication to fight HIV, AZT. Despite the limited knowledge and treatment that existed, Judy was devoted to embracing life after testing positive.

“I’ve never been ashamed of it,” Judy said. “It’s just something that happens, and I accept it and life goes on. It didn’t make me depressed. It was just a change of lifestyle.”

Beyond medication and treatment, Judy carried this positive attitude with her as she navigated living with HIV. She and her husband were lucky to have a strong support system made up of their family and friends, but she still remembers feeling misunderstood by people that did not know her personally, such as new doctors.

In the 1990s, there was not a comprehensive understanding of HIV within the medical field. Judy recalls her doctors often asking her invasive and inappropriate questions about her health, leaving her feeling hurt and stigmatized.

Judy witnessed similar things happening while she worked as a dialysis nurse at West Suburban Dialysis Center. Sometimes, she was the only nurse who was willing to take care of patients that were living with HIV.

“They were scared,” Judy recalls of the other nurses. “I didn’t have a problem with it. I just always believe in treating people the way I want to be treated.”

In 2005, Judy’s husband passed away from colon cancer. In order to cope with his death, Judy joined a support group for individuals who were grieving the loss of a significant other. This support group helped her process her emotions and feel connected during a time of loneliness.

Judy expanded her support system a few years later by joining a women’s support group through the Chicago Women’s AIDS Project. Judy eventually became a group facilitator and was able to create a strong, welcoming community where she inspired other women to advocate for themselves at their doctor appointments.

It was in these support groups at Chicago Women’s AIDS Project that Judy was introduced to Angela Jordan, AFC’s Intake and Referral Manager. Impressed by Judy’s work and charisma, Angela informed Judy that

AFC’s community advisory board is made up of individuals who are living with HIV and use their firsthand knowledge as participants to improve the organization's programs.  For Judy, joining the board has been an incredible opportunity to learn from her peers. She loves listening to the other board members share their thoughts and ideas and provide feedback on the services that are available to them.

Since joining the board, Judy has expanded her knowledge of case management and has been connected to a new case manager through AFC. By improving her understanding of the different types of case management, she has not only been able to more easily access the services she needs, but she has also been able to pass information about available resources and programs to other women who might need them.

“She is passionate about making sure services are geared towards all women, especially African American women,” said Angela, who facilitates the community advisory board. “Ms. Judy has truly been an asset to the group.”

Judy’s service on AFC's community advisory board encapsulates the empathy that she exhibits every day. Whether it is being a mother, grandmother, nurse, group facilitator or board member, Judy is driven by her desire to learn from and help others.

“I really love advocating,” Judy said. “Sometimes I don’t know what to say, but I know what’s in my heart.”

To learn more about and support women living with HIV click here.