"I made it through the storm": George Scroggins and the act of moving forward

Access to Care is an in-home substance use counseling program run through the AIDS Foundation of Chicago in partnership with housing agencies across the city. George Scroggins became the first client of Access to Care in 2015, and he believes that the case management and housing services he receives from AFC and Heartland Alliance saved his life. 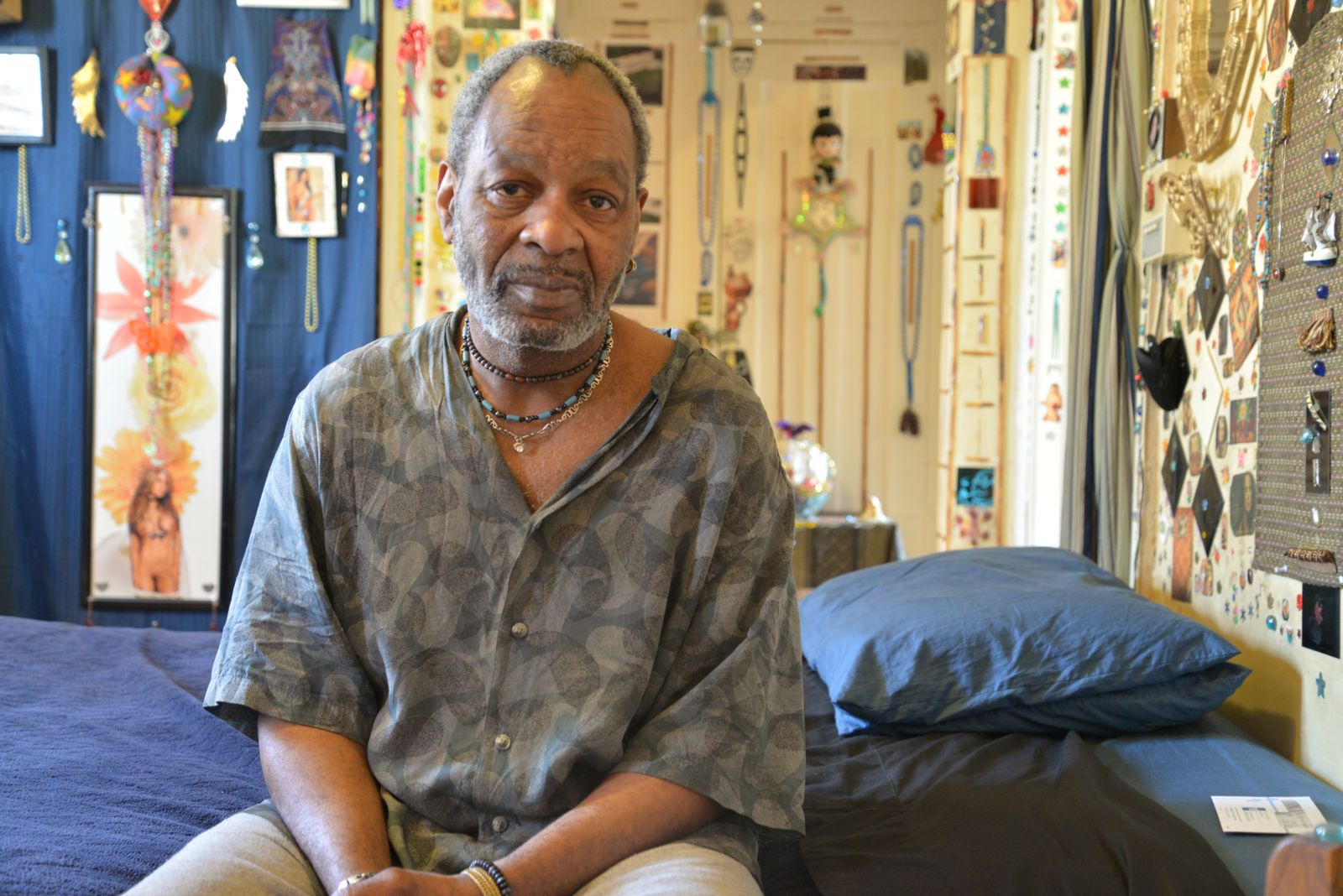 George Scroggins sits quietly on his bed after saying goodbye to his Access to Care counselor. His peppered black hair and beard frame his wide eyes and slight smile, and his hands fold over each other in his lap. Scroggins is surrounded by color and movement, his walls adorned with hundreds of jewels, pictures from magazines and scraps of fabric, his ceiling boasting mobiles constructed from yarn and tiny plastic toys.

His eyes light up as he describes finding the materials used to decorate his apartment so elaborately, and he quickly points to his favorite pieces, including the side table that he recovered with thick, fuzzy, leopard-print fabric and the necklaces that he strung together with bright, mala-like beads. "I'm steady hanging stuff on the wall. It's something to keep my hands busy. I make jewelry, too! See all of the jewelry I make? I am good at some things," Scroggins says proudly. "I mean, I can't read, but I ain't slow," he emphasizes, as he rolls the colorful string of beads in his hands and some of the light fades from his eyes.

"George, where was you when they was giving out education?"

Scroggins is a part of a large family, the sixth child in a series of five brothers and one sister, and he recalls growing up in Chicago’s Robert Taylor Homes, a now-defunct housing project, with a hint of anxiety tinging his voice. "There were different gangs in each building, shootings every night; I couldn't even go outside. A lot of people died."

In addition to outside violence, Scroggins remembers his father's abuse of his mother, his siblings and him. While his mother worked multiple jobs to support seven children, Scroggins' father stayed in their home, often drinking alcohol in excess. "I had a large family, and I ain't ever remember my old man having a job. I remember him being an alcoholic though, and abusing my mom and abusing us kids."

Growing up in such a stressful environment definitely took a toll on Scroggins, and he remembers that he soon stopped attending school because his fear took precedence over his education. "When I was young I never went to school. There were always gangs around the school, and I was afraid. It was hard. Now I ask myself, 'George, where was you when they was giving out education?'" Scroggins was soon labeled a problem child, but he describes his actions as a sort of self-protection, a way to blend in and detract attention. "They told me I was a problem child, but I was like, hey, when you have to live around here, you have to be a problem in some kind of way."

When Scroggins was 16, his mother died, and he knew then that he needed to find a job to support himself. Because of his absence from school, he could not read or write, making job applications difficult to impossible. One day, though, he applied to Acme Barrel Company, and he was hired to work repainting the company's garbage cans. "They didn’t ask me if I knew how to read or nothing, and I met this guy who filled the application out for me. I got lucky. I kept that job for a long time."

"I didn’t have anywhere to go; all my family had moved away, so I was just out there bad."

When Scroggins lost his job at Acme Barrel Company, though, he had nowhere to turn. "I never was a quitter," Scroggins says, "but it was rough." Scroggins couldn't find another job because of his inability to read and write, and he no longer knew where his brothers and sisters lived. He was left to fend for himself.

"I was homeless for about ten years after I lost my job, and after that everything just went bad." Scroggins roamed around the city during the day, trying to stay out of trouble, looking for any sort of work he could find, struggling with alcohol and drug addiction. "Sometimes I stayed in abandoned buildings," he admits. When asked if he ever got caught, he sighs and continues, "No, but sometimes I wished that I would. At least then I would have had a roof and food."

Scroggins finally found shelter at the Pacific Garden Ministry, but he remembers that homelessness was a very difficult transition for him. "I wasn't brought up that way, to not have a job. My grandma owned three buildings, my mother always worked, so I ain't a quitter. When I was living at the mission, I started to just give up. Sometimes I would pray that people might come to the mission and need someone to do some work for them."

During his stay at Pacific Garden Ministry, Scroggins became sick enough that he needed to spend some time in the hospital; he had no idea that he would receive the blessing of permanent housing while he was there. "While I was sick in the hospital, I met my first case manager, and she told me if I worked with her she could find me a place. She eventually found my apartment for me, and I've been here ever since."

"[JM] motivates me; she reminds me that I've gotta keep on trying."

Scroggins has lived in his new home for years now, and he credits his permanent housing with allowing him to quit using drugs and drinking alcohol. "I kicked drugs when I came here. I'm through, man. I got tired of beating myself up." Scroggins remembers friends who overdosed on drugs, noting, "It was crazy back then. You can only do so much to yourself."

In July 2015, Scroggins became the first client of Access to Care, AFC's in-home substance use counseling program. Scroggins' Access to Care counselor, JM (abbreviated to preserve confidentiality), says the program is unique because "the clients are not mandated to treatment — they get to decide if they want to engage in care."

Scroggins appreciates his monthly sessions with JM, and when they meet, they talk about his past experiences. These conversations have helped Scroggins understand that he used drugs and alcohol as a way to numb a lot of the pain his childhood caused. JM thinks highly of Scroggins, saying, "George has begun to realize that the person he can be if he drinks is not who he wants to be. He has made great strides to become a better, more self-aware person."

Luckily, Scroggins thinks just as highly of JM, creating a highly beneficial relationship. "[JM] motivates me, tells me that I have to keep on going. At one time, I was about to give up, just say forget it. I know a lot of people who just said forget it. But she tells me, 'You can't give up, George.'"

Today, Scroggins feels blessed. He meanders through his small apartment, showing off each room and the furniture that fills it, seemingly breathing in color and life from the space he has spent years creating. "I'm 60 years old, and I'm glad that I'm 60 years old. I still thank the Lord every time I get up in the morning. I'm gonna keep walking until I can't walk no more. Like I said, I ain't a quitter."

Categorized under Housing and Inside Story.