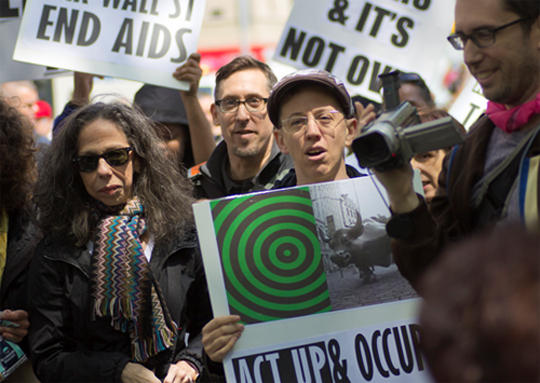 AIDS activism has a rich history of taking advocacy to the streets, into city halls and state houses, and into American consciousness.

Last week, veterans of ACT UP — the AIDS Coalition to Unleash Power — joined the Occupy movement in New York to advocate for a small tax of Wall Street trades to benefit people living with HIV. Together, the 25-year-old ACT UP and the more fledgling Occupy movement made for a natural pairing, said Julie Davids, director of organizing and mobilization for the AIDS Foundation of Chicago.

“ACT UP has always looked at the AIDS crisis through an economic justice lens and has always recognized that obstacles were rooted in greed and the profit motive," Davids told the Associated Press. (Here’s a link to the AP story on the protest.)

Davids, who is also the coordinator for the HIV Prevention Justice Alliance, was front and center at the protest. She took a few moments to talk to answer Inside Story’s questions on what AIDS activists were trying to accomplish and why Occupy makes a lot of sense as a movement.

Inside Story: What was the nature of your past involvement with ACT UP?

Julie Davids: I joined ACT UP Philadelphia in about 1990 as I was finishing college. I stuck around for about 13 years and then continued to be an ally of the group from afar.  I feel like most of the things I learned, I still use every day.

IS: Do you have a specific ACT UP memory or two you can share of a powerful experience through activism?

JD: In 1999-2000, seeing hundreds of people in Philadelphia find their voices, to speak out against what our government was doing to block access to AIDS treatment around the world was particularly moving.These were mostly African-American people living with HIV and their community members, many of whom were dealing with substance abuse issues, and they felt so strongly that no one should be denied access to the treatment that they'd seen make such a difference in their own bodies, families and neighborhoods.

They came out on the streets for this issue in the heat of the presidential campaign, and were a pivotal part in forcing the price of drugs in poor countries down to about $150 a year. Policymakers used to say that there was no way to get treatment to Africa … that we were going to lose a generation … that the only thing we could do is prevention. And these folks and others proved them wrong.

And overall, I think the experience of coming out as a young queer person as a member of ACT UP was incredibly powerful, and showed me that society has much to learn from the lives of LGBTQ people — instead of trying to force us into little boxes and little marriages and big old warplanes.

IS: What prompted you and other AIDS activists to get involved with Occupy? What did you hope to achieve?

JD: We are part of Occupy for similar reasons as so many others — our strong belief in economic justice and direct action. In the case of this action, we are supporting a demand that crosses over between our movements in a very explicit way — taxing the 1% who are reaping the personal benefits of sowing economic turmoil while generating desperately needed funds for HIV/AIDS, healthcare and other social spending.

IS: What does Occupy share in common with the ACT UP movement?

JD: Occupy shares the passion of the ACT UP movement, the creativity and the knowledge that these are life-and-death issues. Both movements, like all meaningful movements in the United States, struggle with issues of race, class, gender and overcoming the heterosexism that is the basis of the U.S. power structure.

IS: How are they different (beyond the more specific focus of ACT UP)?

JD: What's really clear is that the militarized police crackdown in our society that protects late stage capitalism is much further along these days. While ACT UP, particularly New York, was surveilled by the FBI and targeted by agent provocateurs, the big ACT UP mobilizations and sneaky affinity actions were able to do things like shut down the FDA campus. I don't think it would be impossible to do that today, but it would be a lot more difficult. The restrictions of our rights to assemble and speak out and protest are substantial and have hurt all of us.

Since the days of an ACT UP network with hundreds of chapters across the country, technology has irrevocably altered how we build and sustain our movements. It's interesting to think about what it would look like if ACT UP emerged today, if now there was the AIDS epidemic in our communities with no treatment available and such widespread phobia, violence, stigma and bias… and at the same time we had Internet and smart phones.

In the time of the ACT UP network, the latest thing was VHS video cameras. You can see evidence of that in the documentary films now coming out that primarily feature ACT UP New York in its early years. I'd hope that the technology today allows diverse Occupy locations to all tell their stories, not just New York.

IS: What was your experience like joining Occupy Wall Street this week?

JD: Every time I've had the opportunity to participate with Occupy Wall Street it's filled me with hope.

IS: Did you feel it was a success?

JD: I do!  There is a visible bridge between generations of AIDS activists that's much stronger than I've seen in years. And both in the streets and online, it was powerful and healing to see people reuniting who had survived so much together. And I think it made the demand for a Robin Hood tax — a teeny tax on stock transfers that could generate billions of dollars — very clear.