In or Out of Prison, Iranian Doctors Find Way to Help 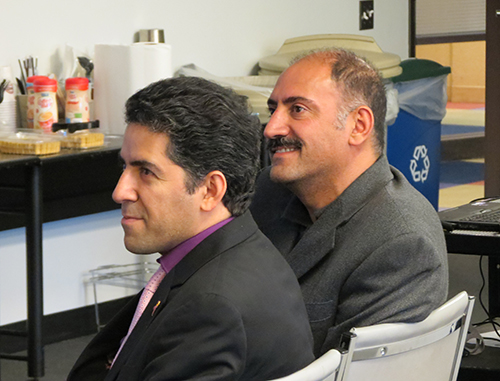 Dr. Kamiar Alaei, on left, and his brother, Dr. Arash Alaei, at the AIDS Foundation of Chicago, November 2012.

For more than a decade, Dr. Arash Alaei and his brother Dr. Kamiar Alaei made quiet but revolutionary changes in Iran’s healthcare system, focusing on harm reduction practices for people forced into the shadows of society, including LGBT Iranians, sex workers and injection drug users.

They garnered millions of dollars for their innovative HIV/AIDS treatment clinics and built coalitions among diverse groups, including deeply religious leadership.

It all came to a dramatic halt in 2008, when the brothers were arrested without charge and thrown into solitary confinement.

They were locked in unlit cells not much larger than a closet. They had no way to communicate with even prison guards, let alone family members, and could only occasionally slip paper under the door of their cell to ask to use the bathroom.

Later, their lawyers learned they were charged with “communications with an enemy government” because of their work organizing AIDS conferences and partnering with foreign governments and non-profit organizations to train health care providers in harm reduction practices.

On Wednesday, the Alaei brothers shared their experiences in a lecture at the AIDS Foundation of Chicago office on the South Loop. Their ordeal dragged on for years. With the help of the international HIV/AIDS community and groups such as Amnesty International and Physicians for Human Rights, Kamiar and Arash were finally both free and reunited in September 2011.

Though unable to return to Iran for fear of re-imprisonment, they have continued their work across the globe. Last year, the brothers received the prestigious Jonathan Mann Award for Global Health and Human Rights at a ceremony in Washington, D.C., and were awarded the first AIDS Society's Elizabeth Taylor award at this year’s AIDS 2012 conference.

After several months in solitary confinement, the two joined the general prison population, reeling from one of the most traumatic experiences of their lives. And yet, once they recognized that they were surrounded by drug dealers, commercial sex workers and drug addicts, an ironic and surprising opportunity presented itself.

“We realized we were surrounded by our target population!” said Kamiar.

Freedom of the Mind

Rather than despair at their unfortunate circumstances, Kamiar and Arash got right to work. They began educating prisoners on health and hygiene practices, created a smoking cessation program, led an exercise program that eventually included 500 prisoners and encouraged prisoners to take advantage of the prison’s clinic.

“We found that many prisoners had made a prison of their own minds,” Kamiar said. “We had to help them break out of that, and encourage them to be involved in their own lives.”

To that end, they began a “Prisoner of the Week” tradition, recognizing prisoners who were making positive improvements. They prompted prisoners to teach each other languages, such as English, French and Arabic. Kamiar said he picked up Spanish by participating in these language lessons. They used their allocated phone minutes to contact publishers and grew the prison’s library by 5,000 books. The brothers encouraged the artists among them to pain murals on the prison walls.

“From morning until night, these prisoners were busy!” Kamiar said.

No matter their circumstances, it seemed the Alaei bothers’ spirit could not be stifled, and they refused to stray from their mission of social justice and harm reduction.

When the jail administration became agitated with the brothers’ organizing activities, they were separated – Arash to the kitchen, Kamiar to the bakery.

There, they decided to improve the health and safety of these operations that fed the prisoners, and instituted new hygiene practices in the bakery.

The brothers credit their deeply ingrained passion for social justice in part to their father, who was a teacher. He opened their home to poor students, tutoring them for free.

“There were always students around, the afternoons, in the summers,” Kamiar said. “My father taught them and encouraged them to go to university.”

Another experience in their childhood, the unnecessary death of an uncle, made an impression.

“When I was age nine, my uncle had a heart attack,” Kamiar said. “He had also had some alcohol, which was illegal. He was scared to go to the ER because they would find alcohol in his system. So he waited for hours for the alcohol to clear his system. Then he went to the hospital the next morning. He died three days later, because he did not seek treatment immediately after his heart attack. So, we work for people who are disadvantaged.”

Both brothers earned medical degrees and focused their work on stigmatized populations in Iran: HIV-infected drug users and sex workers, and LGBT individuals, also at high risk from HIV infection. It was from the start a battle against stigma. Much like the U.S., initially, the government refused to acknowledge the AIDS epidemic. 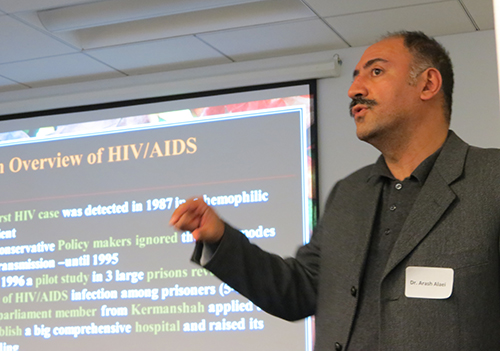 “The official stance of the Iranian government was that because there was no injection drug use in Iran, and no LGBT people in Iran, so there was no AIDS in Iran,” Arash said.

They forged ahead, establishing clinics in 67 Iranian cities focusing on comprehensive care for HIV/AIDS, other sexually transmitted infections and drug addiction.

They focused on treating all of a patient’s needs. Severe social isolation was at the root of problems facing many people living with HIV.

“We created space for LGBT people and commercial sex workers to meet each other and build support for one another,” Arash said. “This sense of community allowed them to have a voice, find friends and build a community together.”

In Iran, as in other countries, people were dying from HIV stigma.

“We realized that 60 percent of the mortality among HIV/AIDS patients was due to suicide. These people needed counseling before treatment,” Kamiar said. “One patient we talked to had no physical contact with another human being for two years after he found out he had HIV. He had not hugged his mother in two years. No one shook his hand for two years.”

“We talked to his family and educated them and the next day he went in for treatment at a clinic,” he said.

The brothers took a comprehensive approach not only to patient care, but to coalition building as well. After years of misinformation about AIDS spread by government and social leaders, the nation of Iran was primed to reject any programming that benefitted AIDS patients, who were severely stigmatized.

Perhaps the greatest achievement of the brothers’ respective careers was this coalition building, said Daliah Mehdi, chief clinical officer for AFC. By bringing people together, they were able to make real systemic change.

“What they were able to do was stay out of party politics and be real advocates for people living with HIV/AIDS,” Mehdi said. “They were able to take controversial ideas and frame them in a way that was palatable to people who would not otherwise be allies.”

"President Ahmadinejad doesn't support these clinics, but he cannot disentangle them from the health care system." -- Dr. Kamiar Alaei

Kamiar and Arash purposefully worked to integrate HIV care into the country’s health system at a basic level, detached from politics and individual allies who could be whisked out of power in a regime change.

“We got millions of dollars in international money, and then integrated that into the health care system of Iran,” Kamiar said. “Now, President Ahmadinejad doesn’t support these clinics, but he cannot disentangle them from the health system.”

That was a “revolutionary” accomplishment, Mehdi said.

“The way they embedded HIV care into the health system in Iran, in a way that did not depend on them alone to sustain, and did not depend on any particular politician to support it," Mehdi said. "They changed an entire system, just two people, by building bridges. They are quiet heroes.”