In Plain Sight: shining a spotlight on women living with HIV

by Mirhanda Alewine and Eryn MacNeil

In Plain Sight, from Chicago’s History Moves “mobile museum” project, aims to engage communities in conversation about the history of women living with HIV in Chicago by highlighting the stories of participants in the Women's Interagency HIV Study (WIHS). Eryn MacNeil and Mirhanda Alewine, two AFC staff members, had the opportunity to attend the opening reception for the exhibit, and they share their reactions below. 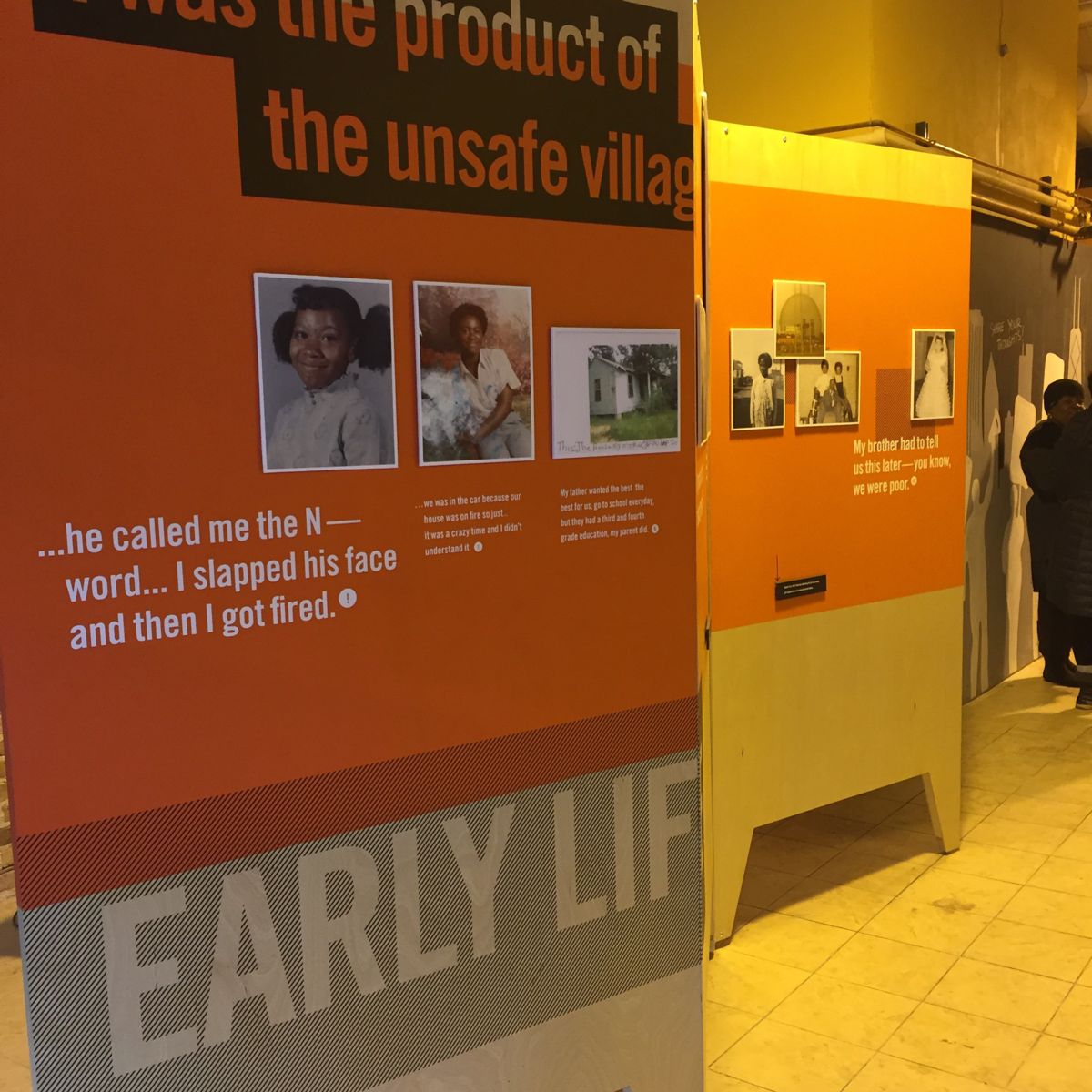 Mirhanda: I've got to say, when I first heard about the In Plain Sight exhibit, I was really excited to see what approach they had taken. Since I started working at AFC, it has become pretty clear to me that HIV-focused art is often centered on men, so it was really cool to me that someone had taken the time to focus on female long-term survivors!

Eryn: I definitely agree. All we really knew going in to the exhibit was that it was focused on women living with HIV, but that's relatively broad. After spending some time exploring, I began to understand that the approach of the project, at least as it came across to me, was to coalesce the similarities between each woman's individual story into one overarching narrative of what it was like for a woman to be diagnosed with HIV in the 1990s.

M: It took me a while to understand that, too. To give some visual context, the exhibit was set up as a sort of physical storybook that attendees got to walk through and experience at their own pace. The installation used four sets of bright orange, door-sized panels to serve as the bones of the exhibit, and each set represented a different "chapter" of the collective experience that the curators were presenting. I found the layout a little confusing at first, but after I gained my bearings, I really enjoyed the more free-form experience of gravitating toward whichever section I was most interested in.

E: I agree, I think we were both a little lost at first, but embracing that feeling and jumping in feet first actually made for a pretty cool experience! We also had the opportunity to speak with Dr. Jennifer Brier and Matt Wizinsky, the curators of the exhibit, to learn more about the reasoning behind some of the design and content decisions. Wizinsky mentioned that the exhibit was less about providing any sort of concrete timeline and more about the narrative arcs that are shared among the women.

M: And the four themes on which the exhibit focused really allowed that vision to shine through. The sections were Early Life, Crisis, Diagnosis and Still Surviving, and no matter which section you were looking at, the collection of quotes printed on the panels made it easy to recognize the similarities between the women and their stories. The common thread of their optimism really stood out, with the exhibit highlighting quotes like, "I did not let my HIV status stop me nor did I let people stop me." That quote could have belonged to any of the women. Also, can we talk for a minute about how the quotes were chosen?

E: Yes! I was so interested to learn that the women were involved in every step of the process, including choosing the quotes. While we were at the exhibit, I remember you wondering out loud how the women felt when they saw the exhibit for the first time.

M: You're right—I had so many questions! Do the women feel that their stories are represented accurately? How much was their input taken into account? To learn that they received a transcript of their interview and were given the opportunity to decide which quotes should be included in the installation was incredible. I am definitely impressed by the consideration given to the women and their opinions throughout the process. 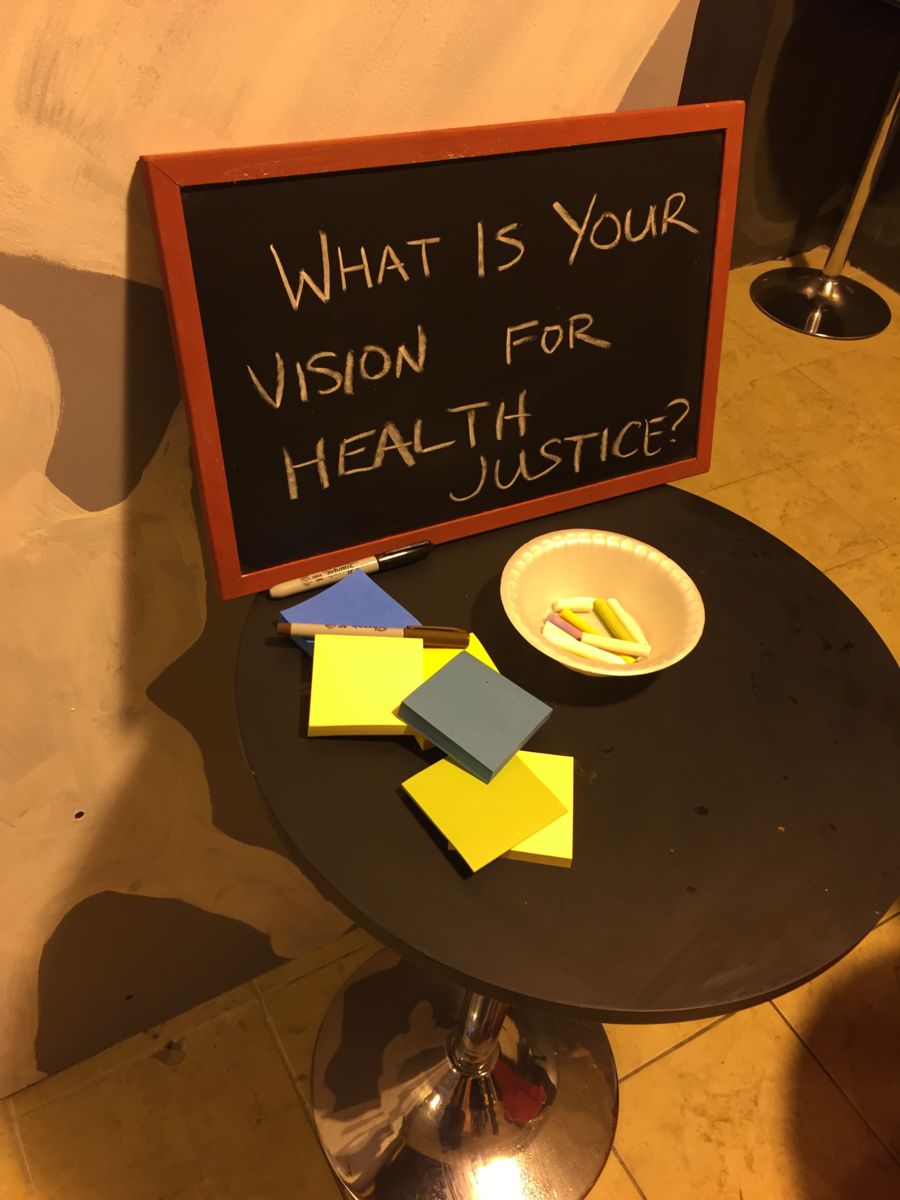 E: They really were involved in every step! The design was done by Wizinsky and some of his students, and we learned that he coordinated Skype and web conferences between the participants and the students during which the women were given the opportunity to provide feedback. It really makes the final product feel more sincere, knowing that the participants got to help shape the project into something that they felt represented their experience.

M: And it led to some really great ideas that may not have happened had the design been less collaborative ...

E: Like the orange cards! The installation included one panel that featured vast rows of orange ID cards, and we learned that every woman received one of these cards when they joined the WIHS program, which was a study started in 1993 to learn about the impact of HIV on women. The cards allowed them to access the WIHS building.

M: It was even cooler when we learned about the origination of that idea! At one of the meetings of the exhibition’s creators with the WIHS participants, one woman pulled out her orange card, and suddenly all of the other women were pulling their orange cards out, too! Even though they don't actually use the cards to access care anymore, they still keep them in their wallets and purses, which goes to show how important that detail is to their stories.

E: It was those little touches that really made the exhibit successful, that made the content stick in your mind as actual people's stories instead of a museum exhibit or a retrospective. While the exhibit is only at the Pop Up JUST Art Center until April 8, the creators are looking to install it in other places around Chicago; keep an eye on historymoves.org for upcoming information!

By Raven Feagins Hataria James is an outgoing, loving mother of 6 with a passion for giving back...
Read more...