Kushner in the Here and Now 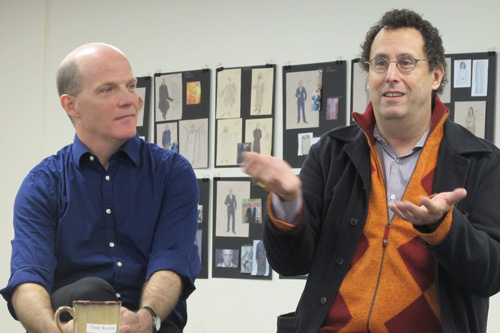 Legendary playwright Tony Kushner shuffled into the rehearsal room about 10 minutes before the first read-through of the Court Theatre’s spring production of Angels in America.

He shook a few hands and took his perch on a stool next to artistic director, Charlie Newell, who has directed two other Kusher plays — Caroline, or Change and Illusion — in his 20-year tenure at the Court, but never Angels, not until now.

The two men faced a table of attentive cast members, as well as a small audience of donors, patrons and self-proclaimed Kushner “groupies” in the back of the room.

“Why Angels in America now?” Newell said, asking his first question in an introductory conversation with Kushner.  (Angels changed the discourse on HIV/AIDS when it premiered some 20 years ago. Set in 1985, the characters struggle with AIDS during the Reagan administration. Much has changed since then, hence Newell’s question.)

“I don’t know, you’re the one who’s doing it,” Kushner said, breaking into a toothy grin.

The 50 or so people burst into laughter. Kushner had his audience.

The Court Theatre is partnering with the AIDS Foundation of Chicago (AFC) to stage Angels. Kushner will be the guest of honor at AFC's March 27 fundraising dinner, An Angel Among Us.

And both parts of the play, Millennium Approaches and Perestroika, open at the Court Theatre on April 14. Proceeds from the opener will benefit AFC.

Growing more serious, Kushner acknowledged his healthy past relationship with the Court, as well as the chance to benefit AFC, as motivations.

“The fact that the play has identified with late early days of the epidemic, it coincided with a turning point … if not a genuine shouldering of the responsibilities needed to address the epidemic — that connection has always meant a lot to me,” he said.

Angels, like the AIDS Memorial Quilt, provided a much-needed opportunity for a large public gathering of those who had been affected by HIV/AIDS, those who had lost loved ones.

“It’s a great pride to me the play was able to function as that,” Kushner said. 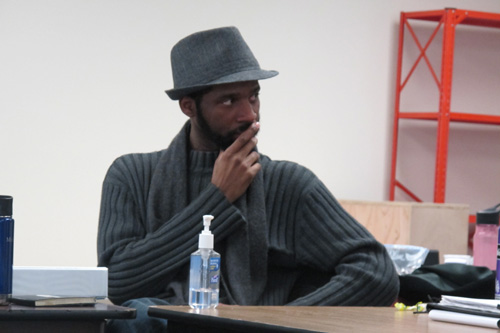 Actor Michael Pogue will play the part of Belize.

That being said, Kushner said he never intended to write a play about AIDS, raise public awareness about the epidemic or advocate for any particular group of people.

“I don’t think any play should have the job of teaching people to feel or think a certain way,” Kushner said, adding that goal could be more effectively achieved by writing an essay.

Funny, expressive, delightfully tangential, Kushner soon veered off into global warming and the unseasonably warm Chicago weather: “We have to hate this weather but it makes us happy. That’s the grim irony of the universe making us all enjoy our approaching extinction.”

One was reminded of the great Angels line: "Respect the delicate ecology of your delusions."

But, back to the question, why Angels now? 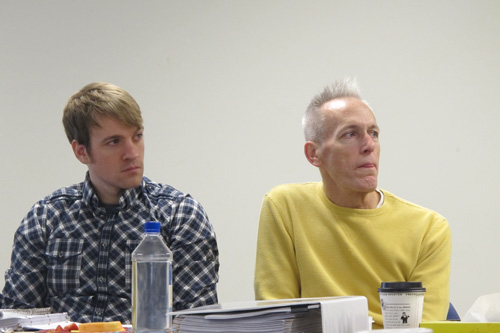 Much has changed in the last 20 years but much has not, Kushner said. The epidemic continues on as we continue to suffer from the lasting effects of Reagan politics, he said.

And he put it more simply. “A play gets redone when it’s time.”

Kushner likened an audience’s experience with a play to the relationship between a sleeper and a dream. It shifts and evolves constantly. No one point in time is necessarily better than another.

“Why not?” Kushner said, grinning.


Tickets to An Angel Among Us: A Evening with Pulitzer Prize-winning Playwright Tony Kushner, the AIDS Foundation of Chicago's 2012 dinner on March 27, start at $225. They can be purchased online or by calling Rhett Lindsay, AFC’s manager of fundraiser events, at (312) 334-0935.