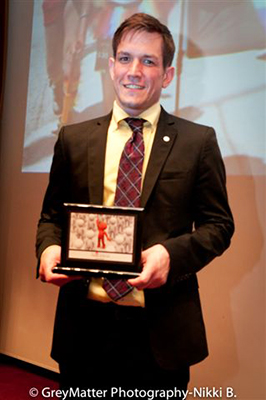 Jason Karel sits on the Junior Board for the AIDS Foundation of Chicago (AFC), but his leadership role with AFC doesn’t stop there. He’s a stalwart champion of the LGBTQ community, especially at work.

Jason recently received the Volunteer of the Year Award from his employer, BMO-Harris Bank. Though he works in human resources, he volunteers tirelessly with Lion’s Pride, the bank’s formal group of lesbian, gay, bisexual, transgender, and straight (LGBTS) employees, whose mission is to recognize BMO’s diversity and represent the markets they serve.

BMO presented Jason with the award on June 6 for playing an instrumental role in linking them with AFC last year.

“I was a visible presence, just not by volunteering but acting in a leadership role,” Jason said. “I was a super strider for the AIDS Run & Walk, recruiting a lot of people for the event and being a top fundraiser. I also spearheaded BMO’s volunteer program for AFC’s World of Chocolate.”

Lion’s Pride has 128 members, but Jason’s efforts set him apart to win the peer vote for the award.

“I’m honored to be recognized in this way,” Jason said. “I’m just excited that I work at a place that embraces diversity. Other places I’ve worked didn’t do that, so it’s important for me to be part of this group.”

Jason is also active in organizing BMO’s AIDS Run & Walk team for this year’s race, serving as a co-captain with Karen Trimuel and Stephanie Heather, also with Lion’s Pride.

Jason recruited Karen for the Run & Walk last year, but at first, she resisted his invitation. She eventually decided to participate, running in the memory of her brother, who died from complications with AIDS over 20 years ago.

Karen became a top fundraiser for the 2012 Run & Walk and has already started to recruit BMO employees to join her in this year’s race.

Both David Martin and Larry Passo, Chair and Co-Chair of BMO-Harris Lion’s Pride, respectively, are also strong supporters of AFC.

Jason received the top volunteer award because he met four criteria: 1) He embraces the spirit of diversity, 2) is involved with the LGBT community, 3) advocates for equality, and 4) shoulders a leadership role.

The 2013 AIDS Run & Walk Chicago will take place at Soldier Field on September 28. Registration is now open, and you can follow the Run & Walk on Facebook and Twitter for updates about the event and its performers.

“I’m happy to give back to AFC,” Jason said. “I believe in educating people about LGBTQ issues. I didn’t have that growing up, but it’s important. I believe in helping the LGBTQ cause because it’s a modern-day Civil Rights Movement. If it weren’t for groups like AFC, I’m not sure where we’d be as a community.”