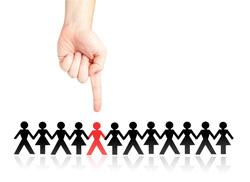 A recent arrest under an antiquated Illinois HIV criminalization law challenges how media handle sensitive information when stigma and livelihood are at stake.

The facts of this case are limited:

The individual who filed the complaint was “a 24-year-old man,” according to a press release from the Cook County Sheriff’s Office.

The alleged aggressor, a 38-year-old Cicero police officer, was charged with criminal transmission of HIV.

"We are concerned about the publicity and stigma generated by media for these men and for others living with HIV," said David Ernesto Munar, president and CEO of the AIDS Foundation of Chicago (AFC).

AFC is dismayed that the Cook County Sheriff’s Office, as well as articles from various news outlets, would publicize the name, hometown, and picture of the man being charged. Such negligence could foment greater HIV stigma and discrimination for the officer from Cicero.

“Since the known facts are limited and the case has yet to go to court, it’s important to handle the information we know carefully,” Munar said. “We don’t want the man being charged to be tried in a court of public opinion, which could have personal and professional implications for him.”

Without knowing the specifics of this suit, it is still worth exploring the overarching impact of Illinois’ HIV criminalization laws.

“These kinds of cases highlight the need to repeal such laws,” said Ramon Gardenhire, AFC’s director of government relations. “Cases that center on ambiguity often put the person being accused in a position to explain what happened between two consenting adults.”

HIV criminalization laws originated in the early years of the epidemic, when public health authorities didn’t know how HIV was transmitted. Lawmakers then attempted to pacify fears and misperceptions by passing legislation that would theoretically deter the spread of the virus.

The dilemma now is that these laws perpetuate the stigma of HIV/AIDS, according to Gardenhire. They also encourage some individuals to avoid testing. If people at risk of contracting the virus don’t know their HIV status, then they can’t be charged with criminally transmitting the disease.

But that doesn’t address the problem.

Since HIV/AIDS carries a heavy stigma, it’s important to think critically about existing criminalization laws and to act responsibly about identifying people who are charged under these laws.

“Everybody can play a role in destigmatizing HIV,” Munar said. “From lawmakers to journalists to the general public, we have a responsibility to choose our words carefully and not jeopardize an individual’s livelihood for the sake of a headline.”