In an effort to alleviate Illinois’ financial crisis, the state this summer made deep cuts in Medicaid funding, imposed new restrictions on Medicaid eligibility, programs and services, and enacted a slew of cuts to community-based service providers and human service programs.

These measures have a disproportionate affect on communities of color, and last week, more than 200 people gathered to join in a conversation about what these changes mean for the community at large, and minority populations specifically.

“We are gravely concerned about these cuts, said Ramon Gardenhire (at right), director of government relations for the AIDS Foundation of Chicago (AFC). “We know they will unquestionably harm people with HIV, working families, people with disabilities, and seniors.”

Overall, Medicaid is the largest health care funding source for people with a limited income in Illinois, and covers low-income people, and those with specific disabilities, such as HIV/AIDS.  For decades, researchers have documented that African-American and Latino people bear a disproportionate burden of chronic diseases, such as HIV. In Illinois, more than 70 percent of new HIV infections are among black and Latino individuals.

As such, the Medicaid cuts are expected to disproportionately affect the black and Latino community.  Blacks and Latinos represent over half of the nearly 2 million Medicaid enrollees in Illinois. One in five Illinois residents rely on the Medicaid program.

AFC was one of 30 partner organizations that coordinated a town hall meeting to discuss the size, scale and impact of these cuts. The implications of the funding loss to medical and social service programs will reach far and wide. For example, a limit of four prescription drugs per month was placed on people covered by Medicaid. While HIV medications were granted an exemption, people with concurring illnesses will face bureaucratic delays that could force them go without life-saving care. Dozens of other changes will likely decrease the quality of life for those who rely on these services, Gardenhire said.

Eligibility cuts include the elimination of IL Cares Rx, which helps several thousand people living with HIV afford the cost of HIV medications obtained through Medicare Part D. These cuts will force thousands of Illinois Cares Rx clients with HIV back on the rolls of the AIDS Drug Assistance Program (ADAP), which earlier this year had to adopt cost-saving measures to remain solvent, Gardenhire said.

“Forums like the town hall are essential to help educate, mobilize and engage communities around these critical issues,” Gardenhire said.

AFC President/CEO David Ernesto Munar welcomed panelists and audience members to the town hall. The meeting then continued with comments delivered by panelists with first-hand knowledge of these issues, representing the health care system, clergy, the legislature, service providers and individuals affected by these harsh cuts. 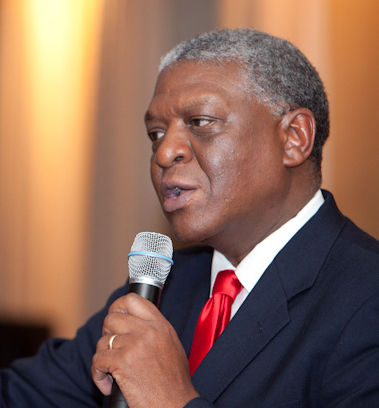 Community members had the opportunity to ask questions and discuss topics with the panelists before William McNary (at right) of Citizen Action/Illinois gave rousing closing remarks. While advocating for a solution that strikes at the root of Illinois fiscal crisis – replacing a constitutionally-mandated flat tax structure that favors the wealthy with a progressive tax – he reminded the crowd that only a broad-based community effort will improve the quality of life for all Illinoisans.

“What affects one of us, affects all of us,” McNary said. “We are all a part of the same community and we all pay a price when there is injustice in that community. … Let us use all of the resources at our command to rebuild, restore and reestablish America as a great nation.  … And let us start here in Illinois by reforming our tax system.”

Restructuring the tax system would go a long way to improve economic justice in Illinois, said John Peller (at left), AFC vice president of policy. The budget cuts causing these disparities were not inevitable. AFC has signed on to a graduated income tax campaign in Illinois, which seeks to amend the constitution to allow for a tax system that spreads the tax burden more equitably.

“The state could have closed corporate tax loopholes that would have rendered these cuts unnecessary,” Peller said.

Munar agreed that a key component of real change in Illinois would be getting the message out that a strong, functioning health safety net for the poor is important for the rest of the population.

McNary harkened back to Dr. Martin Luther King and the movement he led. He reminded the audience that while great leaders are necessary, history is rarely made by heroes alone, but by the work of ordinary citizens.

“You all have to do the hard, unglamorous, day-to-day work of learning the facts, educating your neighbors, identifying who is on your side, getting those people to come out and vote,” McNary said. “Let’s go all in!  I need y’all to have the courage to stand on the front side of history and help to change it.”

To move forward, Munar said it is necessary to mobilize a coalition of people to advocate for the reversal of these cuts, as well as mechanisms to raise sufficient revenue to address the health and social service needs of Illinoisans.

McNary closed out the meeting by reminding the crowd that America and its people excel when each and every person is given the opportunity for health and happiness. Despite the current setbacks, better times lie ahead.

“I know times are tough, but we’re tough,” McNary said. “We’ve been through tough times before.  Let us climb up from our valley of despair, go up the rough side of the mountain of hope, look over, and see an America that works for all of us.”