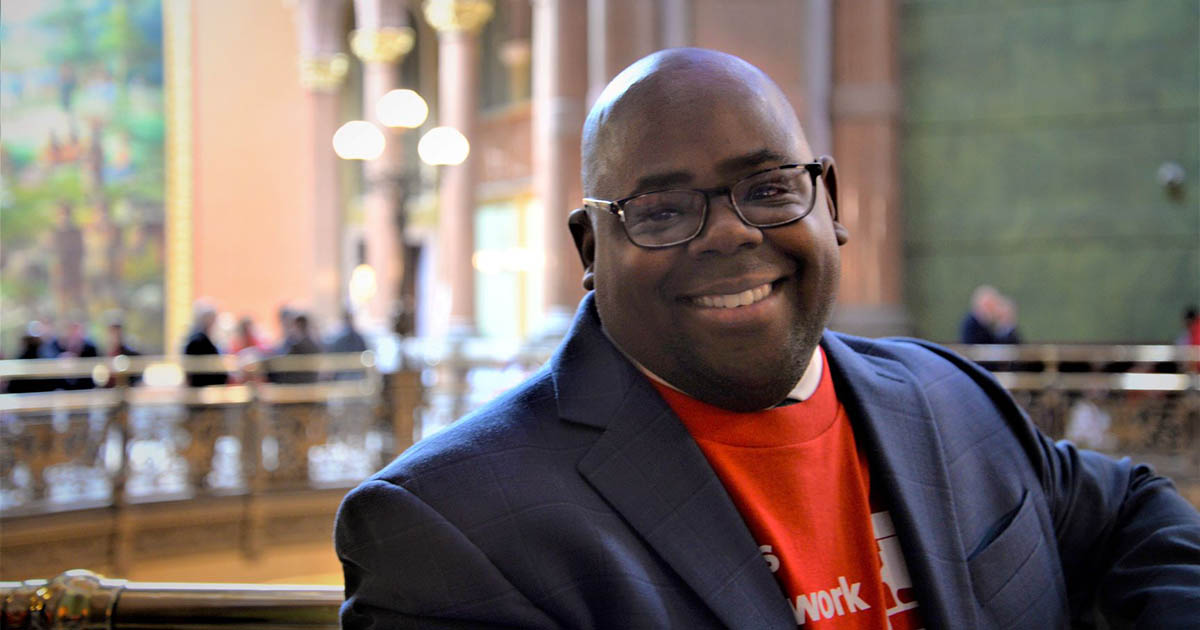 Tim Jackson vividly remembers the first political campaign he worked on at age 12 in Jackson, Mississippi.

Tim was at home with his mother when they both heard a knock on their door. His mother went to answer it, and Tim observed nearby, listening to the conversation taking place. Their alderman was running for re-election and wanted their vote. Hearing this, Tim approached his mom and asked if he could speak to his representative.

"I'll never forget it," Tim said. "I said, ‘Mr. Calhoun, there have been three potholes on our street for the past two and a half years. I have written to you and those potholes haven't been fixed. Why should I vote for you?’"

Tim was very interested in politics at that age, so much so that he used to run home after school to watch the City Council meetings on television. Unlike some his age, he understood how his local government worked and was willing to contact his councilman  to advocate for the needs of his community.

The councilman agreed with Tim, left their house and had the potholes fixed. The councilman later called Tim and asked him to join his campaign for re-election. Tim readily agreed and went door to door, canvassing for the councilman.

Today, Tim is the Director of Government Relations at AIDS Foundation Chicago (AFC). He works directly with elected Illinois officials to advance legislation that supports people living with or vulnerable to HIV and other chronic conditions to thrive and live healthier lives. When the Illinois General Assembly is in session, Tim journeys down to Springfield to attend relevant committee meetings and speak directly with key lawmakers. Tim also supports various coalitions, especially amid the current public health crisis to make sure vulnerable populations have adequate resources such as free treatment for the new coronavirus (COVID-19).

“I am so excited to be here,” Tim said. “I have always had an interest in AFC.”

Tim brings a breadth of political experience to AFC that started in the Deep South, the national epicenter of the HIV epidemic. Born and raised in Jackson, Mississippi, Tim spent most of his life in the state. He attended Mississippi State University where he majored in political science and history. During college, Tim worked on several local campaigns and congressional races across the Southeast.

After college, Tim moved back to Jackson and took on a few non-political jobs to pay his student loans and other bills. He continued to work on political campaigns and provide political consulting on the side. As Tim worked to figure out what kind of political job he wanted to do full-time, he experienced a few hardships in his personal life.

During those post-college years, Tim’s aunt died from AIDS-related complications. In their last conversation together, Tim’s aunt made him promise to spend the rest of his life advocating for people living with HIV. She didn’t offer guidance on how to do that, so Tim just sat with those instructions for a few years.

Three years after his aunt’s death, Tim was also diagnosed with HIV, prompting a desire for a fresh start. Tim decided to move and take a job as a campaign field representative  in Huntsville, Alabama. In this role, Tim built grassroots operations for a Congressional campaign and five state legislature races that integrated the efforts of volunteers, coalitions, and community activists to ensure election day victories.

Looking for more fulfillment, Tim also joined the Board of Directors for health care provider Thrive Alabama, formerly known as the AIDS Action Coalition. For the first time in his life, Tim’s political advocacy centered LGBTQ+ communities and people living with HIV, just as his aunt had asked.

“Prior to that time, my diagnosis as a person living with HIV was very private, but working for an AIDS service organization, it’s not so much private anymore, intentionally,” Tim said. “That’s where I found my voice.”

Tim began publicly sharing his story as a person living with HIV “to smash stigma in its face.” He also worked to equip other people living with HIV with the ability to share their own stories. Eventually, Tim became Board President and helped Thrive Alabama grow from a small AIDS service organization to a fully funded, federally qualified health center with four clinics.

During his volunteer service at Thrive Alabama, Tim also worked as a full-time staffer for Rep. Mo Brooks (R-AL). Though Brooks is a very conservative member, Tim was able to convince him to join the Congressional HIV/AIDS Caucus. Brooks is the only member from the state of Alabama and one of only five Republicans on that caucus.

In addition, Tim persuaded Brooks to ask the Centers for Disease Control and Prevention (CDC) to change how its HIV prevention funding was distributed to reflect diagnosis rates rather than population size. In Alabama, most new HIV diagnoses happen outside of its largest populated metropolitan area, which means adequate resources were not reaching the people who needed it the most. Although the effort was unsuccessful and Brooks received flack for it, the congressman led that attempt with Tim’s help.

After spending several years balancing HIV advocacy work and his full-time congressional job, Tim desired another change. He wanted a position where he could advocate for people living with HIV full-time, so when a position at AFC opened, he applied.

Although Tim had spent little time in Illinois prior to joining AFC, fighting the HIV epidemic in the South taught him several relevant lessons. First, regardless of whether you’re in Illinois or in the South, there still aren’t enough resources to adequately support people living with or vulnerable to HIV.

“If I have nowhere to lay my head at the end of the evening, I’m not worried about taking a pill,” Tim said. “Housing is health care. That doesn’t matter whether you’re here in Chicago or in the Deep South.”

Another relevant lesson Tim learned is that HIV disproportionately impacts certain communities, namely young Black and Latinx gay and bisexual men, cisgender Black women and transgender women of color. Because these populations are the most impacted by HIV, AFC prioritizes them in its work.

“It is a bit nerve-racking to be in a new job where your job is to work with legislators in the General Assembly when session has already started,” Tim said. “You’re learning a completely different, new landscape and new players, but I couldn’t be happier.”

Categorized under AFC news, Illinois and Inside Story.