On Faith and HIV 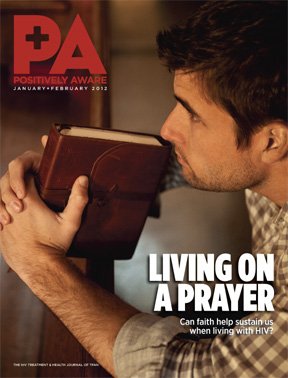 "It’s hard for many people to separate the concepts of faith and religion — for some the two go hand in hand. Unfortunately, these days I think many people have been disillusioned with the standard dogma and tenets of modern religion," wrote Jeff Berry, longtime editor of Positively Aware magazine in the Jan./Feb. issue.

"... And there is the fire-and-brimstone mentality of those who take the gospel word for word, and use it against those whose lifestyles or sexual orientation they either don’t agree with or can’t even attempt to understand. It’s no wonder that people have lost faith. But faith is much more than brick and mortar or words on the page of a book."

In his beautiful and moving editor's note, Berry describes his own spiritual journey, growing up with a Methodist minister for a grandfather before eventually turning away from the church. But his own life-changing experience of testing positive 22 years ago, and his mother's valiant but fatal battle with breast cancer, fortified his faith in a higher power.

"I stopped attending church years ago, but my faith in a higher power remained firm — it’s something that I believe lies within me, and within all of us," Berry wrote. "I have also come to believe that, regardless of the circumstances in our lives, we are always presented with a choice in how we perceive what is happening in the world around us. And that choice gives us the power, and the strength, to create change, or at least a change in perception."

The timing of Berry's words lend them even more impact. Just yesterday, Pope Benedict proclaimed gay marriage a threat "to the future of humanity itself." And of course, Cardinal Francis George, head of the Chicago Archdiocese, recently came under fire for comments comparing the Chicago gay pride parade to the Ku Klux Klan. George has since apologized for those comments, which were aired on Christmas Day.

Of course, the Catholic church is not unique here. Many churches have long histories of ostracizing people affected by HIV through homophobia and opposition to gay marriage. It's an issue that the AIDS Foundation of Chicago is addressing through its Faith Responds to AIDS initiative, led by the Revs. Doris Green and Charles Straight, an interfaith coalition attempting to stop the HIV epidemic in the African-American community.

Also in Jan./Feb. issue of Positively Aware, reporter Enid Vazquez talks to African-American clergy trying to change homophobic views among their colleagues in the story, "Of Faith and Compassion."  And in Sue Saltmarsh's story, "The Hidden People," three gay Muslims fighting HIV stigma are profiled.

The Rev. Edwin Sanders III, as quoted in Vazquez's story, perhaps says it best: "We need to appreciate that sexuality is a gift from God, that needs to be celebrated and needs to be respected and understood that it's good."