On Media and HIV/AIDS 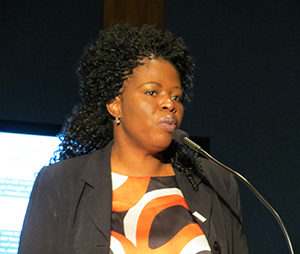 Florence Ngobeni-Allen lost her 5-month-old daughter to AIDS some 15 years ago, before she had access to antiretroviral drugs.

For the HIV-positive South African, it was the most difficult moment of her life.

Fast-forward to present day, thanks to appropriate treatment and services, Ngobeni-Allen (at right) has two HIV-negative children:  Alex, who turns 6 years old next week, and a baby, Kulani. And she works as an advocate for the Elizabeth Glaser Pediatric AIDS Foundation.

“I am proof that if women are given the resources they need, they can live healthy lives,” Ngobeni-Allen said to the 80 or so attendees of the media training held in advance of the International AIDS Conference (AIDS 2012).

Ngobeni-Allen’s story was an example of the type of story that journalists were urged to seek out at AIDS 2012 – captivating human stories that illuminate complex issues. The media training, facilitated by AIDS 2012 in the Voices of America building near Capitol Hill, attracted a mix of journalists and nonprofit workers from all over the world. The purpose of the training was to highlight key issues and to ease the transition into what can be an overwhelming experience for reporters new to the subject.

AIDS 2012, the first International AIDS Conference on American soil in 22 years, is expected to draw as many as 25,000 people and, among them, up to 2,000 journalists from all over the world.

“We’re back (in the United States) in an incredibly historic time,” said Michael Kessler, international media coordinator for AIDS 2012. “We have the scientific tools to at least start talking about ending the epidemic, but how are we going to start implementing them?”

Both the scientific breakthroughs – including male circumcision as HIV prevention among heterosexuals, antiretroviral treatment as prevention, and pre-exposure prophylaxis – and the financial constraints figure to be the conference’s primary themes, Kessler said. 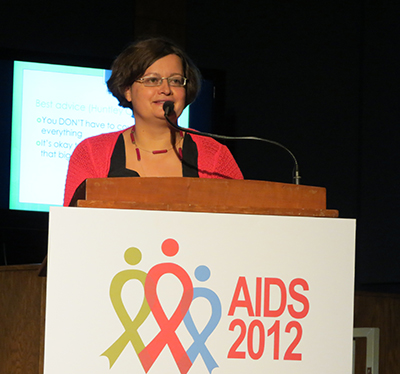 The conference will be a swarm of activity overflowing with stories, said Mia Malan (at left), a longtime AIDS reporter for the Mail & Guardian, a South African weekly newspaper. Her advice was relatively simple: Don’t try to cover everything. Write to what you know. Don’t be boring.

“I don’t believe a boring AIDS story should be in the newspaper,” Malan said. “It really is possible for an interesting HIV story.”

Regan Hofmann, editor of POZ Magazine, urged the journalists on hand to “report the news as it is but also realize you have a responsibility to bend and shape minds.”

Asked about the line between journalism and advocacy, Hofmann replied: “All journalism is advocacy.”

Hoffman went on to explain that all journalists act as advocates, their positions illustrated by who they interview and how they frame the story. She went on to say while POZ is an advocacy publication, it strives to be evenhanded in its reporting to reflect the diversity of those affected by the epidemic.

It's a fine line between journalism and advocacy, said Marcel Pacatte, a professor of journalism at Northwestern University’s Medill School of Journalism. It should always be the facts, the truth of the story, that effect change – not the reporter’s personal leanings, he said.

Perhaps the best HIV/AIDS stories are those that are not black and white, stories like Ngobeni-Allen’s, whose story depicts both an example of hope and the challenge that lies ahead.

Stigma and discrimination are still rampant in her community, she said. While she uses her personal story to advocate against mother-to-child HIV transmission around the world, her HIV-positive status is more tenuous at home.

“I still don’t know how I’m going to disclose my HIV status to my children,” Ngobeni-Allen said.