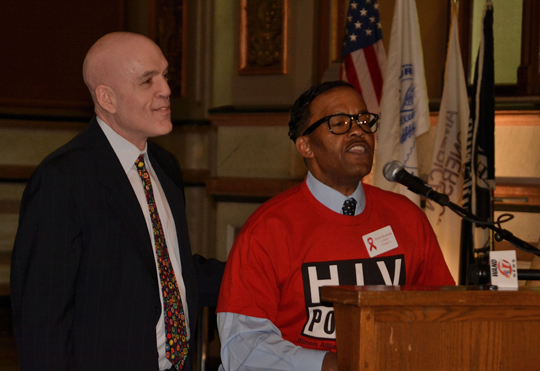 A federal lawsuit filed Monday by a Chicago man who claims he was denied HIV medication while in jail has shed light on an issue usually hidden in the shadows: health care for people who are both living with HIV and incarcerated in prisons or jails.

Arick Buckles, 39, reported that he was denied necessary medication while being detained for seven days in the fall of 2010 in the Bureau County Jail in Princeton, Ill., awaiting trial for the non-violent crime of writing bad checks. Buckles said he disclosed his HIV status and need for medication to staff – including a nurse – during his intake process. Despite this and repeated attempts to communicate the necessity that he receive medical care, Buckles was unable to access his medication for his entire 7-day incarceration.

Because of this experience, Buckles, represented by lawyers of the American Civil Liberties Union of Illinois, has filed a lawsuit.

“It’s important for me to bring attention to this,” Buckles said. “No one else should have to endure such harsh treatment. I want to encourage other individuals, who may at some point become involved with the corrections setting, I want to encourage them to advocate for their needs. We know that this is not an isolated problem. It happens quite frequently. People are afraid to come forward, due to the shame and stigma surrounding HIV and AIDS.”

Buckles has since turned his life around as an HIV outreach worker with the Chicago House and an advocate for the Illinois Alliance for Sound AIDS Policy (IL ASAP), becoming one of the most impassioned voices for HIV justice in the state. He is not asking for damages in the lawsuit. Rather, he hopes to highlight the issue of HIV health care in correctional settings and empower people living with HIV and AIDS to become self-advocates.

John Peller (at right), vice president of policy at the AIDS Foundation of Chicago (AFC), said it is not uncommon for technical glitches to arise when people living with HIV are admitted to corrections facilities, but Buckles’ case is extreme.

“We’ve heard about other cases, other incidents, where people with HIV have not gotten medications for 24 hours because of a procedural problem, where a doctor has to be contacted to write a prescription, for example,” Peller said. “But to go as long as Arick was forced to go without medication, that really stands out as unusual. It’s a case that stands out in its inhumanity.”

A Breakdown in Care

Rev. Doris Green is the director of correctional health and community relations for AFC. She has worked with prison populations for more than 30 years. She does not have a working relationship with the Bureau County Jail, but after years of work with the Cook County Jail, she said Buckles’ experience raises many questions for her.

“[Buckles] should have been referred to a health care specialist,” Green said. To leave him without medication was “not right. He openly disclosed his status, he made it known.  What I want to know is why wasn’t he referred to a doctor? Who did not refer him? Why was that not done? Why was a person who disclosed this information not referred to a medical provider? Why was he not given an appointment? Why was there no follow up?”

As a person who has worked to build communication and relationships between the HIV advocacy community and the Department of Corrections, Green said Buckles suffered because of “a breakdown” in coordination and communication.

Though he was only without medication for seven days, Buckles said the physical side effects, including dizziness, vomiting and diarrhea, were coupled with severe anxiety about the discontinuity of his medical care. He was unsure how the disruption in medication would affect his viral load and possible transmission of the disease to his partner.

“I told them [about my HIV status and need for medication], my partner told them, my reverend told them and other advocates were calling on my behalf,” Buckles said. “They were aware. I never got medication, never saw a physician. [A physician] did come on the grounds, but he did not see me.”

In recent years, Buckles has been able to overcome HIV stigma and speak up in part because of the education and support he received from AFC and IL ASAP, the latter of which he is currently co-chair.

“It’s due to individuals that are in my life who assisted me to advocate for myself,” he said. “At IL ASAP, a group of advocates here in Illinois, this is pretty much what we were taught. AFC actually taught us to advocate for our needs, and I just couldn’t be silent about it.”

Peller noted that the only reason the public is learning about Buckles’ case is that he had the support and the tools to speak out.

“Arick has a family that knows his HIV status and how to be good advocates for him,” Peller said. “There are organizations he’s connected to where people care about him.”

Other people with HIV are often not as fortunate.

“We don’t know who else this is happening to because many people don’t know who to tell or where to go,” Peller said. “We hope this lawsuit will bring greater awareness for people in prison to access the care they need.”

As Buckles’ situation illustrates, the issue of health care for the incarcerated reaches beyond the walls of prisons and jails. “Prison health is public health,” he said. “People who are in prison now are going to return to the community.”

Green (at left) agrees with the importance of providing medical care to people in prison and jail, and noted that those institutions are obligated to fill that role.

“As a person in prison, you have rights,” Green said. “[Buckles] was trying to save his life. People in prison are human beings, and if they have medical needs, the state and county must fulfill them.”