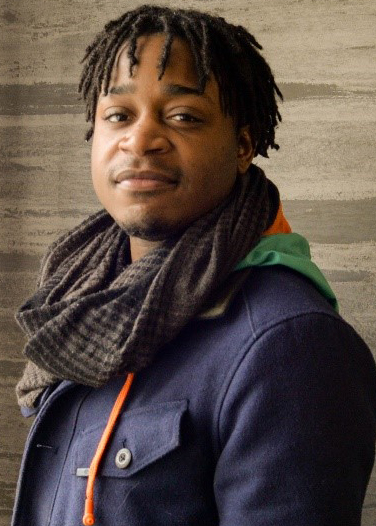 Pharoh Swain is a soft-spoken, yet passionate young person from Chicago's West Side. I met with this 22-year-old for the first time in the lobby of Center on Halsted, where he formerly worked as an intern during the summer. Now, Swain currently serves as president of the new All Chicago Youth Advisory Council, which seeks to guide organizations to better understand the realities of youth experiencing homelessness from the perspectives of some of those young people. Each member's journey is unique, and Swain's is no exception.

Both of Swain's parents passed away before he was old enough to speak, so he was raised by his grandparents. He grew up in Chicago’s Humboldt Park neighborhood and recalls how adamant they were about the importance and necessity of education.

"When I was in school, I was in school. Nothing stopped that," says Swain. "My grandparents raised me on a very strict 'scholastic diet.' Even in summer … I was in books. Education was a very big thing for my family."

Swain's grandparents were always a supportive force in his life, but when Swain was 15, tragedy struck when his grandfather passed away. With hardly enough time to grieve, Swain also lost his grandmother two years later. Since he was only 17 at the time, Swain needed a guardian and place to stay as he finished out his last year of high school. His next closest adult relative was his uncle, so he moved in with him for a year. Swain described the relationship with his uncle as abusive, and he knew that he needed a way out. His mindset was still very much focused on education, which allowed him to stay committed to his schoolwork and distracted from life at home.

This intense motivation to leave paid off for Swain and propelled him to success. He graduated from high school with both his diploma and an associate degree in graphic design and technology. The next logical step was to attend a 4-year school and move out of his uncle's house; Swain did just that.

"I wanted to get to the dorms as fast as possible. I went to DeVry University because it was an easy segue. I went to study multimedia design and technology. Even though I knew I didn't want to do that [for a living] ... I needed to get out of my uncle's house."

He was able to stay in their dorms for almost a year, until school fees and other finances caught up to him. With no support system in place, Swain was no longer able to focus on school, let alone afford it. He lost all of the money left to him by his grandparents, was forced to drop out of school and frantically searched for a new place to call home.

Throughout the next year, Swain jumped from shelter to shelter in search of stability and peace of mind. He stayed at a shelter in the Humboldt Park neighborhood for two months, left for a shelter in West Town for about five months, and was eventually referred to Mercy Home, where he was able to stay for two years. Hopping from place to place was an incredibly stressful point in Swain's young life. Additionally, all of his focus was consumed by ensuring he had access to basic needs, which meant that his drive for academics had to be pushed to the side.

Thankfully, Swain was able to find some sense of stability during his stay at Mercy Home. He was able to live there for the longest amount of time, and it was where he met his therapist. Now a beloved mentor, Swain's therapist told him that he possessed the skills that make a great social worker. Swain always loved helping others, and this was the motivation he needed to reignite his drive. After staying at Mercy Home for some time, he began searching for internships and work in the realm of social services, and also made frequent visits to the Center on Halsted to access their services for LGBTQ youth. Swain ended up making a lasting impression on staff, and was encouraged to apply for an internship that they were hosting. Swain landed the position.

"I have to give Center on Halsted credit for giving me the opportunity to spark my interest in everything. [During my time], I worked with RADAR, which was a research study sponsored by Northwestern. It was a study of men who have sex with men (MSM) and how social maps might impact their chances of getting HIV."

Swain was able to get back in touch with his academic roots for the summer through this engagement with research studies, while also networking with peers who saw his potential and love for the work. A colleague recommended Swain for the Youth Advisory Council at All Chicago, and he found himself embracing social work as his calling.

"With those experiences combined, I really started to understand that I like the interactivity of it. I liked giving people resources. I liked helping people. When I got the opportunity to join the Youth Advisory Council, I felt like I could take all of the experiences I have and push that forward."

As Swain describes it, the general mission of the council is to help All Chicago and different organizations that ask for a youth perspective. Council members help inform major organizational initiatives, such as grant-writing and the creation of new programming, to ensure that young people are taken into account. Currently, the Youth Advisory Council is working to specifically address struggles faced by LGBTQ youth experiencing homelessness, and individual members will be participating in the Out in the Open Sleep In to raise money for organizations that work specifically with these populations.

While Swain makes it clear that he is grateful for having access to spaces that allowed him to have a place to lay his head at night and help foster his development, he is also openly critical of his time spent at each one. He recalls a lack of opportunity for input by clients – such as ensuring that funds are allocated to resources that clients realistically need – which is why he is so passionate about the work he does today.

Swain now lives comfortably in the West Garfield Park neighborhood and continues his work to empower youth who seek access to social services. In doing this, he always keeps this simple message in mind: "The ultimate goal is to end homelessness … for everybody."