For many women affected by HIV, it’s easy to feel alone and unsupported. There isn’t always a community welcoming you with open arms — or at least it can feel that way sometimes. 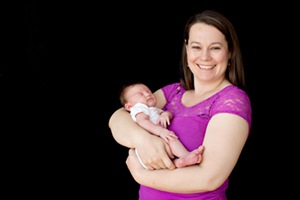 Poppy Morgan took matters into her own hands and created her own community. Poppy, 40, is a leader in the nonprofit sector in the western suburbs of Chicago (due to stigma surrounding HIV, she prefers to remain vague about the details of her biography and use a pseudonym). Her husband of almost 14 years, who works in the health care industry in the field of cardiology, lives with HIV, and although Poppy is HIV-negative, she still feels the stigma of being affected by HIV.

She learned of his HIV status before they were in a romantic relationship. “We were friends and coworkers first, and during the course of our friendship, he revealed his status to me.” She says. “He was the first person I had ever met who had HIV, and I remember feeling so proud of him for disclosing and feeling comfortable doing so.”

When she and her husband decided to try for a baby and Poppy was looking for options, she found very few resources. When they were still dating, in 2000, Poppy spoke to her husband’s doctor about options for having a biological child. The idea that an HIV affected couple could have a biological child was not yet medically supported. What’s more, when she tried to get more information, she was shut down: “I had a situation early on where I had a doctor that refused to prescribe PrEP for me, and she refused to see me as a patient,” Poppy says. “She basically told me, ‘If I hear you’re trying to have unprotected sex with your husband, I’m not going to treat you as a patient because that’s unethical.’”

Unable to find support even within the medical community, Poppy created a blog, HIV Negative Spouses, which documents her journey towards having a baby, and also served as a kind of support group. “I found I needed more support around the issue,” she says, “There were support groups for people with HIV, and support groups for people dealing with fertility issues, but none for a person who was HIV-negative but related to someone living with HIV.” After finding a new doctor, Poppy became one of the first people in the nation to be prescribed PrEP to help her conceive, and she and her husband were able to have Macey, a healthy, HIV-negative baby girl, in 2013. “Once PrEP came along, our prayers were answered, and we couldn’t believe that after 13 years of searching for a viable option, it was as simple as me taking a pill,” she says. “It just took all those years for the science to make it possible.”

However, even after she gave birth, people still had opinions. “I’ve had people on my blog almost daily comment that I’m irresponsible and I’m selfish, and ask me how I could imagine bringing a child into such a ‘messed-up’ life.” She says. After she realized that she couldn’t count on others’ approval of her decisions, she decided to become her own advocate, and encourages other women to do the same. “What I would say to these women or girls is to find support, and then really learn about self-care. Educate yourself, talk about it, research your status, find out what medications are best, and stick up for what is right for yourself, because you can’t count on other people to do that for you.”

This can be especially hard for women because they can endure several layers of stigma: being a woman who talks openly about sex or fertility issues can be frowned upon, as well as being a woman talking openly about HIV. “What I’ve discovered on this journey is that, for women who are affected by HIV, it’s a different ballgame than men affected by HIV. Women always feel like they need permission: whether it’s birth control, how they’re having sex, or who they’re having sex with, there’s this added layer of needing to ask for permission. We need to be aware of that if we’re engaging in discussions about it.“

These days, Poppy and her husband and daughter live in the Chicago area and would recommend AFC to people looking for resources. “When we first moved here, we came into AFC to get my husband access to his HIV meds, and I came with him. They told me about some PrEP clinics in the area, and he is receiving amazing care. AFC really helped him get the paperwork started and guided him on the path towards having uninterrupted health care.”

Click here for more information on services the AIDS Foundation of Chicago can connect you with. Poppy continues to share resources and document her journey and ongoing fertility developments at her blog, HIV Negative Spouses.

By Bailey Williams   It happens once a year: The pesky little reminder goes off in...
Read more...