Rectal! Rectal! Read all about it! 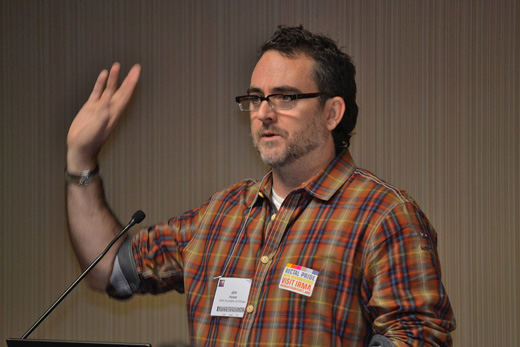 The word elicits a certain reaction from people.

“People say the word ‘rectal’ and they -- ,” said Jim Pickett, going into a simulated full body shudder of disgust.

Pickett, chair of the International Rectal Microbicide Advocates (affectionately dubbed IRMA), would know. He’s an outspoken advocate for more research and funding in the relatively new field searching for an effective rectal microbicide, an antiretroviral gel that could be a valuable tool in saving lives by preventing HIV/AIDS.

Along with his co-panelists, Pickett was at the United States Conference on AIDS on Friday afternoon to talk about microbicides and other promising new prevention tools, such as pre-exposure prophylaxis (PrEP) and female condoms.

“If condoms work, why do even need this?” Pickett, director of prevention policy and gay men’s health for the AIDS Foundation of Chicago, asked the group of 30 or so people gathered for the discussion.

Mumbled answers from various people essentially spoke the same truth: Often, people do not use condoms because they’re uncomfortable, and because they can inhibit pleasure and intimacy.

A vaginal microbicide is much closer to being a reality than the rectal variety, mostly because research into the latter has been slowed by years of stigma and political heel-dragging, Pickett said in a separate conversation. Whereas a vaginal microbicide is perhaps a few years away, it could be another 10 years before a rectal product is fully vetted and ready for use.

And this biological fact speaks to the need for a rectal-specific microbicide: The rectal wall is only one cell layer of protection from viruses, as opposed to the vaginal wall, which is 20-40 cell layers thick.

But perhaps the most controversial new prevention method is PrEP.

Recent trials have proven PrEP to be effective among gay/bi men who adhere to a regimen of Truvada, the drug made by Gilead Sciences, Inc. The results have been more mixed in trials involving heterosexuals.

Many national HIV/AIDS leaders, including AFC President/CEO David Ernesto Munar, have urged the FDA to move forward with a review of Truvada for PrEP for gay/bi men, while continuing to study the drug’s effect on heterosexuals.

And others, as outlined in a recent New York Times article, in the HIV/AIDS community have expressed concerns over cost, accessibility and adherence.

On Friday at USCA, Keith Green, AFC’s director of federal affairs, presented a recent Chicago study called “Project PrEPare,” in which 68 men who have sex with men, ages 18-22, were to be given Truvada, a placebo or nothing for an eight-month period – beginning in November 2009. There was also support counseling to supplement the prevention medication.

During that time period, the efficacy of Truvada was actually proven in another study, known as iPrex, and the so-called “blinders” were taken off of the Project PrEPare participants. In other words, they were allowed to know if they had been taking a placebo and were then offered Truvada for the duration of the study, if they wanted it.

Not one of the 68 young men became infected with HIV/AIDS during the project, Green said.

“My question is who’s going to have access to PrEP if it’s approved? It’s expensive,” said Erise Williams, Jr., who works for Williams and Associates, Inc., a health services nonprofit in St. Louis, Mo.

It’s a question that comes up often regarding PrEP.

Green acknowledged that he, too, has struggled with it.

“At the end of the day, though, science moves advocacy,” said Green, who is also co-chair of the Chicago Black Gay Men’s Caucus. “If we know it works, it’s unethical to not try to move it forward.”