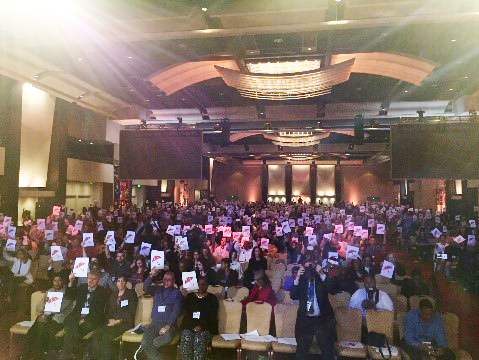 The sea of red umbrellas, the symbol of sex worker solidarity, could be seen from the stage of the National HIV Prevention Conference (NHPC)’s opening plenary featuring Douglas Brooks, Director of the Office of National AIDS Policy for the White House. The umbrellas were part of a protest organized by AFC Community Organizer Maxx Boykin and HIV Prevention Justice Alliance (HIV PJA) Associate Director Suraj Madoori, and supported by sex worker advocacy partner organizations. This protest was designed to bring attention to the omission of sex workers in the newly released National HIV/AIDS Strategy Updated to 2020 (NHAS). The protest also underlined NHAS’ failure to meaningfully involve networks of people living with HIV (PLHIV) in the development of the strategy.

The protest was just the beginning of The People’s Mobilization of the National HIV/AIDS Strategy Counter Conference (PMCC), held Dec. 7-8 in Atlanta, and running concurrently to the National HIV Prevention Conference (NHPC). Mirroring the need for intersectionality and inclusivity in the fight to end HIV/AIDS, HIV PJA planned PMCC to offer an alternative, strategic and accessible space for those who could not attend the larger NHPC, where leaders from CDC, NIH, HHS, and other federal agency leadership were in attendance. PMCC offered a community-built space where constituents most impacted by HIV were in control of the dialogue.

The LGBT Institute, housed within The Center for Civil and Human Rights, hosted the conference where the at-capacity crowd of activists and advocates discussed issues and communities absent from NHAS, planned collective advocacy work, prioritized policy issues and built power among communities ahead of changing federal leadership in 2016.

Anna Forbes, long-time HIV/AIDS consultant, remarked, “Advocates play a vitally important role in HIV/AIDS response and this conference provided a very focused way for advocates to be heard.” Forbes added, “[The Counter Conference was] small but mighty. This is the first effort of an event that I hope will be continued. PMCC provided an important space for people who have concerns that are not being addressed adequately from the National Conference to be heard.”

PMCC covered a wide variety of topics including reproductive justice and sexual health facing WLHIV, Southern policy and advocacy challenges, criminalization and stigma, and structural interventions for reducing HIV-related disparities, focusing on vulnerable populations, such as sex workers, incarcerated individuals, immigrants, and transgender and gender non-conforming people. Arneta Rogers, Reproductive Justice and HIV Fellow at Positive Women’s Network, said, “Suraj did an excellent job of bringing groups together to allow a more intersectional analysis of HIV and make a more accessible and productive space. We not only focused on the exclusions from NHAS, but also what policy asks we have, and what we could do to make HIV advocacy more inclusive. We focused on sex workers, Transgender folks and criminalization.”

One of the concrete outputs from this process was developed during the sex workers’ panel — a list of specific advocacy challenges that sex workers' rights organizations and HIV-focused organizations could effectively address jointly.

Moving forward, HIV PJA will focus on the best way to galvanize the PMCC’s energy and ideas and identify significant federal HIV issues as the basis for a policy and advocacy agenda of winnable battles ahead for key communities to concentrate collective energy on in 2016. Forbes summarized, “Moving forward, the role of HIV PJA will be to cultivate and maintain momentum. The Counter Conference was one manifestation of that. The process has been going on for years, but has been becoming more articulate and powerful and we need to keep moving in that direction.” HIV PJA’s continuing efforts will help ensure the full involvement of communities in the future success of the strategy and in the final year under the Obama administration.