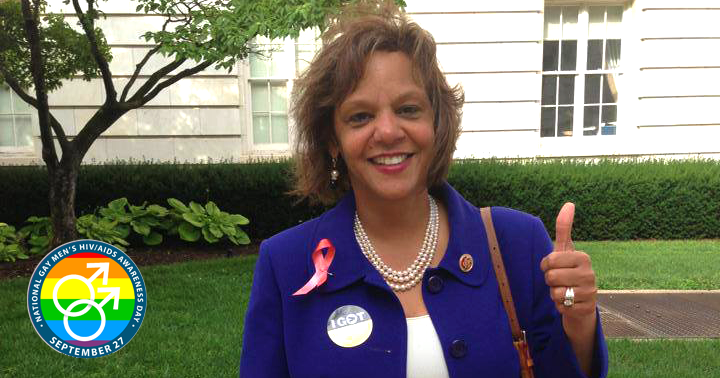 Today, on National Gay Men's HIV/AIDS Awareness Day, we ponder the significance of HIV and AIDS as an American and international reality. 35 years have passed since our country initially confronted the biological challenges of this epidemic. We still grapple — oftentimes clumsily — with stigma and our social response, while contending with the precarious nature of life in the face of HIV/AIDS. Yet neither stigma nor silence nor apathy have any constructive place in our collective battle to end the HIV epidemic.

Due to the development of antiretroviral therapies, savvy advocacy, well-funded public health campaigns, and greater emphasis on early testing, many gay and bisexual men who are HIV-positive and have access to regular treatment now live long and thriving lives. The transformational pre-exposure prophylaxis, PrEP, enhances the opportunity for people more vulnerable to contracting HIV to lead loving lives in the context of intimate family, friendly and romantic relationships.

Current trends suggest that one in two Black gay and bisexual men will be diagnosed with HIV in their lifetime, and in my home state of Illinois, there are 1,800 new HIV infections each year, 50% of which are in the Black community. According to the Illinois Department of Public Health, nearly 40% of new HIV cases in the state are among young people aged 20-29. These reports show that we must continuously intervene with those most vulnerable to provide timely and culturally relevant health discussions, policies and programs.

In the late 1990s, my esteemed forerunners of the Congressional Black Caucus were astute enough to declare a state of HIV emergency within the Black community. In their wake, I again ring the alarm. By consistently raising consciousness within our friend, family, and socio-political circles, I am very hopeful that we may usher in an AIDS-free generation.

There is great opportunity to be a part of this momentous effort. Schools and teachers can host the hard conversations with young people about sex and sexuality. Worship centers and worship leaders can hold transparent youth forums about the importance of complete wellness and wisdom in decision-making. You can personally support community-based centers, like the AIDS Foundation of Chicago, that are repositories of correct and empowering information on HIV. More than anything, you can become an emotional safe space for anyone who is living with HIV, or who may be vulnerable to the virus.

To people younger and older, opposite-gender-loving or gay or bisexual, there is wisdom, not shame, in being aware of your HIV status, and even sharing your status with people whom you trust or wish to encourage with your story. Likewise, there are sure regrets to an individual’s or a community’s willful ignorance and silence on the issue. Therefore, I implore health care providers to be vigilant to the unique needs of gay and bisexual men living with HIV. I encourage all people — especially gay and bisexual men — to insist that HIV screening is a regular part of the wellness experience. Being aware of your own HIV status and having empathy for the unique health and social challenges that accompany the HIV experience can only engender a healthier, stronger nation. I, too, am sure to get tested regularly.

As Chairwoman of the Congressional Black Caucus Health Braintrust, I am committed to engaging with local and national HIV/AIDS advocates, such as the AIDS Foundation of Chicago, to learn more about the unique trials of people living with HIV. Moreover, I am so very proud of those tirelessly involved in the frontlines against HIV/AIDS. Whether you are an advocate, researcher, loving partner or parent to someone living with HIV, you are absolutely the force behind this fight. I am all the more enthused to promote equitable access to quality health programs, and to craft thoughtful, well-informed policy interventions that advance the overall health of our nation.