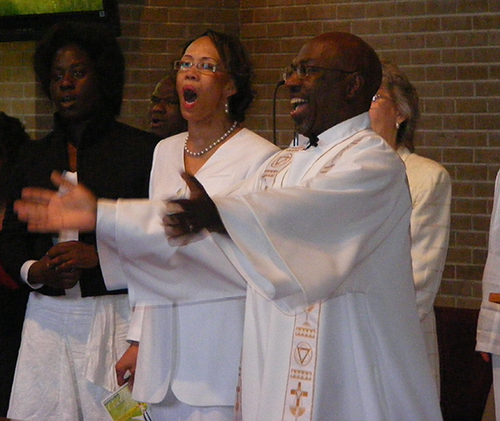 Rev. Charles Straight, who serves on the Board of Directors for the AIDS Foundation of Chicago, was selected to open the International AIDS Conference with an invocation.

Before the pastor's firm handshake and sonorous voice, comes the smile.

Radiant, wildly contagious, Rev. Charles Straight's grin seems to welcome you instantly, no matter who you might be.

Come Sunday, July 22, Straight will beam that smile down upon the thousands in attendance at the International AIDS Conference (AIDS 2012) in Washington D.C. He was chosen by conference organizers to give the convocation, the words of prayer that will officially begin the conference. For Straight, it will be a profound moment in his 27 years dedicated to the HIV/AIDS cause.

“It is the greatest honor I could have imagined,” said Straight, pastor of the Faith United Methodist Church in Dolton, Ill., who serves on the Board of Directors for the AIDS Foundation of Chicago (AFC).

Straight comes to the AIDS ministry with a distinctly personal connection to the cause. Openly gay and HIV-positive, he has worked for years to teach African-American churches how to better support those living with HIV in their congregations.

Currently, he chairs the Faith Responds to AIDS, an AFC initiative designed to educate and empower black faith leaders to better respond to HIV and the stigma that surrounds it.

Recently, Straight took a moment to answer a few questions for Inside Story about the ongoing evolution of the African-American faith response to AIDS and what the invocation means to him.

Inside Story: What called you to this cause?

Rev. Straight: A desire to get factual information out to people and a need to help those already infected. …  As I look back I know it was God’s leading and placement.  It wasn’t even my idea to start the ministry, but I don’t believe in coincidence.

IS: What has been the greatest challenge in your work?

RS: Getting church leaders to see what a great ministry opportunity HIV is.  With so many people hurting, hopeless, in despair, and needing all the strength and courage the church has to offer — who could ask for a better way to show the world Christ?

IS: Historically, how have African-American churches responded to people living with HIV in their congregations?

RS: In my opinion the church has responded in a very disappointing way.  The church has been slow in its response, if at all, in most cases.  People living with HIV and families impacted by HIV have found themselves rejected, stigmatized, and just plain beaten up far too many times by their local church in the black community.

IS: How has that response evolved?

RS: We are getting better. I see more and more churches and church leaders responding these days.  With things like the president’s leadership through a National HIV Strategy and his and the Vice-President’s push of the nation and the church to address the issues of homophobia (which is one of the greatest barriers to prevention in our community) with their open support of full marriage equality, it lays the groundwork to address some of the fundamental problems that has kept the church out of the HIV fight.

I hate to be pessimistic but when I see black women with a HIV infection rate 15 times that of their white counterparts and a 48% increase in infection among young black gay men, I think whatever the response — it’s still too slow.

IS: Why is it important for the faith community to be directly engaged with the fight against AIDS?

RS: It’s important because part of what it means to be a person of faith is to respond when there is a crisis in the lives of those we are in community with. The scriptures say what good is a faith that does not meet the human needs of those we call our brothers and sisters.  In particular, the black church has always responded to the issues of civil rights, low income, unemployment, gangs, drugs, health inequities and social injustices of all kinds in our community. HIV should not be an exception!

IS: I know you lost your longtime partner, Elmore Dikes, to cancer this year. Does this invocation have special meaning for you in the wake of that personal tragedy?

RS: Elmore was my greatest supporter.  He didn’t think there was anything I couldn’t do. So when I got the invitation, I was very sad that he won’t be there.

IS: What are you most looking forward to about AIDS 2012?

RS: You mean more than I might be in the same room with the President?  I think it might be that we are closer now than we have ever been to a cure and a world free of HIV. And AIDS 2012 will have great new breakthroughs and motivation for the world.

Straight's convocation, along with the rest of the opening session will be streamed live online here beginning at 6:00 p.m. CST.