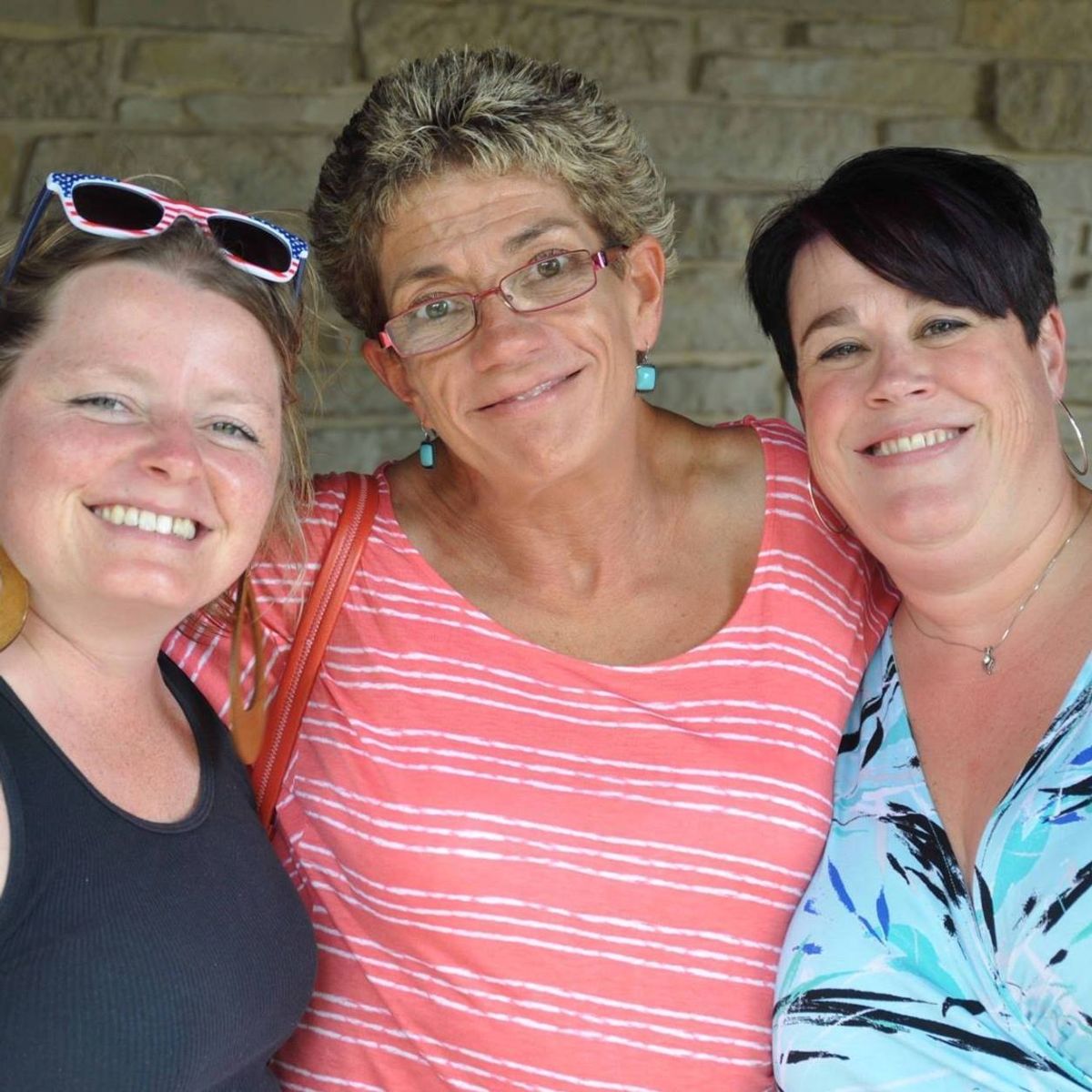 McHenry, Illinois, has been Jamie Braxton's home since she was 8 years old. She loves the familiarity that living in a smaller city brings (McHenry has a population of 26,600). Jamie (pictured at left, in center) grew up in a two-parent household, regularly attended church and describes her upbringing as overall normal. In 1995, when she was 33 years old, she even began planning to grow her family in McHenry when she found out she was pregnant during a routine doctor's visit. Jamie and her husband were thrilled by the exciting news — until she received an ominous voicemail 3 weeks later.

"I would call home to check voicemail a couple of times a day because, you know, people didn't have cell phones back then," said Jamie. "There was a message from my OBGYN's office ... 'Can you please call the office as soon as possible? The doctor needs to speak with you.'"

A number of things ran through Jamie's head, but ultimately, she knew something was wrong. She called the office back as soon as she got off from work; the receptionist noted that Jamie's doctor left for the day, but she said that he would make his way back to meet with her. This only worsened Jamie's already heightened anxiety, so she called her sister for support. The two met up at the doctor's office and, upon arrival, Jamie was led into a room filled only with tissue boxes, two bibles and muted paintings on the walls.

"It was a Monday, Oct. 2, about 3:15 in the afternoon. I remember he had on a blue and yellow striped tie. I could cry about it right now thinking about it," said Jamie as she recounted the moment. "He could not look at me. He kept looking at my chart and he kept swallowing and he kept saying, 'Your tests were all normal, except for one.' And I told him, 'Just tell me ... I just want to get it over with.' He said, 'What I'm about to tell you is going to change your life forever, and I don't want to have to be the person to have to do that to you.'"

The doctor diagnosed Jamie with AIDS that day and revealed that her T-cell count was at a shockingly low 76. Although she had been showing symptoms of a weakened immune system for some time, Jamie's oral thrush and the rash around her mouth were attributed to her use of inhalers for asthma after she was hospitalized a few years back. Jamie believes that because she was a straight, white woman living in a small city, doctors never thought she was "at risk" for HIV. Needless to say, Jamie was distraught.

"I remember I detached from myself. I really did," said Jamie. "I just started screaming at him, 'You're a quack! How long have you been a doctor? Run the tests again!' … That's when my sister came into the room, and she said I was wailing like an animal in a trap."

Jamie started treatment right away, but her options were limited in the mid-nineties. She struggled for months finding the right combination of medications that her body would accept, and after some time she lost all faith and accepted that she was going to die soon. With her AIDS diagnosis and her pregnancy at the forefront of her mind, Jamie eventually had to make the most difficult decision of her life.

"They gave me 3 to 5 years to live when I got diagnosed. I made them tell me how long because I needed to know what to do about this baby. I ended up having an abortion," said Jamie. "I am avidly pro-choice, but I never thought an abortion was something I would do for myself. That was the hardest part."

Those first few years after being diagnosed were extremely trying for Jamie. However, her method of healing was to continue living her life and not let her AIDS diagnosis get in the way of (what she thought) were her final years. She continued to work, take care of her home and maintained healthy relationships with family and friends. Eventually, one of Jamie's friends recommended she seek services at Northwestern University, where they knew lots of other people diagnosed with HIV and AIDS went to receive treatment. Although the trek from McHenry to the Chicago campus was over 3 hours round-trip, Jamie was committed. She attributed the services she received there to saving her life. Later, she was referred to Open Door Health Center's clinic in Elgin — a much shorter commute to and from her home. At Open Door, Jamie received wraparound case management services for years. She was connected to all the resources she needed, including the help she received last summer from the AIDS Foundation of Chicago (AFC).

Jamie had been experiencing poor balance, fainting spells and ringing in her ear which eventually led her to see a specialist that recommended she get an MRI and a CT scan for her brain to check for a tumor. It turned out that she had a Chiari malformation — a condition in which her brain tissue extends into her spinal canal — that was connected to her history of HIV-related toxoplasmosis, a parasitic brain infection.

"I just didn't make enough money for the things that the insurance didn't cover. So Juan Mercado at Open Door said that AFC still had a program where they would give assistance with HIV-related medical bills," said Jamie.

She worked with Aziza "Zee" Nassar, who was a certification specialist at AFC, and received assistance from the Ryan White Program to pay off thousands of dollars in medical bills. Although Jamie works as a medical assistant for an orthopedic surgeon and is self-supporting, her history of medical conditions both linked and unlinked to her HIV and AIDS treatment can make her medical bills expensive and any assistance she can get with paying those off is a relief.

"I am so grateful to places like AFC. This HIV-related treatment I had to have last summer involved some big, expensive tests. Without help from you guys, those are things I might have let fall by the wayside,” said Jamie. “Even though I'm a hyper-compliant patient, there comes a point where you just don't have the money to pay for additional treatments. I would’ve been paying off that $4,000 for the next 10 years.”

Jamie is optimistic about what the future holds and gets through each day with support from friends and family. She has also become extremely vocal about her HIV status over the years, and regularly shares her story with others in hopes of spreading awareness and combating stigma.

Categorized under Case management, Illinois and Inside Story.

By Kennedy Brookins When I agreed to write a post about Dr. Mildred Williamson, who most recently...
Read more...

by Raven Feagins Michelle Hennigan is a compassionate mother of one who lives in the small village...
Read more...