In the coming weeks, Illinois residents will vote on an amendment to the state Constitution that seeks to transform for the better how the state taxes each resident's income.

Currently, all residents are taxed on a non-graduated or flat rate of 4.95%. For example, a person making $35,000 per year is taxed the same percentage of their income—4.95%—as a person making $35 million.  The proposed amendment would change that rate to a graduated rate in which higher incomes are taxed a higher percentage than lower incomes. Only people who make $250,000 a year or more will see their taxes increase, while 97% of Illinoisans will no change in their current taxes or a tax cut.

To help you understand this issue ahead of voting, AIDS Foundation Chicago (AFC) compiled seven things to know about the proposed change.

#1 Illinois residents must approve changes to the Constitution, which is why you're being asked to vote on this issue. If the amendment passes, the graduated tax rate will go into effect Jan. 1, 2021.

#2 This amendment would alter Article IX of the state Constitution.

In accordance with this section, Illinois imposes the same income tax rate on all residents, regardless of your income. The amended version would strike out the first two sentences, which includes language that states income is taxed on a non-graduated rate. If this amendment passes, Illinois can tax individual residents’ income on a graduated rate, meaning different rates based on each resident's income bracket. It will look like this on your ballot: 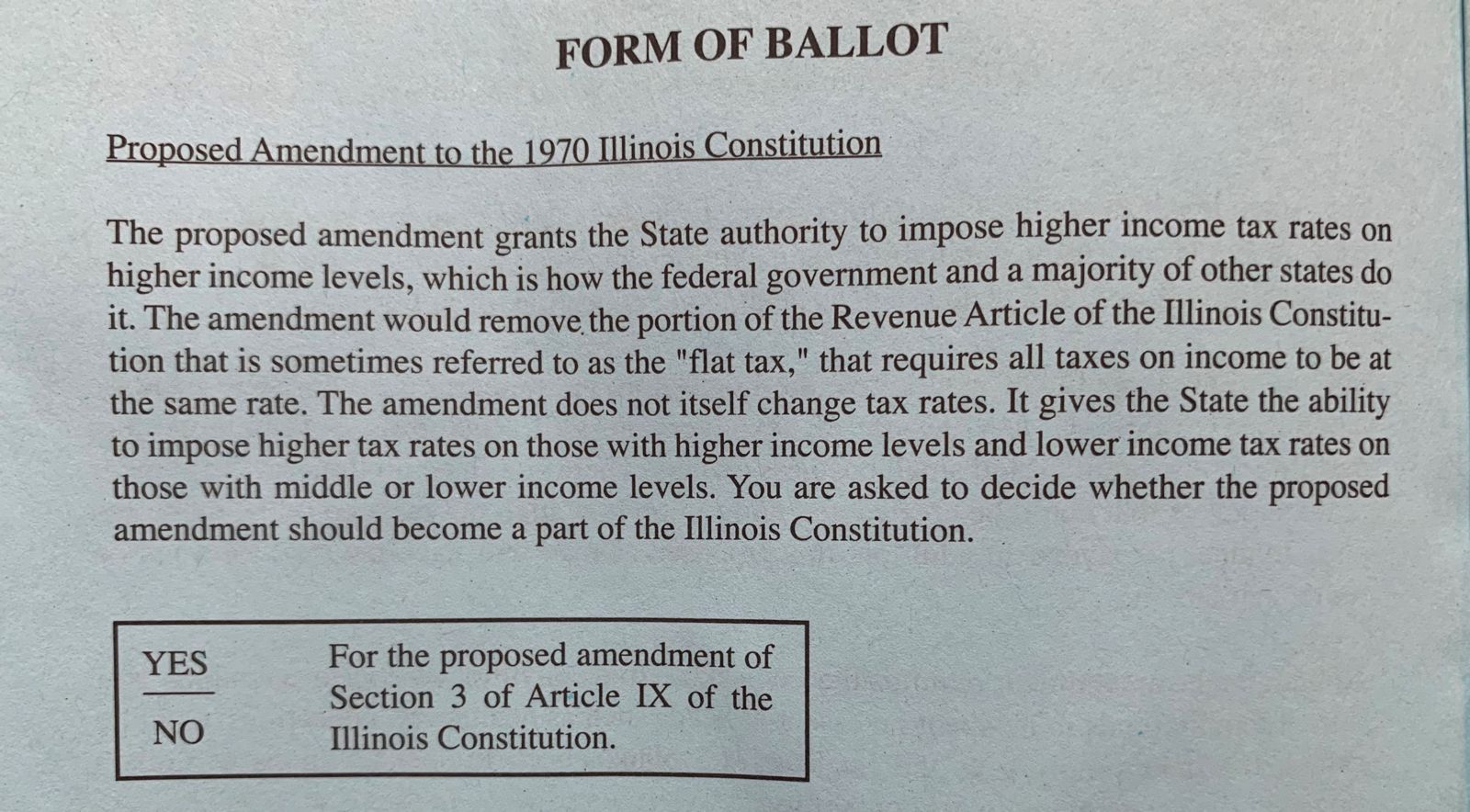 #4 Some arguments in favor of the amendment say the current tax structure is unfair, while pointing to the potential uses for generated revenue.

If you've come across this issue, you might have come across the phrase "fair tax." That's because those in favor of the amendment say it's unfair to tax lower-income residents the same rate as those with higher incomes. A graduated tax moves Illinois closer towards an equitable structure that better supports lower- and middle-class families, some argue.

There's no guarantee for what the funds generated from an altered tax structure will be used for, but those in favor have pointed to the needs for state investment in things like HIV prevention and care, affordable housing, public schools, mental health treatment and transportation.

#5 Some arguments against the amendment say the state's spending is out of control; the pandemic makes it an unideal time to implement a change; and the State can use the revenue generated however it wanted.

Opponents argue the State should first get its spending under control before acquiring the additional revenue a graduated income tax could generate. Other opponents of the amendment say the pandemic has created a financial burden that would be exacerbated by a change in tax structure. At odds with those in favor of the amendment, some against the amendment also underscore that there's no guarantee how the revenue generated will be spent. It's up to the State legislature and governor to decide how the revenue will be used.

#6 AFC strongly supports the amendment because we believe it will benefit the community we serve.

AFC believes that the graduated tax is one of the many steps needed to achieve economic justice in Illinois. AFC serves a community that is disproportionately made up of folks who have experienced homelessness, job loss and instability, and economic hardship heightened by systems rooted in racism, transphobia and other discriminatory views and practices. If a graduated tax could prevent someone from slipping into poverty, we believe that’s a step in the right direction. And fundamentally, we believe that people who can afford to pay more, should, while people who earn less should pay lower taxes.

#7 Illinois would not be the first nor only state to implement a graduated income tax. The federal government and more than 30 other states already tax residents’ income on a graduated rate rather than a non-graduated rate.

To learn more about the facts of a proposed graduated income tax, read this Chicago Sun-Times article or this WBEZ article. To request a vote by mail ballot, you can request one from your local election authority or here. To register to vote or check your registration status, click here.

Categorized under Illinois and Inside Story.

Getting to zero through sex ed

By Raven Feagins This post originally appeared on November 29, 2018 on GTZIllinois.hiv ....
Read more...