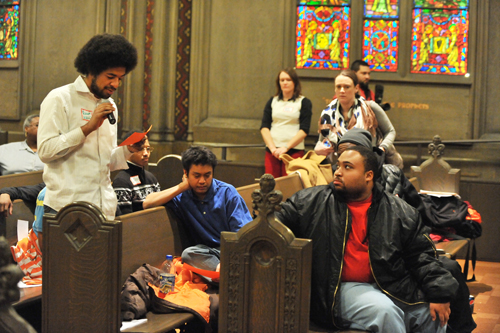 A young Asian-American man stood to address the crowd of 200 or so people gathered at the Chicago Temple to discuss youth homelessness on Wednesday.

John Cerdon, born in the Philippines and raised in Chicago, was a bit of an expert on the topic. He has been homeless since he was 13 years old.  Recently, he’s been staying at the Crib, the Night Ministry’s low-threshold overnight youth shelter.

“The city needs more low-threshold shelters for youth,” said Cerdon, 21. “We want to keep what we have on the North Side, but they should be available in all parts of the city.”

Hands flew up in the air and fingers furiously wiggled — the silent applause gesture at the two-day brainstorming session on homelessness in Chicago, hosted by the Chicago Alliance to End Homelessness, the Corporation for Supportive Housing and the city of Chicago.The purpose of the “fishbowl" discussions was no less than to define Chicago’s Plan to End Homelessness “2.0," to breathe new life into the shared goal of sheltering those who experience homelessness.

Over the two full days of discussion, youth was one topic among many, including employment, systems integration, and interim and rapid rehousing.The recommendations from the discussions will be compiled in the coming days and will help form the new homelessness plan.

Cerdon was surrounded by a peer group of homeless youths who, like him, came to the discussion armed with recommendations written on small pieces of paper.

They had good reason for concern.

There are 20 beds at the Crib, where Cerdon sleeps, and 189 for homeless youth in the entire city, according to the Night Ministry website. Meanwhile, there are an estimated 2,000 young people experiencing homelessness.

A low-threshold shelter, as opposed to a high-threshold program, typically has fewer rules and is easier for high-risk youth who have suffered trauma to succeed in.

“As we look at creating 2.0, we have to make sure we’re including youth who don’t fit into black and white boxes we’ve created,” said Joe Hollendoner, vice president of programs for the AIDS Foundation of Chicago (AFC) and one of the discussion’s panelists.

Nationally, LGBT young people are four times more likely to be homeless than their heterosexual peers, said Hollendoner (at right), who worked for the Howard Brown Health Center for the past 11 years and was founding director of the Broadway Youth Center.

It’s important to have multiple options — drop-in centers, low- and high-threshold shelters — to meet young people experiencing homelessness where they’re at, he said.

“The more we can create opportunities and options for young people, the closer we are to solving this,” Hollendoner said.

“There’s no low-threshold drop-in center on the South Side,” Linas said, pausing a moment to let the words resonate.

“A lot of young people are being excluded because those options aren’t on the menu,” she continued.

Homeless youth are a population of specific concern for AFC, which provides HIV-related housing assistance for about 1,300 families.

And remember this sobering context: between 2006 and 2009, the number of young gay/bi African-American men infected with HIV in the United States increased by 48 percent, according to the U.S. Centers for Disease Control.

As AFC develops its new three-year strategy to be launched later this year, a new focus will be put on serving young gay/bi men, particularly those of color. The details are still being worked out, but Hollendoner said he hoped AFC could play a major role as a convener of organizations to augment the options available for homeless youth. Early interventions to prevent homelessness will be key, too.

Fortunately, there are also many young people at the table, who have experienced homelessness firsthand and are determined to help improve the system.

Robert Dibbles is one of them. Homeless for many years, the 24-year-old is a member of H.E.L.L.O. (Homeless Experts Living Life’s Obstacles) and is involved with the City Task Force on Youth Homelessness.

“The city needs to include the task force in the plan,” Dibbles said, addressing the crowd.“Youth are important — we are the future.”

Hands immediately shot back in the air, silently applauding. 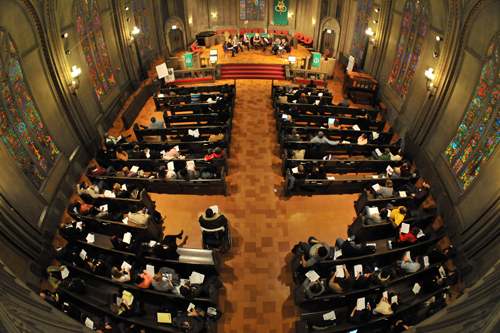