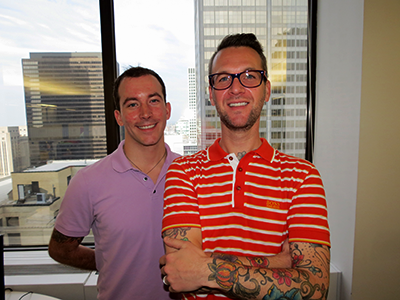 TEAM TO END AIDS (T2), a fundraising arm of the AIDS Foundation of Chicago (AFC) that trains participants for distance runs and triathlons, is thrilled to welcome Keefer Pulford as an interim Manager of Endurance Events, effective immediately.

After eight years as a participant with T2 and over a year as Manager, Kevin Ciacco will leave AFC to enroll in nursing school fulltime.

“Kevin helped T2 get to a great place,” said David Ernesto Munar, President/CEO of AFC. “Comparing this month with early June last year, we have more participants registered now, and we’ve generated more revenue. This speaks volumes of Kevin’s work and highlights T2’s stalwart infrastructure. Keefer will be able to pick up right where Kevin left off.”

Though AFC will greatly miss Kevin’s leadership at training sights and in the office, Keefer has deep ties to T2 and is a strong advocate in the fight against HIV/AIDS.

Keefer, 41, acknowledges that many participants in T2 are in their 20s and 30s and might not remember the height of the AIDS epidemic in the early 90s.

“There’s a time when this younger crowd needs a little more education,” Keefer said. “HIV is often overlooked and not given the attention it deserves. Many people think that we have these pills nowadays that allow people to live a happy life, but it’s not always a happy life. There’s so much more to HIV; there’s stigma and injustice. I just want to be a part of T2 to let people know that what they are doing is affecting this whole community, and it’s deconstructing these barriers in a profound way.”

Keefer loves the camaraderie with T2, and he wears his team-branded singlet whenever he races, even if he’s not in Chicago.

“I recently ran the Cincinnati Half Marathon, Chicago Spring Half Marathon, and Soldier Field 10 Miler,” Keefer said, “and I started crying every time I looked down at my shirt. It’s that emotional. You’ve got this community supporting you, and it reminds you of the people you’ve lost and the people you want to stay alive.”

Kevin can identify with this emotional connection to the program.

During the end-of-training Triumph Parties for the Chicago Lifetime Tri and Steelhead Ironman 70.3 last year, Kevin stood before his athletes and cried.

“I just looked into the crowd and saw all these people that I helped grow,” Kevin said. “Many were people that kept saying, ‘I can’t do this, I can’t do this,’ but they did, and they were sitting out there, waiting for their race the next day. They were going to do it. After helping them raise thousands of dollars for AFC and training them over hundreds of miles, they finally made it. That’s what I’m going to miss most about this job: the people.”

Keefer was once one of those faces. His introduction to T2 actually came through the AIDS Run & Walk, where he met several individuals training for the Chicago Marathon. He always wanted to compete in a 26.2-mile race, so it didn’t take much encouragement to get him to sign up during T2’s next registration cycle.

He was hooked on marathon running after that and began to look for other ways he could share his talents with AFC.

Keefer joins Cecilia Boyd and Ali Vos as a manager, and together they hit the ground running, preparing for the Chicago Triathlon Season Kickoff Event on June 14. The event convenes in Millennium Park, where participants don their wetsuits, goggles, and running shoes in order to complete a 1.5-mile dash to Ohio Street Beach for a dip in Lake Michigan.

“I’m thrilled to be here,” Keefer said. “Kevin did a great job with this program. It’s strong, it’s growing, and I’m eager to take it to the next level.”