Strength of a Thousand Cranes 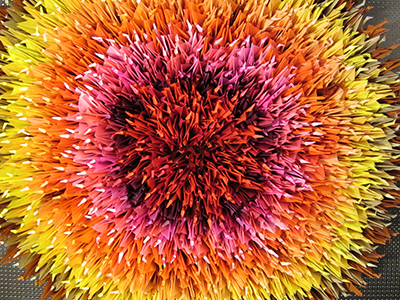 Masumi Yoneyama is an Ironman—but that’s not entirely due to the 70.3-mile race she aims to conquer this August with TEAM TO END AIDS (T2).

To learn why, we have to go back to 2011, the worst year since her mother’s death over a decade ago.

Working at Trader Joe’s, Masumi did a lot of heavy lifting. She admits, “I probably didn’t use proper form when breaking down wine crates, and that’s what really hurt my back.” But her injury didn’t express itself until she climbed a ladder and caught herself as she began to fall.

Though the ladder stayed upright, it came at the expense of her spine: She overextended it and would soon discover excruciating pain.

For four-and-a-half months, she could barely move. Crippling jolts of agony accompanied everything she did—the result of two collapsed discs. Her Orthopedist said that she would never run again, that she had the bones of a 60-year-old woman, that her discs would remain collapsed.

Masumi grew depressed, seeing no end to her pain—except through suicide. She had always been a happy, cheery person, finding joy in music and athletics, but in the context of her injury, she had become a morose reflection of herself.

“It was just a really bad time,” she recalled.

Her boyfriend broke up with her and her last remaining grandparent died, shrinking her already small family. Something had to give.

“Things didn’t change until I decided that I was tired of being miserable. I didn’t like being dark and sad,” Masumi said. A therapist gave her a book that, she admits, has a cheesy title but was exactly what she needed.

Genie in Your Genes taught her about the power of the mind, and she took it to heart. Daily, she meditated and visualized herself being pain free. Though Masumi wasn’t an intense athlete before her injury, she desperately wanted to run again, so she did—in her mind.

She pictured herself in stride, tasting the air, racing, crossing the finish line.

After two weeks of intense mental focus, Masumi walked into her physical therapist’s office without a limp. The therapist was shocked, wondering if she had received shots for her pain, but she didn’t. “I read the book you gave me,” Masumi told him.

Still, her therapist agreed with the doctor and said that she would likely never run a marathon again, but he suggested she try triathlons. Though she had never been a swimmer or biker, she figured she’d go for it. 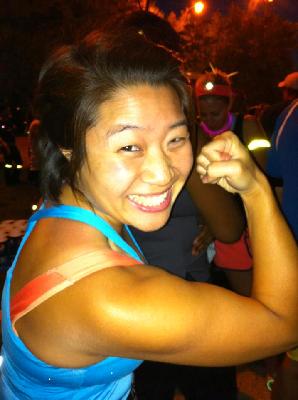 A couple months later, Masumi completed the 2012 Chicago Lifetime Tri in 1:41:02. More importantly, she lived the best day of her life.

Masumi was rediscovering herself: her love of music, her passion for art, her enthusiasm for sport. She joined TriMonster, an endurance training program at Fitness Formula Clubs (FFC), where she would soon meet Kevin Ciacco from T2.

Kevin, AFC’s multisport events manager, was hosting an information session at FFC for athletes interested in participating in Steelhead Ironman 70.3. Masumi was in the audience, and she was committed to finishing the race by the end of Kevin’s presentation. Though she didn’t have an obvious connection to the fight against HIV/AIDS, she liked the challenge of mixing a triathlon with fundraising.

“I have never raised money before,” she said, but she quickly corrected herself. “Well, I guess my mom bought cookies from me once for a school fundraiser when I was in band, but that was it.”

Through all of her training, Masumi had been focusing her meditations by folding Origami cranes. According to Japanese folklore, anyone who creates a thousand paper cranes will have their heartfelt wish come true.

T2 was the perfect intersection for Masumi’s artistic and athletic lives, providing her with a platform to host a concert that would also display her artwork with cranes. All of the proceeds would benefit the AIDS Foundation of Chicago.


Masumi called this the “Happiness Project,” and on May 5, she pulled it off, raising $880 for people living with HIV/AIDS. What’s more, her event bolstered her mission of spreading peace and joy.

Now all she has left to do is the Ironman 70.3, which for Masumi, should be the easy part.

You can visit her T2 fundraising page to follow her training or make a contribution.