So much can change in ten years — in world history, in fashion trends and in the way someone manages his relationship with HIV/AIDS.

Ten years ago, Armando Ramirez received some upsetting news: he was HIV-positive. For three years before that, he had been on his own, rejected by his family after Ramirez told them he is gay.

Ramirez, now 34 years old and living in Chicago's Back of the Yards neighborhood with his partner, used this news of his new HIV status as a way of reconnecting with his family.

"When I was diagnosed, I went home to try to rebuild the relationship with my family that was lost when I came out to them," said Ramirez, looking out across a park toward the Chicago skyline. "Being HIV-positive became a way for me to recover and heal those damaged relationships."

Another way that Ramirez embraces who he is today — and supports those who are in the HIV/AIDS community — by running AIDS Run & Walk Chicago, the annual outdoor event produced by AIDS Foundation of Chicago.

"I run a lot of races, and the most important one for me is the AIDS Run & Walk," said Ramirez. "Last year's race marked the tenth year of being HIV-positive. I was really emotional throughout the race because I kept thinking about where I was ten years ago and where I am today." 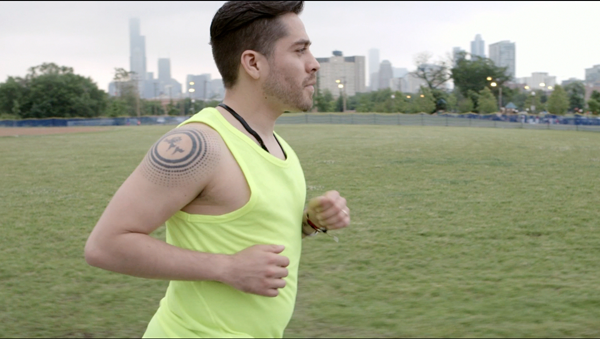 And today, Ramirez is full of life — he's got an undetectable viral load, his health has never been better, and the stigma he felt from his family and the world has started to melt away.

This year, Ramirez is planning on running AIDS Run & Walk with his partner.

"My parents think he is a great person with a great heart, but they're still not comfortable with us being public with our relationship," said Ramirez. He moved from Mexico with his family when he was 6 years old. "It's hard for them to hear negative comments about us."

Not everything can be fixed in ten years, but Ramirez is optimistic about the ways his relationships with family and friends will continue to grow to embrace him and his HIV status, in ten years and beyond.
"'HIV-positive' is not what I am. It's just a part of me," notes Ramirez. "I take the pills, but it's just a daily routine. My virtues are what people see in me — not my HIV status."

AIDS Run & Walk Chicago will be held on Sunday, September 14 at Arvey Field in Grant Park. To register, donate or for more information, visit aidsrunwalk.org.