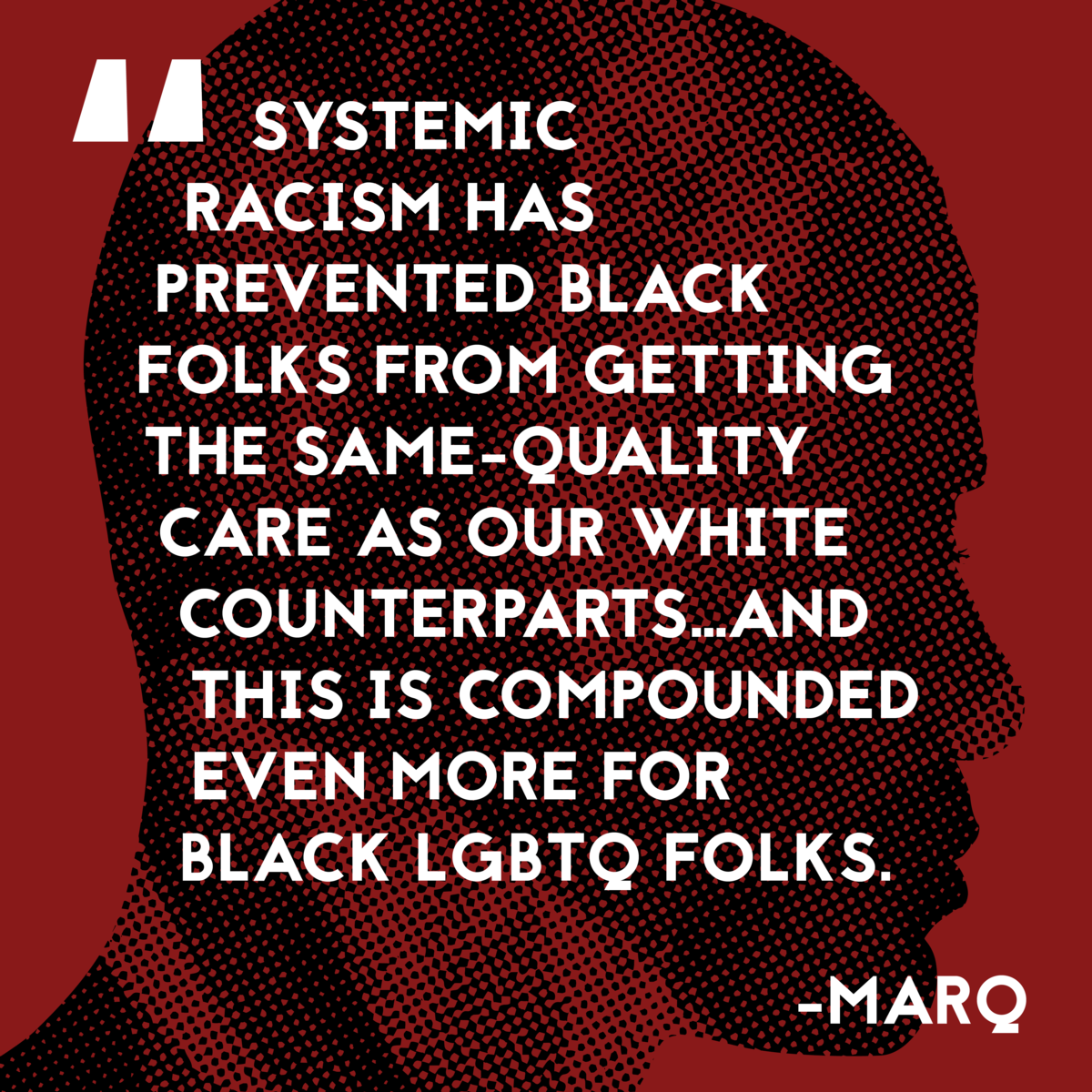 This post originally appeared on January 24, 2017 on Angry Black Hoemo. Marq is an activist based in Chicago who proudly and un-apologetically expresses their truth.

…but not in the way they’d like to think.

So, at the time of this being published, we’re 2 weeks from National Black HIV/AIDS Awareness Day. I think this is as good of a time as any to finally do a piece tackling the subject of HIV/AIDS among Black men who sleep with men (or MSM in scientific terms). I was motivated to write about this after coming across this documentary on the epidemic levels of HIV among Black, Gay men in Jackson, MS. This started as a thread on Twitter, but I felt this topic was more than due the attention of a full post.

Plus, I just recently passed my 3-year “Poz-aversary” (yes…I just made that up), so I’ll always be heavily invested.

When we talk about the HIV/AIDS epidemic among Gay men, in general, there’s often an air of (homophobia-driven) judgement and condescension, dripping with implications that any of us who contract the virus “deserve it” for our “immoral” behavior. And when you add in the racism of addressing Black, Gay men, that attitude only grows…even from other Gay men.

Now, for argument’s sake, let’s entertain that this idea of HIV being an issue of “immorality” among us, might actually have some merit, and isn’t complete and total bullshit. Even if we wanted to go along with that idea, that perhaps, Black Gay men see higher rates of HIV/AIDS due to “immorality,” well…maybe so…but it’s not immorality on our part.

See, by the definition that society has set for what’s “moral” and “responsible” in terms of sex, Black folks have been found to actually be more “moral” than others. Namely, it’s been observed that Black folks are more likely to use condoms than any, other race. So, if we’re more likely to use condoms than white people (thereby falling within this collective idea of what being sexually “moral” or “responsible” is), then why are we still far more likely to be affected by HIV and AIDS?

AIDS reached the astronomical levels that it did, in the first place, largely because then-President, Ronald Reagan, and his administration, did fuckall to address the rapidly-rising number of deaths from the virus throughout most of the 80’s. And it’s clearly no coincidence that two of the demographics most heavily affected by the epidemic were the Gay & Black communities (both demographics historically despised by the right-wing)…so, of course, Black, Gay people who fall into the intersection of the two would see figures that much more devastating. By the end of the Reagan Administration, over 25% of all AIDS cases were among Black people…and that figure would continue to rise for over a decade (while rates among white people started on a decline by the mid-90’s).

In addition, it should now be common knowledge that systemic racism has prevented Black folks, as a whole, from getting the same-quality care as our white counterparts…and this is compounded even more for Black LGBTQ folks. Having all of our health needs adequately met from most doctors is a challenge…if we even have access to doctors, from the outset. Employment and housing discrimination often keep Black LGBTQ people from even having access to healthcare, at all. That lack of access to care (and the additional roadblock of homophobia from the doctors that we do manage to get to), leads to a lack of awareness around our own sexual health.

Many don’t have the access to proper and regular HIV/STI testing, causing many to walk around with the virus without even knowing it…and this is where the risk for transmitting the virus is highest. And for those who do manage to find out, we often don’t have access to treatment in the event of a positive diagnosis. In addition to the horrible health effects of letting HIV go untreated (namely, the virus being able to develop into AIDS), we know that being on treatment with an undetectable viral load is arguably the most reliable method of preventing transmission (a.k.a. Treatment As Prevention, or TasP).

I mentioned a lack of awareness around sexual health before…this is also a real issue. Sex-ed is terribly inadequate, even for many in the most privileged and centered parts of society. Queer and Trans people (and even more so, Black, Queer and Trans people) get absolutely nothing…at best, we might get told to use condoms or just abstain from such “sinful” activity…*extended eye roll*. Because of this, many of us don’t even have it in our heads to be diligent about sexual health. And this is made even worse by the culture of shame and stigma that’s been put on both HIV and Black, Queer sexuality…never mind that decades of negative propaganda has Black, Queer sexuality being commonly linked directly to HIV and AIDS.

Also, there’s the severe levels of homophobia that we see in the Black community (which is largely fed by white supremacy), which leads some Black men to live in the closet…which makes one even less likely to seek testing and/or treatment due to the aforementioned culture of shame and stigma. This adversely affects Black women…and, of course, the same issues of systemic racism (plus how that intersects with systemic issues around healthcare for women) impact their struggle with HIV/AIDS, as well.

In addition to ignorance, many are fearful to even wanna know that they might have the virus, at least partially, for the reasons mentioned, here.

Ultimately, the issue of HIV/AIDS among Black, Gay men (and other Black men who have sex with men) has nothing to do with whatever our level of morality is, but with proper 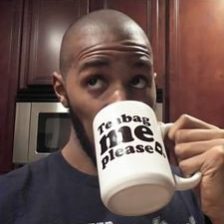 access to adequate resources around sexual health. This is why white, Gay men are seeing their rates of HIV transmission on a steep decline, despite the likelihood that they’re using condoms less often than Black people. Condoms are only one, small part of the equation in HIV prevention…it’s about resources. And resources have always been scarce for Black folks, in general, and even more so Black LGBTQ folks…and this is an issue that I don’t think anyone expects to see much improvement on, given who our new U.S. President is…and his VP.

…so, since bible thumpers and homophobes (and racist homophobes) like to dismiss this issue with citing our “lack of morality,” I think it’s more appropriate that we turn this around by properly citing who and what’s truly morally bankrupt: a white supremacist system, which maliciously ignored a nationwide epidemic for years. Then, even after it finally did come around, proceeded to deliberately deny a significant part of the population equal access to resources and care to help prevent and treat the virus, and continues to be dismissive of the issue, to this day. That’s the true moral failing, more so than anything my Black, Gay ass is doing in my bedroom…or someone else’s bedroom…or in a bar…or in a bathhouse…or…wait…what were we talking about?

But seriously, tone-deaf bigots love dismissing the HIV epidemic as an issue of “immorality”…and the thing is, they’re right. It’s just that the immorality is coming from them and the fucked up system that they created and maintain through their ignorance and hatred. So, from here on out, if we’re gonna play this “morality” card, let’s point it where it really belongs.

And one more important note: In these times, Black LGBTQ folks—as always, but now, more than ever—are gonna have to lean on and look out for each other. We’ve never been able to trust this morally bankrupt system to look out for us like it does others, and we obviously can’t expect it to get any better under Trump. So, one way of looking out for own is finding local causes that provide access to resources around HIV prevention and treatment in your area, and finding ways to provide support.

Given that I’m in Chicago, I’ll refer to where I go for my (LGBTQ-centered) HIV care: Howard Brown Health Center. Additionally, there’s the South Side Help Center, which focuses on HIV prevention among Black folks on the South Side of Chicago. There’s also PrEP4Love, which especially focuses on providing access to PrEP (Pre-Exposure Prophylaxis) for more marginalized communities in the city.

Additionally, here’s the page to look into and donate to Grace House, the program in Jackson, MS, featured in the linked documentary.

If you have some programs you’d like to highlight, please don’t hesitate to plug them in the comments…you never know who you might be helping!

There’s many great programs out there doing the good work of turning the tide of HIV/AIDS in our communities…I’m challenging us to be intentional and deliberate in supporting those efforts and each other. If we don’t do it, no one else will.