The Enduring Power of Angels

The AIDS Foundation of Chicago (AFC) will welcome Tony Kushner and his groundbreaking play, Angels in America, back to Chicago this spring.

Kushner (pictured at right) will be the guest of honor at AFC’s 2012 Dinner on March 27. Both parts of the play, Millennium Approaches and Perestroika, open at the Court Theatre on April 14. Proceeds from the opener will benefit AFC.

Much has changed in the 20 or so years since Angels first opened. Set in 1985, the play features characters struggling with and dying of AIDS, amid the callous social politics of the Reagan administration. AIDS was a death sentence. Fear was rampant. The future was very uncertain.

But the play still resonates today, and not just with those who were immersed in the AIDS epidemic in the 1980s.

Geoffrey Proehl, who teaches, dramaturgs and directs at the University of Puget Sound in Tacoma, Wash., has taught Angels for close to 20 years. Proehl said the play still has a powerful effect on his students. 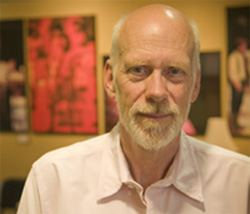 Professor Proehl (pictured at left) took a few minutes to respond to questions via email about Angels and its impact rippling through the years. What follows is an edited transcript of that exchange.

Inside Story: Why do you teach Angels in America?

Geoff Proehl: Students connect with it, more than about any other play I teach.

IS: What do your students gain from it?

GP: I was teaching it in November. A student from Chicago in the first year class came to class furious with Louis. He could almost not read the play because Louis made him angry. This led to a great discussion. I've often suggested Louis is, on the other hand, not so different from many of us, faced with the messiness of disease or aging.

Toward the end of the class, the student, Santana spoke again, of knowing folks with AIDS, of taking meals to them, of his two moms, and then he could not talk anymore, he was so moved, so broken. One student said, can we have a group hug? I said, let's wait a moment first. Someone does not always want to be hugged at that moment. But at the end of class, there were those hugs.

The next class began with students writing what they felt in that moment, what they learned from it. Later in the semester, the class of 17 acted scenes from the play. Santana played Belize in a scene with Louis. Kushner gave him words to speak and understand his frustration.

Another student wrote that he felt like Louis: a nasty divorce a couple years before, a move to a new town, moving in with an uncle, now dying of heart disease, a brother who was fighting a serious neurological disorder. This Kansas student fled to the Northwest and Puget Sound. But the play, in its honesty and compassion, helped him understand better what he was going through and that he was not alone. He performed a scene playing Joe opposite Harper, both wrestling with angels.

IS: Do you remember being personally affected when the play first opened?

GP: Yes. I directed a production several years ago. We worked with the Pierce County AIDS foundation. The panels we created on the history of the disease are still being used at the annual AIDS walk.

IS: What specifically about Louis upset your student, Santana, so much?

I think that the play still works because whether it is with a lover or partner or sibling or parent or even our own self, we all have to think about what we are going to do about vomit, sores and diseases. Just as with Harper and Joe, Louis and Prior, we all have to think about what it means to maybe need to love someone you love or have someone you love leave you.

I think some students, and I'd include myself here, find ourselves identifying with Louis. But I think others, find themselves, identifying with Prior, and the thought of not being there terrifies them, because they are afraid they may not be there. And so one response to fear may be anger.

Santana said as much when he reflected. His anger at Louis was a way of holding off the fear that he might not be there someday for someone who needs him.

In Angels, Kushner takes us to both edges and dares us to look over.

Tickets to An Angel Among Us: A Evening with Pulitzer Prize-winning Playwright Tony Kushner, the AIDS Foundation of Chicago's 2012 dinner on March 27, start at $225. They can be purchased online or by calling Rhett Lindsay, AFC’s manager of fundraiser events, at (312) 334-0935.