The Evany Factor: Impact of an Advocate 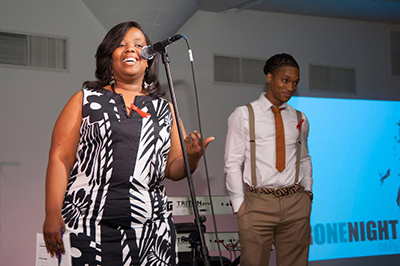 Evany Turk believes in change. As a warm, respected ambassador in many of Chicago’s underserved neighborhoods, she doesn’t just talk about making a difference; she lives it.

The Illinois House of Representatives recently passed a comprehensive, sexual health education bill, and Evany, an advocate for the AIDS Foundation of Chicago (AFC), stood behind the measure and continues to support it.

That’s because for her, it’s personal.

“I connected with the bill,” said Evany, who was a mother by her mid-teens and contracted HIV in her early 20s. “When I was in high school, we received abstinence-only education.  There was no talk about contraception. And I believe that comprehensive sex ed could have decreased my chances of getting pregnant at a young age—and decreased my chances of getting the virus.”

When she learned of her diagnosis, she was crushed. Yes, HIV would have a negative impact on her physical health, but the shame and stigma associated with the disease drove her to dark places.

For five years she wrestled with her past, contemplating suicide, but she always stopped short of tragedy.

With the help of a therapist, Evany began to reclaim her life and eventually transformed herself into the powerful woman she is today. As she emerged from her depression, she participated more fully in her kids’ lives, taking an interest in what they were learning—and in what they weren’t.

“My kids—they were between 17 and 18 at the time—they came home from school one day and said that they don’t talk about sex in the classroom,” Evany recalled. “They didn’t even have a health class. This had to change, and I knew I had to do something. The earlier youth start learning about sex, diseases, and pregnancy, the better informed their decisions will be.”

Evany backed her words with action.

It was 2010, and she took her message of comprehensive sexual health education into schools. Representing herself, she shared her story and empowered young people with life-giving resources.

She also teamed up with AFC’s advocacy group called Illinois Alliance for Sound AIDS Policy and supported a comprehensive sex education bill in the state’s capital.

Evany was gaining steam. Schools requested her to engage students in difficult conversations about sex, and community health organizations connected her with teachers and classrooms.

The University of Chicago’s Pediatric Infectious Diseases Department soon hired her to work fulltime, speaking to schools with large African-American and Latino populations on the city’s South and West Sides. Her audience ranged from fifth grade to 12th. For years, she worked as an ambassador for change, and so did her state legislators.

A comprehensive sex education bill passed the Senate in 2011 but was never called for a vote in the House. That defeat only encouraged people like Evany and other AFC advocates to breathe new life into the initiative and continue fighting.

In early 2013, a nearly identical comprehensive sexual health education bill was re-introduced in the state House.

During this time, Evany advocated—to lawmakers, to parents, to teens. She used her voice like never before.

“The biggest pushback came from groups, claiming that this bill would give young people permission to have sex,” Evany said. “That simply is not true. Talk to kids. They’ll tell you that learning about condoms and sexually transmitted infections, like HIV, doesn’t encourage sex. And for those kids who want to have sex whether they’re taught abstinence or not, they’re grateful to have information about contraception.”

Her tireless campaign paid off.

On April 17, the bill passed the House and was sent to the Senate.

If passed by the Senate and signed into law by the Governor, the bill will create a standard for existing sexual health education courses in grades six through 12; provide medically accurate, age-appropriate, complete information on ways to reduce sexually transmitted diseases and infections, as well as unintended pregnancies; ensure that school districts can decide what curricula meet their community standards; and empower parents to remove their children from sexual health education courses for any reason, without penalty to students.

Though the bill isn’t law yet, it echoes the work Evany has been doing for years and will hopefully create more sexual health education advocates.

For Evany, her mission is no longer personal. It’s public, and she wants to share it with youth throughout Illinois.