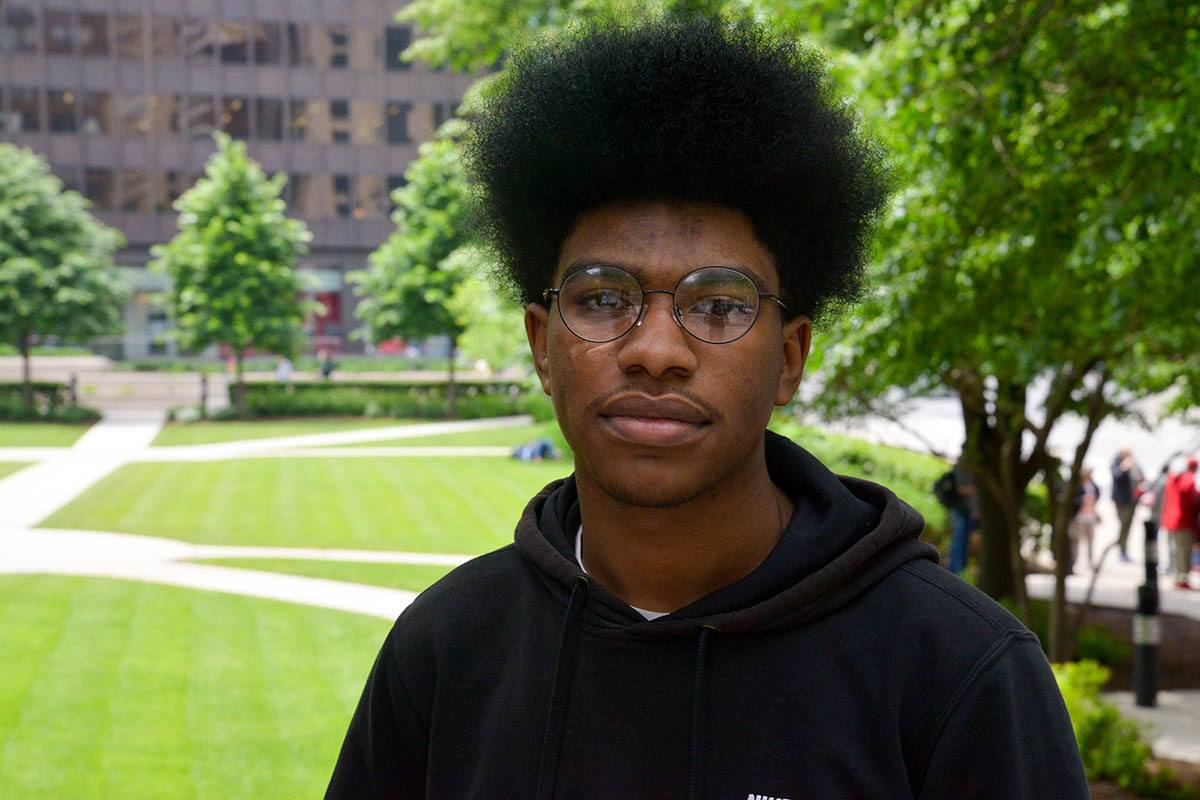 Barely being able to contain his smile, Dyonte explains the significance of the tattoo on his lower forearm. The verse from Romans 8:18 reads “The pain you feel today can’t amount to the joy that’s coming”. Beaming he explains “It means a lot to me because I go through a lot, you know? So it’s like I got that tattoo you know so when I do feel low and when I don’t have motivation and I don’t really have confidence, I look at this tattoo every day. When I look at it, it gives me another motive to not give up and keep striving.” At the young age of 18, Dyonte unfortunately knows all too well about the pain life can inflict. Dyonte is one of the approximately 80,000 people who are experiencing homelessness in Chicago. For the past two years he has been living on his own, going through each day not knowing where his next meal will come from or where he can rest his head at night. Like many others experiencing homelessness, Dyonte would stay several nights outside on the streets, in parks, or in the subway. Regularly, he would not fall asleep until around 3 a.m. due to feeling wary about other people around him, but once 3 a.m. hit he would finally feel at peace and get some rest.

Dyonte is a participant in the Road to Health and Housing program (R2H). This is a new grant funded program that is part of the housing department at AFC. The focus of the program is to work with individuals experiencing homelessness who have been matched to housing program. As a participant in the R2H program, Dyonte works with a Clinical Engagement Specialist who assists with navigating the housing system. This includes obtaining and providing required documentation for housing (i.e. birth certificate, social security card), accompanying clients to housing appointments, advocacy on behalf of clients, and clinical support services. In theory, helping clients who have been matched to housing sounds easy. However, as Dyonte’s story illustrates, individuals experiencing homeless face countless barriers and injustices along their journey.

Homelessness is a societal and human rights issue that is being tackled at every level from federal courts to direct service practitioners. As the issue and awareness about the issue continue to be brought to light through advocates, there is unfortunately still a negative stigma surrounding people experiencing homelessness. Often, this stigma stems from the perception that people experiencing homelessness have brought it upon themselves and deserve their situation. Data from the National Law Center on Homelessness and Poverty found that the top causes of homelessness among unaccompanied individuals were lack of affordable housing, unemployment, poverty, mental health and the lack of treatment, and substance abuse and lack of treatment. Dyonte describes what it was like to be scrutinized by people who saw him sleeping in public. “I can just tell that people are looking at me crazy. It made my confidence go a little low. I just felt weird I guess, like, disappointed in myself”. He wishes that people who saw him on the streets and others on the street would take time to consider that everybody has a situation going on their life and not everyone’s life is stable.

Dyonte’s story is not just about experiencing homelessness. People experiencing homelessness often intersect with other systems such as the health care, criminal justice and education system. For example, Dyonte is among the over 17,000 students in Chicago who are experiencing homelessness. On top of worrying about food and finding a place to sleep, Dyonte is also a senior in high school on track to graduate. Dyonte discussed the challenges he faces as a student experiencing homelessness. “It is sometimes difficult because I wouldn’t get the best sleep as I’m supposed to cause going to sleep at three o’clock in the morning when you outside and stuff and then you got to make it to school at eight. So it’s like you get real tired.” Overall, Dyonte said that he has appreciated his time in school and feels at ease knowing that at least for a few hours of the day he has the chance to get off of the streets and have a meal.

In addition to navigating the educational system, Dyonte has current involvement in the criminal justice system. In the fall of 2018, he was charged with unlawful use of a weapon for possessing a gun and was arrested. He now faces thousands of dollars of court fees in addition to having to keep up with his probation officer. Facing financial hardship, Dyonte fears he won’t be able to pay his fines and probation costs. Additionally, meeting with his probation officer is a struggle due to the financial cost and amount of time it takes. His school day goes from 8:30 a.m. to 12:41 p.m. He only has the opportunity to meet with his probation officer during the week from 3:30 p.m. to 6:30pm, so Dyonte leaves school and heads to his probation officer right away. Taking a train and two buses one way, it takes a grand total of 2 hours to get to his probation office in Bridgeview, Illinois. After paying for the fares of public transportation round trip and paying his probation fees, Dyonte is out $75 in a single day. He often has difficulty coming up with that type of money and has frequently skipped school in order to work odd jobs to cover these costs.

People experiencing homelessness are disproportionately represented in the criminal justice system. In fact, one study found that 54% of individuals receiving homeless services had a history of interaction with the criminal justice system. Often people are bouncing back and forth between these two systems and struggle to break the cycle because individuals with a criminal background are more likely to have difficulty finding housing resulting in them becoming homeless. Individuals experiencing homelessness are often charged with “survival crimes” such as trespassing and robbery, which result in incarceration. This endless cycle perpetuated by the housing and criminal justice system unfortunately does more harm than good. Dyonte wishes that law enforcement would take the time to understand people before making assumptions and judgments. “I wish police knew that everybody is not the same. They should try communicating better. Because when you demand something from someone, you know, once you start yelling I stop listening.” His hope is that police will take more interest in people in the community and take time to understand their situation. “You don’t even know me. Probably if you at least try to get to know who I am or you know ask me if I’m in school or ask me what type of positive thing is going on in my life. Be more willing to listen to the community that you serve.”

At the center of these two issues -- homelessness and interaction with the criminal justice system --Dyonte brings up a point that should not be ignored: People of color are 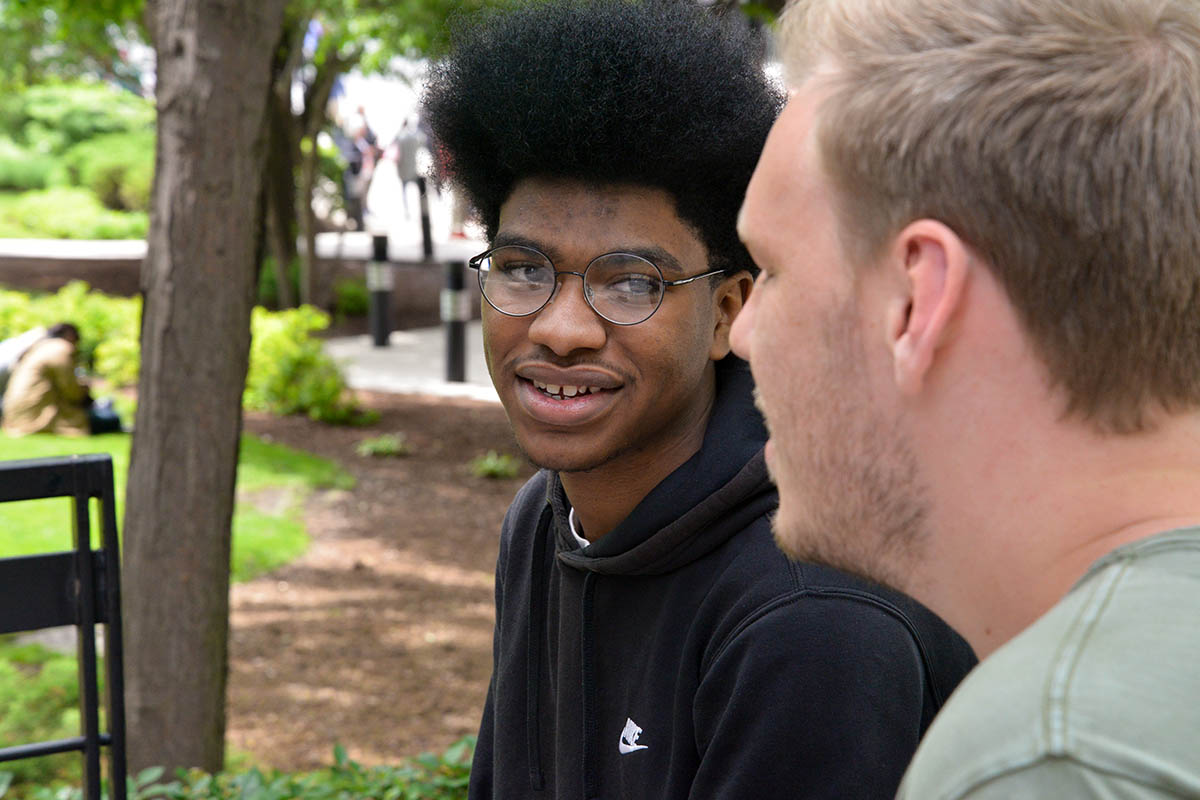 overrepresented in both categories. Despite making up only about one-third of the city of Chicago’s total population, people who identify as Black/African American represent 74% of people experiencing homelessness in Chicago according to Chicago's Point-in-Time Count report. Similarly, the 2017 Annual Report distributed by the Chicago Police Department showed that African Americans accounted for 74% of arrests that year and Latinx people accounted for 17%. Dyonte described his past encounters with law enforcement and the court. “I feel like I was racially profiled. I was just around a whole lot of people that’s not my skin complexion and that don’t have my best interest. None of them took the time to ask me, you know, ‘Why’d you make this mistake? What made you do this?’ Well, you know, they never really asked me anything. All it is is you guilty, you guilty, you guilty.”

Dyonte’s powerful story helps to illustrate what life is like for people who have to navigate multiple systems daily. If you take anything anyway from his story, Dyonte wants you to remember this: “I want to tell people that before you judge somebody, you should get to know that person because everybody has a story. And everybody goes through tough times in life. Be more sensitive to people’s situations”.

To the world, Dyonte might appear as just another young Black man on the streets with a criminal record. However, having worked with Dyonte you should know that at the age of 18 Dyonte is one of the wisest people I have ever met. Compassionate, caring, motivated and bright are only a few words that embody Dyonte. To whoever has read this, whether you work in housing, education, health care, law enforcement, I hope it has inspired you. I hope you read this and begin to start thinking about ways to listen to people better, be more understanding, and take the time to learn about the people you serve. I also hope that it motivates all of us to work together across fields in order to create a system designed to empower people rather than punish. In the words of Dyonte’s tattoo, let’s work together towards the joy that is coming.

Jamie Hock works as a Clinical Engagement Specialist for the Road to Health and Housing (R2H) program under the AFC Housing Team. The Road to Health and Housing program provides navigation and clinical support services to individuals who have been matched to housing through CES. Along with helping clients get connected with housing, R2H also helps individuals establish physical and mental health care. Dyonte has been a part of the R2H program since February 2019. Dyonte was recently matched to a housing opportunity and is currently in the process of working towards getting housed.