The "Little Campaign That Could" 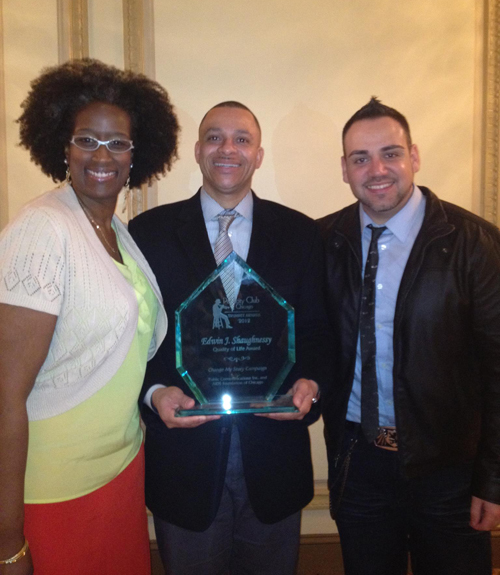 Inside the Palmer House Hilton Hotel, at the premier awards competition for Chicago’s communications professionals, a hush fell over the crowd. The surprise winner of one of the Publicity Club of Chicago’s most prestigious awards – the Edwin J. Shaughnessy Quality of Life Award – was about to be revealed.

The “Change My Story” health promotion campaign of the AIDS Foundation of Chicago (AFC) had already won a Golden Trumpet Award for outstanding achievement in community relations. We had zero expectation of another honor. We scanned the grand ballroom, whispering amongst ourselves, “I wonder who’s going win?”

And then the emcee announced: Change My Story.

We looked at each other, jaws dropped, mouthing “No way!” scarcely believing the moment we were experiencing.

It was a Halle Berry Oscar moment for the Little Campaign That Could. We were stunned that a community-level HIV/AIDS campaign could be lauded as the “foremost contribution of the year for improving the quality of life in our society through communications.”

As a champion in the fight for access to HIV/AIDS treatment and an eventual cure, AFC has carried forward its mission globally, but has given a special emphasis to where the organization began: Chicago’s own underserved communities.  Just about every other person newly diagnosed with HIV infection is African-American, yet African-Americans are just 14 percent of the U.S. population. Those grim national statistics, reported by the Centers for Disease Control and Prevention, are mirrored locally. African-Americans represent 36.8 percent of the Chicago population, but 59 percent of all HIV/AIDS cases.

In answer to a desperate need for actionable public health education, AFC launched its grassroots movement, Change My Story (CMS) in August 2011 in conjunction with the country’s oldest and largest African American parade, the Bud Billiken Parade. Through personal stories from both celebrity and community ambassadors, CMS immediately established an emotional and personal connection with impacted, local communities of color, with the campaign objectives to:

2. Increase awareness of and access to community-based HIV care.

To focus on those most impacted, CMS targeted Chicago’s South Side neighborhoods where rates of HIV/AIDS infections were most prevalent.

Collaborating with partners from Public Communications Inc. and Ventures Unlimited, AFC closely examined the culture of the community, identifying what motivates individuals, how they gather information and what resources they seek out, trust and use. An analysis of the audience identified two specific insights that guide the campaign:

1. The stigma attached to HIV/AIDS deters those at risk or already diagnosed from accessing the appropriate care.

2. A 2010 report from the Pew Research Center on technology trends indicated African-Americans boast the highest rates of any demographic group when it comes to interacting with the community via text message and other non-traditional platforms.

The team’s evaluation of its market research and experience led to the creation of a hyper-customized website, ChangeMyStory.org.  This online community portal combined an urban look with informative messages delivered in “real talk” to connect on an interactive and social level with users. The multi-platform campaign combined traditional media (i.e. bus shelter ads) with everyday technology, including texts, quick-response (QR) codes, video and social media – all driving traffic back to ChangeMyStory.org.

The Change My Story movement aims to empower and inspire people to live life to the fullest by taking control of their health. The campaign is designed to increase awareness of and access to community-based HIV testing, link individuals to ambulatory care and normalize HIV testing and preventative care in African American communities and other at-risk populations. These are big goals.

But the Little Campaign That Could just keeps chugging along. We received the Quality of Life Award on May 9. The next day, we had a photo shoot with renowned photographer Duane Cramer for the second phase of the campaign which will focus on men who have sex with men and debut on June 26 – the day before National HIV Testing Day.

Stay tuned. We’ve only just begun to change the story.

Johnathon E. Briggs and Alicia Bunton are co-creators of the Change My Story campaign. Briggs is Chief Officer of External Relations at the AIDS Foundation of Chicago (AFC); Bunton is AFC’s Director of Care and Quality Improvement.