The Ministry of Being There 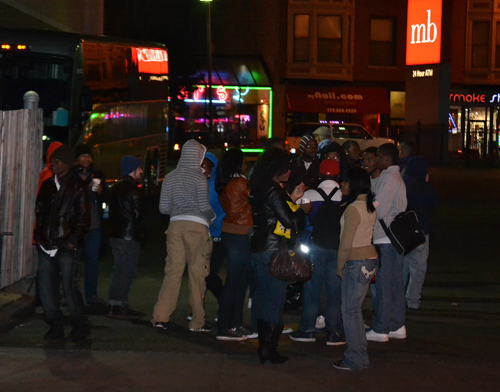 On a brisk early April night in Boystown, with a nearly full moon tilted in the sky, a group of teens  — many of them homeless — waited in a parking lot on the corner of Belmont and Halsted.

Within minutes, two vans belonging to The Night Ministry pulled up to the curb. And soon tables were set up on the sidewalks — one for food, the other for clothes and other supplies. Outreach workers and volunteers circulated in the rambunctious throng of 75 or so youth, most of them ranging from late teens to early 20s in age. 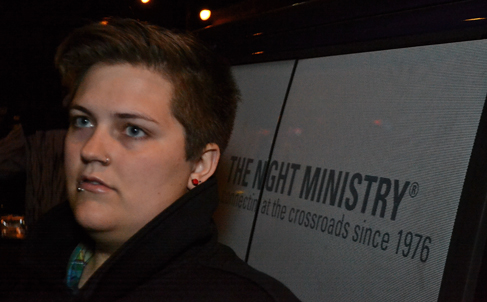 Kimmins Southard (at right) sat inside one of the vans, where she has conducted rapid HIV tests since August, and listened to a young woman with a lot on her mind. Moments later, they emerged. Southard took in the scene: the peals of laughter and playful arguments, the jostling and the embraces. All the while, the youth lined up for food, clothes and advice.

“It’s about coming to where people are,” said Southard, 22, an AmeriCorps HIV tester and counselor for The Night Ministry. "And they come here with whatever they're going through."

Southard, an Ohio native, is one of nine members of the AIDS United AmeriCorps Program. Team members are placed in various organizations, like The Night Ministry, and fulfill an 11-month-commitment of HIV/AIDS testing and counseling. They also plan and implement a long-term community project that benefits people living with and affected by HIV. The AIDS Foundation of Chicago (AFC) partners with AIDS United to administer the program.

For Southard, the lack of a desk job has been illuminating. From August to the end of last month, she’s administered 250 HIV tests. Three people tested HIV-positive and were immediately linked to care at Children's Memorial Hospital. 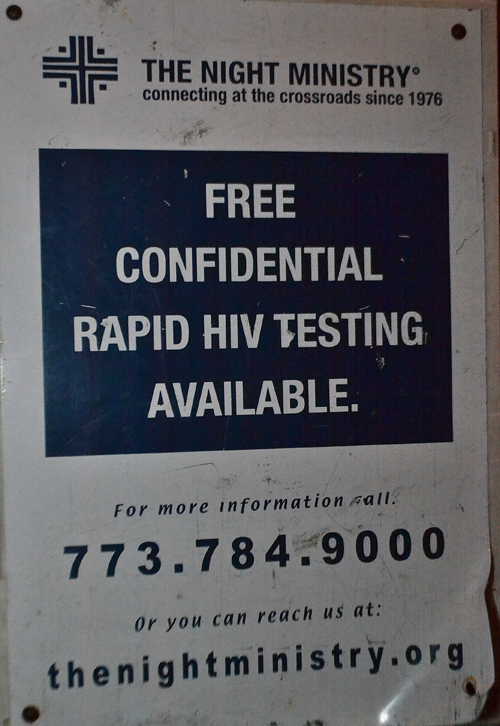 “It definitely has pushed me out of my comfort zone but that’s the reason that I love it,” Southard said. “I’ve learned so much about the value of not being in an office.”

“After several months of knowing me, they might finally feel comfortable enough to get tested,” she said. “Conversations can lead to more of a comfort level, instead of having to go to an unknown place, into an unknown building and tell a stranger a bunch of really personal parts of their lives.”

Twice a week in Boystown, and once a week in Rogers Park, this same convivial scene is recreated. On this early April evening, there were about 75 youth, but there are often two or three times that number on a warm evening, Southard said..

They’re not all homeless. But many of them are and most come because they need the services – food, clothing, advice. They also come for the company. Simply put, they can be themselves here. And for a population of homeless youth, particularly LGBT youth, that’s an uncommon luxury.

“For many LGBT youth, they can stay at home and lie,” Southard said, “or they can leave and be themselves — but be homeless.”

Nationally, LGBT young people are four times more likely to be homeless than their heterosexual peers, according to the National Gay and Lesbian Task Force. And for an estimated 2,000 homeless youth in Chicago, there are fewer than 200 beds citywide.

It’s important to have youth actually want to engage with The Night Ministry, said Menachem Cohen, a rabbi who is one of four members on the youth outreach team. 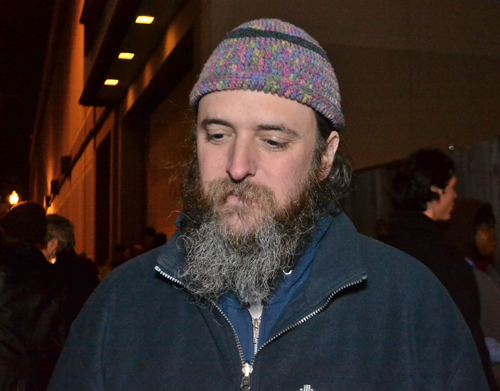 “We call it a ministry of presence,” said Cohen (at right), who joined the outreach group six years ago.

“We define success in many ways,” he said. “Did I have a good conversation with someone? Did we share an inside joke? … Did I make a connection to drill down another layer? Did they ask for advice and was I able to help?”

Case in point: As Cohen talked, a young woman sidled up, hugged him and said, “Shalom.”

“Shalom,” he said, grinning. “I’d hug you back but you have my arm pinned.”

They readjusted and hugged — a ministry of presence.

About 15 feet away, an 18-year-old man who goes by the name Fang Twilight stood in front of the food table to help facilitate the line. A youth volunteer for The Night Ministry, Twilight is also a client who currently sleeps at The Crib, an overnight shelter with 20 beds for homeless youth. 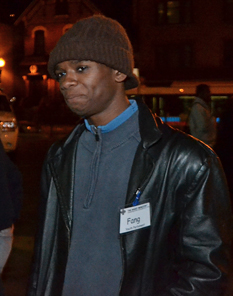 A South Side native, Twilight (at left) was recently living in Memphis, Tenn., with his father, he said. But they got into an argument and he struck out on his own, coming back to Chicago with nowhere to stay.

He stood by his post and looked around at his peers.

“This is important. We’re providing food and clothing, but it’s also just a chill hangout with your friends,” he said. “Even if you don’t have anywhere to stay, you can still fill your belly.”

Twilight said he is tested for HIV every three months. The convenience of having the HIV testing at the popular youth outreach in Boystown is key, he said.