The Sobering Truth of HIV among MSM 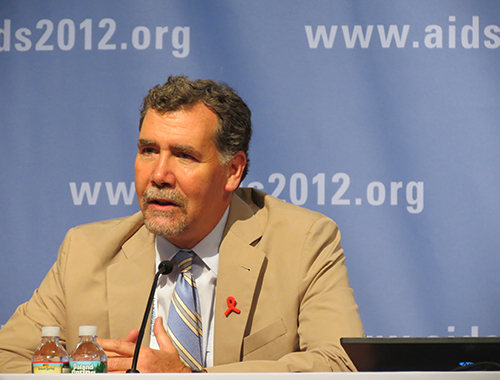 The idea of “turning the tide” against the AIDS epidemic will prove to be no more than a slogan if more is not done to address the growing number of gay/bisexual men infected with HIV worldwide, experts said today.

Speaking at an afternoon press conference today, a panel of experts presented new research – recently published in a series in the medical journal, The Lancet – that confronted the reality of HIV prevalence among MSM (men who have sex with me).  The series concluded that, in addition to medical and scientific advances, more must be done to eradicate the cultural and societal impediments of homophobia and discrimination. Until that happens, ending the AIDS epidemic is unlikely, said Chris Beyrer (at right), a professor at Johns Hopkins Bloomberg School of Public Health.

“Unfortunately, what we’ve identified is the global epidemic of HIV among MSM is a consistent pattern of expanding prevalence, whereas other populations have leveled off,” said Beyrer, a lead writer on The Lancet series.

On average, MSM are 19 times more likely to be infected with HIV than the general population in low- and middle-class countries, according to Dr. Kevin Fenton, director of the National Center for HIV/AIDS. 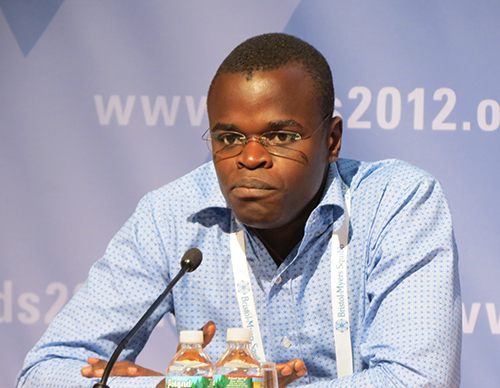 Many African countries do not accurately report numbers of MSM and some do not even acknowledge they have MSM among their population, said Paul Semugoma (at right), an Uganda physician who serves on the steering committee for the Global Forum on MSM &HIV (MSMGF).

Homophobia is rampant in such countries, he said.

“If we don’t start solving these impediments for MSM, we’re not going to do much about the epidemic,” Semugoma said.

In a recent study in Jamaica, 82% of Jamaicans self-identified as homophobic, largely out of fear of HIV prevalence among gay/bi men, said Maurice Tomlinson, legal advisor on marginalized groups for AIDS-Free World, an international advocacy group.

And so many gay/bisexual Jamaicans use petroleum jelly, saliva or even hairspray as a lubricant, he said.

“In those cases, it would be better if they used nothing at all,” Tomlinson said.

To learn more about how HIV affects MSM throughout the world and possible solutions to problem, read the full series in The Lancet titled “HIV in Men Who Have Sex with Men.”