The Stigma of Sandy: Sound Familiar? 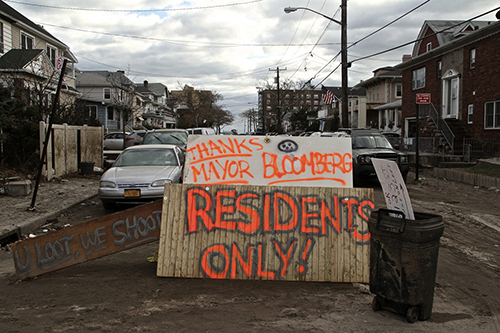 By Julie Davids, Director of National Mobilization and Advocacy for the AIDS Foundation of Chicago

“They were in denial … selfish… thought they were invulnerable.”

We’ve learned that blaming or shaming people for individual behavior that can lead to HIV infection won’t get us out of this epidemic.

Blaming, shaming or defaming those who were in the path of Hurricane Sandy takes the spotlight away from where it needs to shine brightest.

That spotlight should expose the  lack of plans to safeguard a warming coastline, while resources go to making New York City a playground for the wealthy. It should implicate the perfect storm of discrimination, inequity and greed that fuels HIV infections and increased marginalization among people of color, queers, disabled people and immigrants . And it should reveal the historically unjust economics and politics that isolated the poor, the elderly and disabled in remote locations like Far Rockaway that are easily cut off from resources.

Have you ever lived in a shelter? If not, perhaps you wouldn’t be eager to go off to one, sight unseen, cut off from friends and family. And if you have, you may be even less eager to go, especially if you are HIV-positive, queer, gender non-conforming, sick or injured, or elderly. People are resourceful in order to survive in shelters, but it’s not easy – check out this report from Queers for Economic Justice to learn more.

Have you ever tried to get an elderly parent or grandparent to try to do something they don’t want to do, let alone go to an unfamiliar shelter to sleep on a cot? Uhm, it can be pretty hard. And how do you feel about politicians calling your elders stupid and selfish?

It just doesn’t sit right — and it shouldn’t.

But it is instructive.  Policies put in place by elite city mayors, and at other levels of government, have put the housing and resources needed by elderly and people with chronic illnesses and disabilities in the path of big-profit developers and money-making schemes for decades. They have left us ill-equipped for times like now when natural disaster compounds the struggles of everyday life.

It’s not Grandma’s fault, but blaming her is awful easy when times get tough.

This situation isn’t going away any time soon. Up to 40,000 New Yorkers may be in need of housing, a dire reality for system already strained for housing support and decimated by misguided policies and cuts. This city is just one of the areas in need. So get ready for another surge of blame as clean-up begins.

As it has been reported in the New York Times, word that residents at the Hammel Houses, a public housing complex in the Rockaways, may have to leave their homes for good stirred up more confusion and fear. After all, where were they supposed to go? Who was going to help them?

And we must use their insights as a foundation for  policies that deal not just with this crisis but also designing safer communities. Equity is absolutely necessary. We’ll never get there by shaming and blaming.
***

Please consider donating to the CAAAV Organizing Asian Communities (also known as Committee Against Anti-Asian Violence), one of the groups at the forefront of community-based storm relief. CAAAV focuses on institutional violence that affects immigrant, poor and working-class communities such as worker exploitation, concentrated urban poverty, police brutality, immigration detention and deportation, and criminalization of youth and workers.