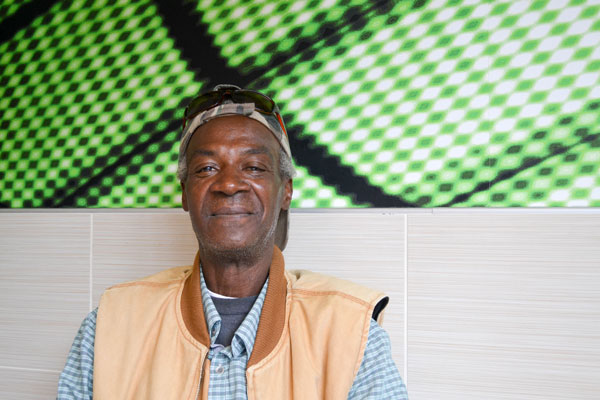 When the weather is nice, Donald King bikes over to Lake Michigan to go fishing. It brings him back to memories of his childhood in New Orleans and spending time with his mother before she passed away. His charming smile and laid-back personality could fool anyone into thinking that he has lived an easygoing life, but he’s had an arduous journey that has led him to where he is today.

Donald moved to Chicago’s North Side in the late 1950s when his mom decided to relocate the family in hopes of finding better schools and better job opportunities. While the change was tough at first, Donald adjusted and made Chicago his home. He went on to graduate from high school in 1975 and soon after got married and had his first son. Over the next few years of his young adult life, Donald worked full-time but was later laid off due to a company shutdown. He then found work at a video service and technology company in the 80s, but it wasn’t long before his hours became more and more scarce. Nonetheless, Donald still managed to support his growing family through the years.

This lasted until Donald had a run in with the law and he went to county jail for 6 months. Upon his return, he found that his wife wanted him to move out of the house and to get a divorce. Donald moved in with his younger brother and then with his older brother, still in search of consistent, full-time work. However, with the recent charge on his record, Donald’s job search became even harder.

“I didn’t have nothing but my Link Card … I couldn’t get a job at the time because I was on three years’ probation. I tried to get a job, but they wouldn’t hire me,” says Donald. “Mostly what I did was stay at home and go fishing.”

In 2012, Donald moved out of his brother’s house and retreated to a men’s shelter in Chicago’s Uptown neighborhood. He lived there for almost 4 years until he was told that he needed to find work in order to stay, but, again, Donald was unable to secure a job. With nowhere left to go, he decided to make the move to the Lawrence Avenue viaduct where a few of his other friends who were also experiencing homelessness started setting up tents in what was called Tent City.

Several of these encampments emerged under Uptown viaducts and served as a makeshift shelter solution for dozens of Chicagoans. Tents of various sizes, shapes and colors lined the sidewalks and created a sense of community among residents.

“When I lived in Tent City, we all looked out for each other to make things right,” says Donald.

He tried to make the best of his situation, but the effects of living on a busy Chicago street for a year took a toll on Donald’s health. He was constantly concerned about protecting his belongings from being stolen, keeping out the rats that frequented the area and, overall, staying safe because he had no real sense of protection or privacy. Due to the constant stream of stress, Donald’s anxiety and high blood pressure were in full gear that year, but he never addressed his health concerns because he was so focused on surviving to the next day.

“It’s helped with my nerves, my blood pressure … I’m more relaxed, more safe,” says Donald in reference to his new home. “I get a good night’s sleep. I don’t have no problems like I used to have … I don’t worry no more.”

“You’re living out in a tent, you know. You never know what’s going to happen. You have to look out,” says Donald. “Imagine you being homeless; It’s rough! If you don’t know nobody and you’re broke … It’s rough!”

Moving into an apartment was always on Donald’s mind, and he spoke to several representatives from Uptown-based social service organizations, who frequently visited Tent City residents, about his goal. However, whenever the possibility of connecting to housing came up, most organizations only had available units on the South and West sides of the city. This was a huge problem for many Tent City residents who, like Donald, call the North Side of Chicago home. He wanted to stay close to everything he knew, but more importantly he wanted to stay connected to his family.

When August 2016 rolled around Donald found out that he was approved to be part of the Better Health through Housing (BHH) program. He was connected to his case manager through H.O.W., who worked with Donald to stay on the North Side of the city. He immediately moved into temporary housing in the Edgewater neighborhood and lived there for close to 5 months. During that time, Donald worked with his case manager to address his health concerns and waited patiently as they searched for his new home.

January 2017, Donald moved into his 1-bedroom apartment and has since seen noticeable improvements to his health.

“It’s helped with my nerves, my blood pressure … I’m more relaxed, more safe,” says Donald in reference to his new home. “I get a good night’s sleep. I don’t have no problems like I used to have … I don’t worry no more.”

Since his move, Donald is able to stay connected to his children, grandchildren and continue to indulge in his love for fishing. In the long-term, he hopes to move back to New Orleans and reconnect with his roots, but, for now, he is focused on finding a full-time job, managing his health and enjoying the comforts of having a place to call home again.