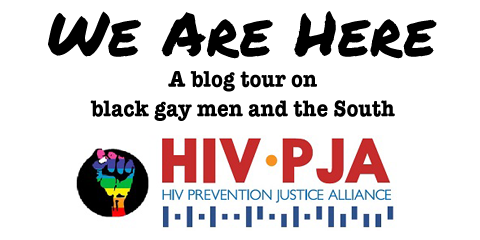 “We Are Here: Black Gay Men in the South,” is a blog tour curated by the Counter Narrative Project and the HIV Prevention Justice Alliance to amplify the voices of black gay men in the South. Each day for the next week, a new piece will be posted. For more information, feel free to contact: thecounternarrative@gmail.com

“Stop calling me RESILIENT. Because every time you say, ‘Oh, they’re resilient,’ that means you can do something else to me. I am not resilient.” – Tracie L. Jackson, Louisiana Justice Institute

Five years ago, on the same day that my cousin Derek, another young Black gay Texan, died of kidney failure after years of poisonous therapies like AZT, a teary-eyed twenty something college student told me I was living with HIV. I had seroconverted and officially joined an epidemic. In the chilly spring of 2009, while squatting a foreclosed home in Chicago, I become one of the thousands of young gay/bi men of color that year who were part of a rising wave of the new infections that continues to this day. The five years following have only seen more new infections, deaths, heartaches and few victories.

For communities of young gay/bi men of color (particularly young Black gay men) in this country, we’re still living in the days of 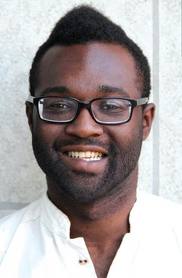 “RENT” and “Normal Heart.” In some U.S. cities, 50 percent of black gay men are living with HIV, and a young Black gay men under the age of 25 has a 1-in-4 possibility of becoming HIV positive. “By the time he is 40 years old, the odds a Black gay men will be living with HIV is roughly 60 percent. One can scour the world and struggle to find a population more heavily affected by HIV/AIDS than Black gay men in the U.S.” (Black AIDS Institute). While the rest of this country can look back at the devastation and sorrow depicted in films, like Normal Heart, and breathe a sigh of relief that those days have passed, for young black queer men like myself the “Plague Years” haven’t ended yet.

For the past 5 years, we’ve been hungry, parched for more Mississippi babies, Zimbabwean sex workers, and Timothy Ray Browns. Here we sit waiting for rectal microbicides, origami condoms and tenofovir gels as the cases of new infections rise and the body count continues. In the same way that the 80s and 90s saw HIV activists utilizing their bodies and the streets of public opinion to push for life-saving medications, community mobilization presents us with opportunities to do more than just waiting. Sometimes, when I can’t sleep, I lay awake and envision a reemergence of public demonstrations where young Black gay men reenact the direct actions of groups like ACTUP on the streets of the 12 cities infamous for their staggering HIV prevalence rates. As I dream awake, I see us in brilliant colors finally expressing the fear, sadness and pain in public that so many of us have carried in our private lives.

With the recent press around the senseless deaths of Black youth like Trayvon Martin, Renisha MacBride, Islan Nettles and Mike Brown, popular culture is (re)membering the sad reality that the lives of Black youth are indeed, “endangered.” We continue to exist in a state of constant attack from a wide variety of sources. We have plenty reasons to be pissed. Our lives are on the line. Anger can motivate, shift stone and shake institutions when it’s concentrated and well directed.

Consider this: This year saw two disturbing instances of black organizations in the struggle against HIV being directly disenfranchised by governmental institutions.

As Phil Wilson of the Black AIDS Institute points out:

Back home here in Illinois, the Windy City Times reported in September of this year:

“In July, the Illinois Department of Public Health (IDPH) informed 20 [HIV] service providers that money to those agencies for FY 2015 through the African-American HIV/AIDS Response Act would not be allocated to them. Those agencies were awarded the money through a request for proposal process, and most made budgeting decisions based on those awards.”

It seems Illinois legislators and the Illinois Department of Public Health never allocated a revenue stream for the African-American AIDS Response Act after literally taking the funds and channeling them to other state projects. All of a sudden these 20 HIV service providers who sought to address the Black HIV epidemic were suddenly scrambling to stave off staffing cuts and, for some of them, the threat of permanently shutting their doors. How else are Black communities to view this other than clear indicators of a systematic dismantling of our communities’ power in addressing the HIV epidemic? Calling me resilient, while systematically starving and disregarding our communities of resources reeks of institutional duplicity.

A Public Health Crisis on the Horizon

It’s a joke that I live in one of largest metropolises in the world and that the some of the only free STI testing and treatment clinics in this grand city only see 10 clients a day. It’s pathetic that these clinics are the only free options in some of the highest HIV prevalent neighborhoods. A National Coalition of STD Directors survey found that 69 percent of state and local STD programs reported funding cuts and 39 clinics supported by such programs had to close their doors between 2008 and 2009.

And yet the planet (and definitely this country) stands on the edge of a looming public health crisis: multidrug-resistant gonorrhea is spreading and we could easily be facing a global crisis on our hands.   Note the three populations the National Coalition of STD Directors lists in its in FY2015 Funding Fact Sheet as the most impacted by this potential epidemic:

“While this issue is a grave for all sexually-active people, drug-resistant gonorrhea will hit certain populations harder than others, including men who have sex with men (MSM), blacks and young people.

I hate to be an public health harbinger of doom, but imagine how expensively devastating multidrug-resistant gonorrhea could become for young black MSM across the U.S. Considering the dearth of free and low-cost STI treatment services within this country, the fact nearly half of all STIs go untreated each year, and that living with other STIs makes one more susceptible to HIV, antibiotic-resistant gonorrhea could certainly lead to hundreds of new infections of young black MSM and feed into the current rising numbers. And, without an appropriate government response, I can’t help but consider it premeditated murder by institutions that care little for the lives of young black gay men like me.

As a Southern black queer man, governmental and cultural indifference feels all too familiar to me. As a child in Texas, the only gay men I knew were a crew of my gay cousins and uncle who I was discreetly warned not in stay in a room alone with or drink behind. These men lived in silence until a series of “accidents” (car crashes, health problems, and suddenly lost lovers) forced them to become public about their sexualities and HIV statuses. Even as I watched them age, raise children, battle sickness, and lead church choirs, they were rarely celebrated or even recognized as whole beings. Even now, my Southern family relegates my partners to “my special friends,” their names forgotten. Often our families and communities expect that we will operate as pallbearers for our blackness, silently carrying their religious biases, patriarchal expectations, and quiet disdain, all the while keeping our mouths shut and heads down. For generations of Southern Black gay men, silence is our legacy; it’s something we’ve passed on like genetic predispositions to hypertension and arthritis. But as the bodies pile high, that silence must end. No wonder I smell revolt in my dreams.

For us to turn the tide on this epidemic, we have to start by proving to young black gay/bi men that we genuinely care about their lives, not just their HIV statuses. I would love to see organizations and individuals who serve and care for folks living with HIV embracing hashtags, like #BlackLivesMatter, as less of a slogan and more like an organizational mantra in the struggle against HIV. As a reminder that we are not just your clients/consumers, or simply numbers for your grant scopes or units of service to validate someone’s salaries; we represent nearly half of this epidemic in this country, our lives matter and we’re more than resilient.

Originally from Houston, Texas, Donté Smith is a sexual health educator, community organizer, and deejay currently living in Chicago, Ill. Smith is also a former member of IL ASAP (Illinois Alliance for Sound AIDS Policy) and a current member of the HIV PJA Steering Committee at the AIDS Foundation of Chicago and is currently the Youth Outreach Coordinator for the Center on Halsted.