What's NATO Got to do With HIV? 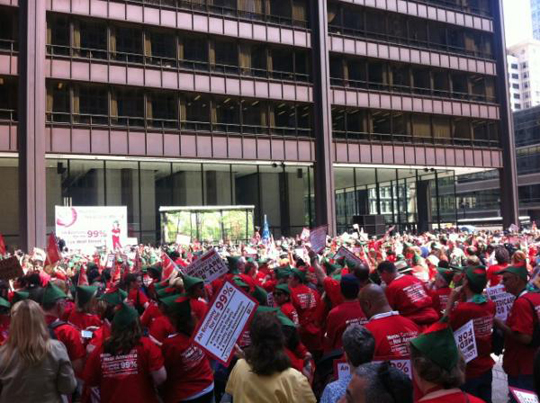 Activists rally in support of the Robin Hood Tax ahead of a NATO Summit in Chicago, IL. Photo courtesy of Occupy Wall St.

CHICAGO, IL - Usually, when NATO descends on a city it's more about destroying targets than being one. This week, however, activists from across the world have flipped the cross hairs as the NATO summit in Chicago is targeted as one of the biggest opportunities for public activism in 2012.

But what does a 63-year-old military alliance have to do with struggles for social justice (let alone the struggle to end AIDS)?

Simply put: the NATO Summit is an opportunity to put our misplaced priorities as a society under the spotlight.

NATO and its biggest contributor, the U.S. military, are among the largest public investments on the planet. Hundreds of billions of dollars are spent every year equipping and running the alliance and the militaries of its member countries. Even more has been spent over the last decade as NATO has waged war in Afghanistan (oddly, nowhere near the North Atlantic).

Every single dollar spent on the military is one less dollar available for social services, health care, education and infrastructure. Every bullet we buy for NATO is one less prescription filled at the local clinic.

For the cost of one new F-35 fighter plane we could fully fund the AIDS Drug Assistance Program. For the cost of all 2,000 F-35s the U.S. has ordered we could treat everyone with HIV in the whole world and have enough left over to start tackling health care, education and jobs here at home. (And if we combined targeted military cuts with smart new revenue ideas like the Robin Hood Tax -- as AIDS activists, nurses and others pointed out in a spirited rally today in Chicago -- we’d really be in business.)

The Cold War ended 20 years ago and yet we continue to fund a massive military infrastructure whose purpose is to defend us from a threat that no longer exists. At the same time, real threats – the eroding middle class, the lack of economic and educational opportunity, communities shattered by preventable disease and violence -- have been largely ignored.

These two phenomena are not unrelated. They are fundamentally linked.

Why does the NATO Summit matter? Because we know another world is possible, one where we value life over death, love over fear and people over profits.

So when you turn on your TV and hear fearful reports of protests causing traffic delays and snarled commutes remember: The real story isn’t the peaceful protests in our streets, but the decisions being made inside McCormick Place about where to drop the next million-dollar bomb.

Jim Merrell is National Coalition Development Coordinator for the AIDS Foundation of Chicago and a lead organizer for the HIV Prevention Justice Alliance (HIV PJA). Community organizing for rational, humane public policy to assist low-income communities, human rights protections for LGBTQ people and reversal of mass incarceration are central strategies of the HIV PJA to address drivers in the HIV/AIDS epidemic. Learn more at preventionjustice.org.