"You're not a second-class citizen because you're HIV-positive. You're a human being."

HIV — it’s not just a problem in large metropolitan areas. In fact, about one-third of the HIV/AIDS cases in Illinois are among people living outside of Chicago. That’s why places like Open Door Clinic are needed — to serve people living with and at increased vulnerability for HIV in places like Aurora and Elgin.

Sacha Urban, a passionate HIV/AIDS advocate and longtime participant in AIDS Run & Walk Chicago, supports the work of Open Door Clinic by serving on the organization’s board of directors and providing leadership in fundraising and development. 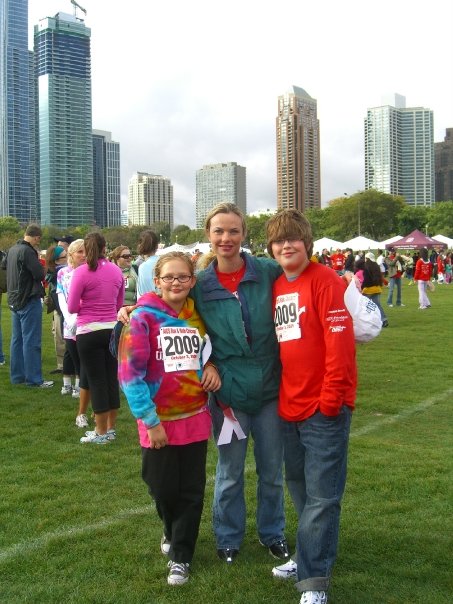 “I have a master’s degree in nonprofit management, and when I started to look around at my options for doing some community work, I found Open Door Clinic, and it just seemed like such a great fit.”

Urban moved to the US from Switzerland at age 21; she lived in California briefly before settling in at the University of Indiana in Bloomington.

“The University of Indiana seemed like the right place for people to come out and be themselves,” said Sacha. “I made a ton of friends in the LGBT community there.”

But after moving to St. Charles, Ill., with her husband, Urban had trouble finding that same connection to the LGBT community. That’s when she found Open Door Clinic and saw that the LGBT community and the HIV/AIDS community were marginalized by the social landscape of the suburbs and needed her support.

“HIV is not a priority out here,” said Urban. “People in the suburbs know more people who are affected by cancer than HIV. It’s a reality — and a segment of the population — that I don’t think most suburban people want to think about.”

And it’s a disease that can create fear and anxiety in some people. “Recently, a woman came to Open Door Clinic and was diagnosed as HIV-positive. She was an older woman — a grandmother.

told her that he couldn’t pray with her anymore because of her HIV status. I just think that’s terrible. You’re not a second-class citizen because you’re HIV-positive. You’re a human being.”

Bringing awareness and changing hearts — in the suburbs, in big cities, wherever stigma against HIV lives — is why Urban participates in AIDS Run & Walk Chicago, and has for the past five years. “I’ve walked, and then I started running in it. I’ve done it alone and with my kids.”

Urban’s experience with AIDS Run & Walk Chicago even prepared her to join the Team to End AIDS, with whom she trained to run the marathon in 2013.

“Stigma against HIV/AIDS is still around. I run with AIDS Run & Walk Chicago to raise money and awareness to end the hurtful, negative views people have of the disease.”

Join Sacha and thousands of other runners and walkers on Sept. 14 — join or donate to AIDS Run & Walk Chicago today at aidsrunwalk.org.