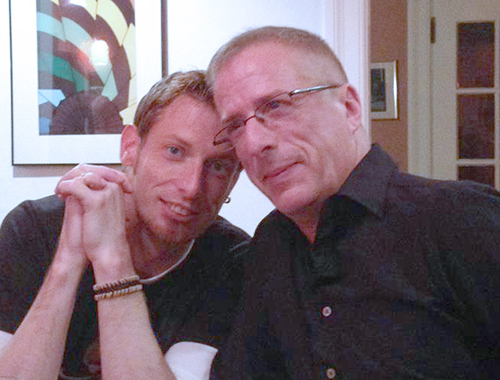 The two lovers gave each other matching silver engagement rings for Christmas.

Tom Menard and Topher Duerkes, engaged for a year, may be swapping them in for wedding rings sooner than expected.

Illinois’ same-sex marriage bill, sponsored by state Sen. Heather Steans, D-Chicago, garnered national attention when it steamrolled its way into a Senate committee vote last week. It passed out of that committee but was shelved by the so-called lame duck legislators. The newly sworn in members of the General Assembly will presumably pick it this week week after being sworn in.

Tom Menard, on right, with his partner, Topher Duerkes, in 2009.

When Illinois joins the other nine states that have legalized same sex marriage, it will be a historic moment for the Prairie State. It will carry special meaning for those, like Menard and Duerkes, who have waited years for that right.

“The big piece for us is the public recognition. We’ve always felt like civil unions were a half measure,” said Menard, who works as vice president of operations for the AIDS Foundation of Chicago (AFC). “We don’t want to feel like half citizens. We want equality.”

The AIDS Foundation of Chicago staunchly supports equal rights and access to health care for all people, regardless of race, gender, sexual orientation or economic status. Stigma and homophobia fuel the AIDS epidemic.

In the long run, legalized same sex marriage also figures to have an impact on the ongoing efforts to end the AIDS epidemic. It’s no panacea; same sex marriage stands to have little impact on some populations at risk for HIV, such as transgender youth or African-American women.

But the fewer barriers to health care and the less social stigma, the better. There has been some early research suggesting that gay men who live in states condoning same-sex marriage are both healthier and happier.

The right to marriage guarantees smoother access to health care through partners’ benefits, said Jim Pickett, AFC’s director of prevention advocacy and gay men’s health. And the more profound long-term change could be in the gradual reduction of LGBT stigma, Pickett said.

“I do think having marriage equality will lessen the stigma of being LGBT,” Pickett said. “And, in time, it could lead to fewer gay kids getting kicked out of their homes and ending up on the corner of Belmont and Halsted, putting themselves at risk for HIV just to get a meal and a bed to sleep in.”

The message of equality could make a difference.

“It sends a message that you are equal to anyone else in a committed relationship,” Menard said. “It wouldn’t be right away, but maybe some of the stigma and unhealthy behavior would eventually go away.”

For Menard and Duerkes, the difference would be immediate and significant. In many ways, they are already like any other married couple. They recently bought a home in La Grange Park, where they enjoy the suburban luxury of tending a garden. Menard does most of the cooking and handles the finances. Duerkes is the handy man of the house.

They are already planning certain wedding details. Once hitched, they would have equal access to the federal benefits of marriage. And they would be recognized by society as a married couple.

That means a lot to Menard, 54, who remembers coming out as gay at age 20 in Hartford, Conn., in 1978. In those days, a lookout person manned the door of the bar so they could dance with members of the same sex, he recalled.

“I never really expected to see it in my lifetime,” Menard said of legalized same sex marriage. “It’s exciting. This is the person I want to spend the rest of my life with.”